Give Millennials A Chance To Show Their Patriotism The Right Way

Customs and traditions are firmly ingrained in those who serve in the military. Symbols such as our nation’s flag and... 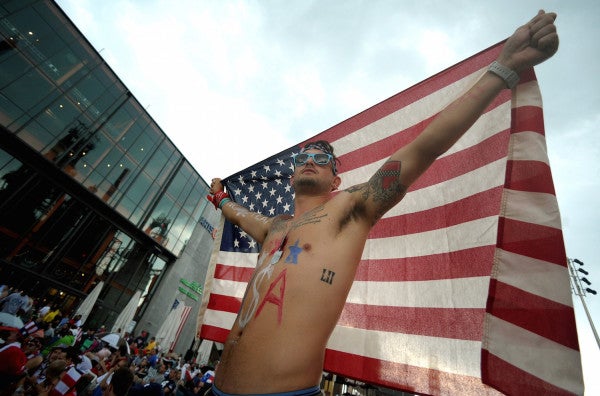 Customs and traditions are firmly ingrained in those who serve in the military. Symbols such as our nation’s flag and ceremonies that surround it evoke powerful emotions to service members and veterans. So when I read Will DuVal’s Task & Purpose article on millennials’ problem with patriotism, I completely agreed with his argument that the American flag is often misrepresentative on boardshorts and bikinis and that patriotism gets boiled down a cheap tagline of “U-S-A! U-S-A!” at a frat party. And it’s not just at frat parties. At sporting events, concerts, and political rallies, you can hear the chant over and over again. To some, it can appear cheap and hollow — a cop out to display patriotism without the required investment and sacrifice. But for many, this appears to be the only way to demonstrate such emotion. For millennials who may not have been old enough to serve immediately after the Sept. 11 attacks, how do they spontaneously respond to the death of Osama bin Laden? Are millennials really doomed to show their love of country through half-hearted displays of patriotic fervor?

DuVal grapples with the issue of the “summer soldier and sunshine patriot,” seemingly just as torn as I am on these displays. He condemns the spontaneous celebrations of Osama bin Laden’s death, but condones the chant of “U-S-A!” at the end of the 2004 film “Miracle.” For a vast majority of the population, the opportunity to make history seems so far out of reach. Defining moments in our nation’s history are so often the actions of a relative few, but many in our country still want to feel connected to their significance. And for those who are not directly part of an event, public gatherings seem the best way to express their patriotism. Whether it’s a spontaneous rally in front of the White House or in Times Square, or Fourth of July and Memorial Day parades in a small American town, individual citizens want to be part of something greater, to validate their feelings for their country, and affirm through a collective action that the sum is greater than our individual parts. This is not something new to the millennial generation, and it’s not going to go away anytime soon. To be honest, I enjoyed sharing in the U.S. women’s soccer team victory over Japan in this year’s World Cup without feeling that patriotism was being diminished.

So how should millennials manifest their patriotism? As members of the armed forces, there is a tendency to correlate patriotism to service and sacrifice. This is certainly applicable to police officers, firefighters, teachers, and any other profession that the public has perceived as service to community and country. The values of service and sacrifice as a member of the armed forces or public servant are readily apparent. But there are plenty of millennials who are service industry workers, bankers, small business owners who don’t inherently fit the model of service and sacrifice. Are we really going to deny them the option to display their love of country?

Many American patriots go through their lives unsung, their stories drowned out by whatever has attracted the collective attention of our population. For many, patriotism is a visual and audible experience, and this is where it can appear to be cheap. Patriotism can become lip service quickly, and as Aesop observed, “After all is said and done, more is said than done.”

But to others, patriotism cannot be measured in flag waves per minute or the collective volume of fans singing the Star Spangled Banner. It is something that is practiced in everyday life; striving to provide the opportunities of a free society to family, friends, and neighbors. It is seen when people exercises their civic duty to vote, and wear an “I voted” sticker not with the pride of supporting one political party over another, but with the recognition that they have taken part in an act that many throughout the world would dream to do. These are the small measures that often go uncounted, but prove more enduring than a rally or parade. As a nation, we need to cultivate patriotism that runs through the veins, not just what is worn on the sleeve.

When I was a volunteer firefighter, we had a recruit named Ashley who desired to become a member of the department. Ashley struggled with weight issues, which prevented her from completing the physical tasks required to ride the trucks and respond to emergencies. Nonetheless, Ashley came to every drill, meeting, and work detail she could. She came to learn and help out where she could, but also had a plan to overcome her weight issues, all the while aware of the reality of how much time and effort it would take.

Eight years later, Ashley has endured numerous surgeries and a demanding physical and nutritional regimen to get herself to her goal. It’s been a long road, but she’s remained undeterred to achieve results. Recently, Ashley posted a photo of herself on social media with the American flag draped over her shoulders, fists at the ready (her second goal is to train as a mixed martial arts fighter).

Ashley has drive, tenacity, and resilience, traits that are so much a part of what it means to be American. So seeing that photo of her in my newsfeed, cloaked in the American flag, aware of her own flaws yet determined to improve and succeed no matter the cost, I couldn’t think of anything more patriotic. And there is no doubt that there are plenty of patriots like Ashley within the ranks of millennials.

We can all learn something from Ashley’s story on how to become better patriots. Not everyone wants to be a firefighter, soldier, or any other job traditionally held as a service profession. And nor should we expect them to. But like Ashley, we can expect millennials to apply determination and drive to their everyday lives and channel those traits to better their communities.

DuVal points out in his conclusion that despite his alarm for behavior exhibited by millennials, he recognizes the “tremendous amount of energy and passion” that this generation holds. While I am not as alarmed as DuVal is, I completely agree the millennial generation (as with all American generations) has great potential and passion that can be harnessed to better serve our country. Civic virtue married with individual passion can be applied to countless acts, whether it’s participating in municipal meetings or volunteering with local recreation centers and service clubs. Couple these acts with the values Ashley embodies — grit, determination and resilience — and patriotism among millennials looks less like a problem and more like an opportunity.