New Movie ‘War Dogs’ Is Ridiculous In All The Right Ways

The young, hefty, sweat-soaked gun runner slams the accelerator of the dilapidated jalopy and checks the sideview mirror. “Objects in... 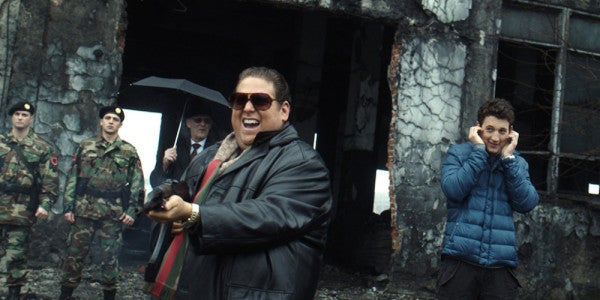 The young, hefty, sweat-soaked gun runner slams the accelerator of the dilapidated jalopy and checks the sideview mirror. “Objects in mirror are closer than they appear,” it taunts, also displaying a cohort of Kalashnikov-armed Iraqi insurgents in the not-so-distant distance. Bullets whiz by his face, barely missing their intended targets. His partner is in the passenger seat, and shouts over the fire of AKs: “They’re gettin’ closer, come on man, go!” The truck is on empty, so the old Jordanian smuggler dangles perilously out of the side of the truck as he attempts a refuel. They’re losing speed, and the insurgents are gaining. Everyone panics. All seems lost.

And then America shows up in a mist of sand — with two Humvees and a huey — to save the day. An awe-struck captain inspects the load of Berettas that survived the drive through Fallujah and Baghdad. “You drove these… through the triangle of death?” he asks incredulously. The two 20-something Miami natives, who have never seen combat in their entire lives, can’t believe it themselves.

“War Dogs” is based on the true story of these two amateur arms dealers — David Packouz and Efraim Diveroli — who, in 2007, won a $300 million deal with the Pentagon, beating out Fortune 100 war giants like Lockheed and General Dynamics. Originally profiled in Guy Lawson’s 2011 Rolling Stone article turned book deal, “Arms and The Dudes,” the story was adapted for film by director Todd Phillips.

Related: One Of The Best Books About The Iraq War Is Now A Movie »

Phillips — who also directed blockbusters like “The Hangover” trilogy, “Old School,” “Starsky and Hutch,” and “Road Trip” — stayed true to his beloved “male mayhem” genre, as the director describes, with “War Dogs.” But this time around, he’s opted for a pinch of Scorsese-esque badassery and money lust, hearkening to “The Wolf of Wall Street” and “Goodfellas.”

There’s a reason the military community enjoys these kinds of crime dramas and sordid comedies — we want movies with tremendous verve and thunderous action. We crave an exhilarating kind of buzz. We love vicariously riding those kind of highs and revisiting the familiar limbo where we’re confronted with moral and legal ambiguity. We find something darkly humorous about getting into trouble and something oddly charming about unabashedly offensive manners. And we’re titillated by gunslinging and violence. That’s our catnip.

“War Dogs” appeals to this kind of taste. The film follows Packouz and Diveroli — portrayed by Miles Teller and Jonah Hill, respectively — as they punch into the shady gray zone of international arms dealing. Diveroli conceptualizes and orchestrates the operation with a simple, albeit genius business model — he merely brokers the deals, researching the cheapest prices for weapons and ammo, and then undercuts the competition. To make millions, he only has to win what he calls “the crumbs” — a small amount of the Department of Defense’s multibillion-dollar deals.

But Diveroli can’t manage on his own — he needs help scaling his one-man operation, so he enlists his trusty childhood friend, Packouz. Unlike Diveroli, Packouz’ reasoning for getting involved in the world of arms dealing comes from a place of love — for that of his growing family and his best friend. Early on, he resists Diveroli’s every move, bemoaning anti-war sentiments and fears of disreputable business practices, but Diveroli wins him over. He explains that new laws under the Bush administration allow any business, no matter how small, to bid on government contracts. He convinces Packouz that although war is an awful thing, it’s awfully profitable.

Soon after bringing Packouz on board, Diveroli discovers a massive deal with the Pentagon that would make their burgeoning company central players in bolstering the global war on terror — and they wouldn’t even have to step foot on a battlefield to strike gold.

“Look, the pentagon wants 100 million rounds of AK-47 ammo in the middle of a worldwide shortage. Where do you think they think that’s gonna come from? A bunch of shady motherfuckers,” Diveroli urges Packouz. “This is the job. To do business with the people in places the U.S. government can’t do business with directly. It’s as simple as that.”

The frat boy-like duo end up winning the deal by a long shot, and mayhem ensues.

Gunning for success, Packouz and Diveroli take the audience on an exhilarating globe-trot — from the glitzy streets of Miami to war-torn Iraq and mob-dominated Albania, sarcastically cheering, “God Bless Dick Cheney’s America” all the way through.

I reached out to the real David Packouz, asking him what he thought about the film.

“There was a lot that happened in real life that wasn’t included in the movie or was changed, but life is always more complicated than depicted in Hollywood movies,” Packouz told Task & Purpose. “You can’t fit years of life into a couple of hours, so that’s to be expected.”

“I was actually very pleasantly surprised by how accurate the overall arc of the story and many of the small details were. And I love the script; it’s fast-paced and entertaining,” he added.

Most service members and veterans will enjoy “War Dogs.” Hill delivers a hilarious and captivating portrayal of sociopathic Diveroli, giving the character an intoxicating chutzpah and a laugh like rusty brakes on an old bike. His brash vulgarity and “I don’t give a fuck” factor are in line with typical military humor. The action, the guns, and the skullduggery throughout the film will keep E-1s through O-10s equally entertained.

In the end, it’s hard to deny that “War Dogs” is a blast.