With six Oscars and nine nominations, Kathryn Bigelow’s 2008 thriller “The Hurt Locker” is one of the most critically acclaimed... 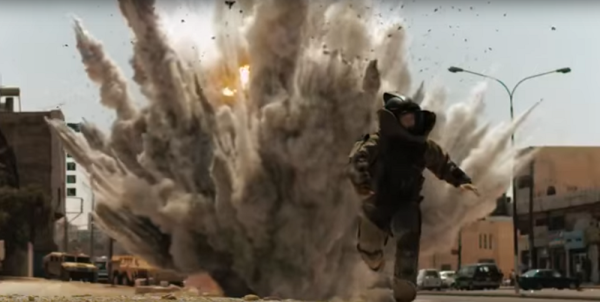 With six Oscars and nine nominations, Kathryn Bigelow’s 2008 thriller “The Hurt Locker” is one of the most critically acclaimed war movies to come out of the Global War On Terror. The film follows a team of Army explosive ordnance disposal technicians in Iraq, where they wage a seemingly endless war against the preferred weapon of their enemies: the improvised explosive device.

“The Hurt Locker” is beautifully shot, but that’s about the only nice thing I’m going to say about it. For all of its accolades, the film is incredibly polarizing, with civilian and veteran audiences having very different opinions.

“He isn’t an action hero, he’s a specialist, like a surgeon who focuses on one part of the body over and over, day after day, until he could continue if the lights went out.”

To get a more on-the-ground perspective, we asked an Afghanistan War veteran and former Army explosive ordnance disposal technician, Kollin Knight, how he would describe the film’s protagonist.

“A toolbag idiot,” Knight tells us.

The film takes a lot of flak for its lack of realism, and even more for Renner’s character, James, who is presented as some no-fucks given cowboy, in a field where precision and caution are vitally important, explains Knight.

Related: 6 Reasons Why ‘Pearl Harbor’ Is A Terrible War Movie »

Here’s a breakdown of everything “The Hurt Locker” gets wrong and why it is without a doubt the worst Iraq War movie of all time.

No EOD tech would just man-handle a daisy-chain of 155s.

When James uncovers six 155 artillery shells wired together into a massive IED, he pulls on it for no good reason.

“And he just lifts up six of them, all daisy-chained together, which A: You’d never do that by hand, it’s amazing that he did. B: How the fuck is one arm that strong to just pick up all of these 155s?” says Knight, who adds that each shell can weigh between 70 and 100 pounds.

Skipping over the superhuman strength required to lift 600 pounds worth of ordnance, one-handed, there’s another problem: Nobody would do that, even if they could.

“You don’t know what you’re doing, what’s in there, which is why you don’t just pick shit up by hand and toss it around,” says Knight. “Which is why we stress using robots and doing things remotely and slowly and cautiously, instead of just “Oh shit, I just found a bunch of them, I’m gonna pick them all up.”

There’s no way that guy would be a team leader.

“Throughout the movie, the team leader is just portrayed as having no regard for his life, and so no regard for his team,” says Knight. “He wouldn’t even be team leader certified anymore, at that point. For the shit that he does he could easily lose his certification, end up in prison, or get completely removed from EOD. Realistically it wouldn’t happen. He would not exist.”

Then there’s the whole “I’m hot shit” image that he’s hellbent on maintaining.

“He also walks up to the device, I think the first one he does is a car bomb with some ordnance in the trunk and he takes off his bomb suit and is like, ‘If I’m going to die, I’m going to die comfortable.’ And you’re just like, what the fuck?” Knight asks, rhetorically.

Knight explains that while there are times when an EOD tech would remove his or her bomb suit, it’s never without good reason.

“He had complete access to everything, he wasn’t being limited at all, he was just like, Ahh, I want to feel alive and be hot shit,’” says Knight.

If the team leader was looking to die comfortable, he should have taken a note from this guy.

On top of that, he decides to go for a late-night jog in a hoodie, in Baghdad.

“And of course, there’s that scene where he goes outside of a FOB and hunts down this professor for some reason, and he’s just walking around, out in Iraq, in a hoodie, with a gun, and you’re like, ‘What the fuck?’” says Knight.

Nobody does this. It simply doesn’t happen. It makes no sense, and anyone who’s ever served in a post-9/11 warzone probably reacted to that scene the same way: What the fuck?

The EOD techs in this movie are all safety violators.

“They’re just blowing stuff up outside of the FOB which are regular EOD operations and you know, his team members are already pretty upset with him and they’re about to set up the shot,” says Knight of Renner’s character.

“They’re ready to go, they’re about to blow it up, and he’s like, ‘Oh, I forgot my gloves,’ and he just goes back down into the shot hole, a couple hundred feet away, with the trigger live, armed, and you’re walking back down into the shot and that’s a huge safety violation and you’re an idiot because you’re walking up to live explosives at that point that can blow you up.”

The team leader keeps evidence as momentos. In a shoebox, no less.

“One of the things we get hounded on when we show up in country is how important evidence collection is” says Knight, who explains that in addition to disposing of unexploded ordnance, and destroying IEDs, they’re also responsible for collecting and identifying evidence so government agencies can assist with tracking down the bombmaker.

“So to have a box of stuff that’s valuable like that and sitting under your bed for no good reason, that’s punishable by federal law I believe,” says Knight. “He’s just like, ‘Uh, it’s a box of stuff that nearly killed me,’ and you’re like, ‘No you fucking idiot, you should turn that in so they can find the bombmaker!’”

EOD techs are highly trained, but they’re not qualified snipers.

“Of course everyone hounds on the ridiculous scene where they come upon the British SAS guys and somehow they’re able to operate a Barrett .50-cal better than any of those guys and snipe a dude from a mile away and all this stuff. Everyone recognizes the absurdity of that.”

Though EOD techs do receive some training on the .50-cal as a way to destroy an IED by shooting it, they’re not snipers.

“We get to fire them once a year, as a fuck around, because it is a legitimate defusing method in some really obscure cases, so we still train with it, but it’s not like we’re gonna be better than any SOF guys,” says Knight.

EOD is a support element, so where’s their overwatch?

In one scene, the team realizes a bombmaker is nearby, and what do they do? They peel off one by one and go searching for him. That’s a lot of ground for three dudes to cover, especially when you consider they probably had (or should have had) an overwatch element nearby.

“You have a security element that could maybe do that, but even then, they’re smart enough to not split up into one-man teams, you know?” says Knight.

“The Hurt Locker” gives people the wrong idea about EOD.

“We’ve had guys join the career field who come to EOD school and say, ‘I saw ‘The Hurt Locker’ those guys are badass I wanna be that,’” says Knight. “They think we’re some badasses who go and do all these crazy things and just have no regard for our own life, and it’s like no, most of us have a lot of regard for our own life. We don’t like getting blown up either.”

Knight also adds that yes, while EOD techs may play a fast and loose with regulations — raise your hand if you’ve ever seen one with unbloused boots and cuffed sleeves in country — they’re professionals when and where it counts.

“If something’s on the line, something that matters, we understand the seriousness of it. When we’re in the moment we’re 100% on top of it,” says Knight.