Hollywood is already making a movie about the Afghanistan withdrawal 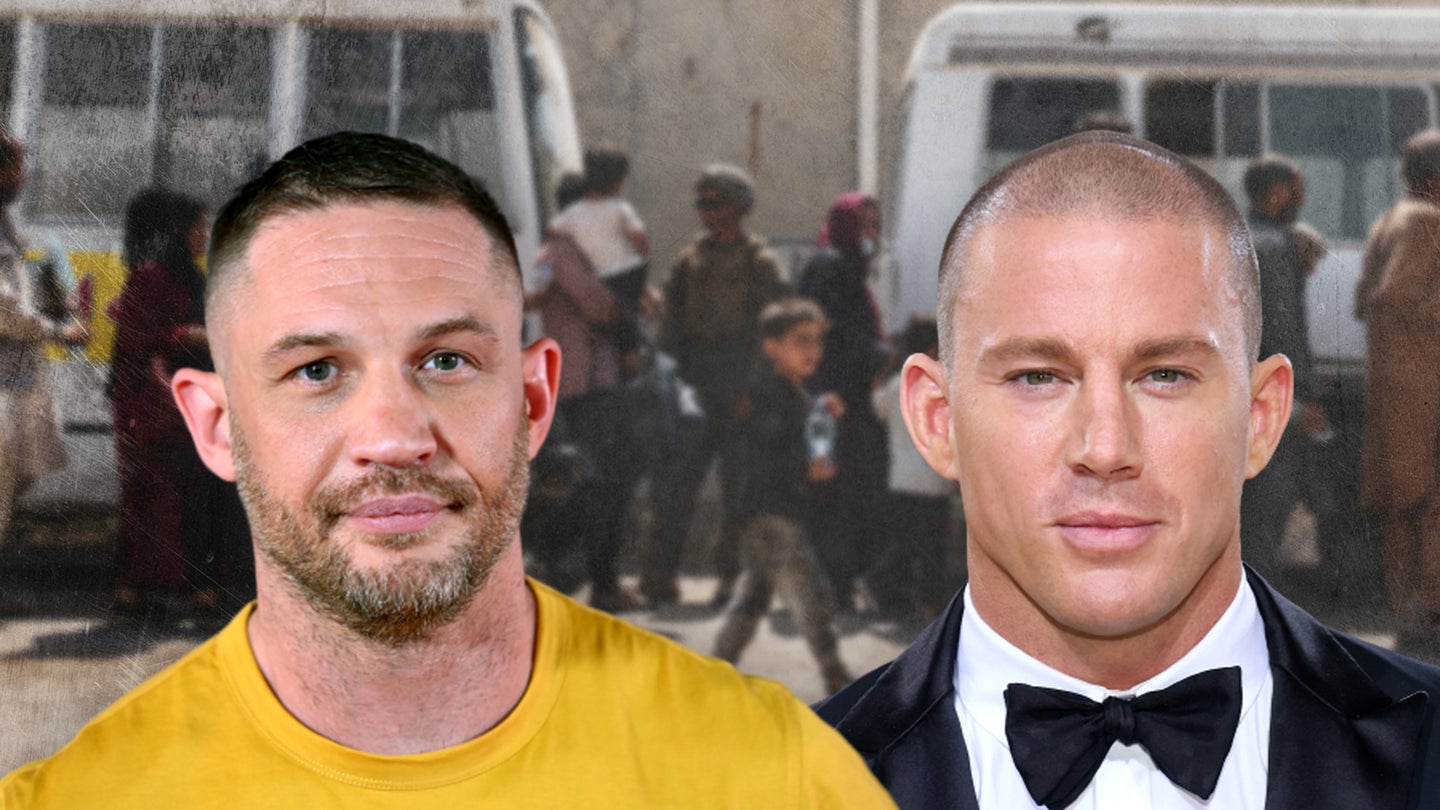 A photo composite showing actors Tom Hardy and Channing Tatum over an image of the Kabul evacuation in Afghanistan in August. Both actors have reportedly signed on for an untitled war drama about the rescue mission. (Photo of Tom Hardy by Dave J Hogan/Getty Images. Photo of Channing Tatum by Taylor Hill/WireImage. U.S. Marine Corps photo by Sgt. Isaiah Campbell).
SHARE

You know what we really need now, right at this moment, as the United States grapples with the aftermath of its 20-year war in Afghanistan, and before we even have a complete picture of everything that happened in the final days of the U.S. military’s withdrawal from the country? A movie. That’s what we need, a goddamn movie about it.

According to Deadline, actors Tom Hardy and Channing Tatum are attached to an unnamed war drama about the chaotic U.S. withdrawal from Afghanistan in which they’ll star as former special operations soldiers who return to the country to aid in the evacuation of Afghan civilians from Kabul’s besieged airport.

The pitch, by “The Bourne Ultimatum” screenwriter George Nolfi, was described by Deadline as “a ripped from the headlines fact-based drama about the Afghanistan evacuation.” While details about the project remain scarce, the U.S. withdrawal from Afghanistan has remained the focus of intensive reporting in recent months, with a major focus on the mayhem at the Hamid Karzai International Airport, the desperation of Afghan civilians fleeing the Taliban advance, the hardship endured and heroism displayed by U.S. troops, and the work of military veterans on the ground to get Afghan allies out of the country.

Some of that work — like rescuing American civilians and Afghan allies from the Taliban-controlled country — continues today, which sheds light on a potential problem with the proposed film, especially if it’s going to play up the “fact-based” angle: There’s still a lot we don’t know about what happened during the U.S. withdrawal from Afghanistan and how it felt to bear witness to the end of a generational war there.

Wars don’t just end when officials say they do — not for those who fought in them, anyway. They take years to process, and America’s longest war just came to a close. Are viewers ready for that story? More to the point, are the people needed to accurately and fully tell that story ready to talk about it so that an authentic version of events can be portrayed on screen?

These are, obviously, open-ended questions made by someone who’s watched too many “rah rah” chest-thumping post-9/11 war movies to react to another with anything short of skepticism. Though there are some notable exceptions, such as Rod Lurie’s account of the Battle of Kamdesh in The Outpost, many films that spotlight America’s recent wars seem to fall into one of two camps: They’re either thinly veiled action flicks masquerading as dramas that focus on larger-than-life special operations forces over conventional troops, or they’re cringe-inducing breathless accounts of trauma, sometimes referred to as PTSD dramas.

It’s not unreasonable to suggest that this film might be before its time, and that it may arrive before those with the perspectives needed to shape the story are able or willing to do so.

“It takes a while for people to reckon with themselves and their own memories, and their social circle,” said C.J. Chivers, an author, New York Times reporter, and Marine veteran, during a 2018 discussion on this topic. “’The Things They Carried’ by Tim O’Brien, you know, that came out in 1990, 15 years after Saigon — 15 years. We’re nowhere near that yet with Afghanistan and Iraq.”

For some additional context, it took years before those who served in Vietnam were ready to transfer their lived experiences at war to the screen, which is evident by the fact that the most critically acclaimed dramas about the conflict premiered long after it had ended. “Apocalypse Now,” “Platoon,” and “Full Metal Jacket,” came out in 1979, 1986, and 1987, respectively — years and in some cases, more than a decade after the end of the Vietnam War in 1975. In the case of “The Things They Carried,” it was 30 years after the book was published that the stories therein were greenlit as a film.

As for Hardy and Tatum’s upcoming Kabul evacuation drama, telling the full story of the tragic final days of a war defined by decades of trauma and public neglect will be a tall order. Let’s just hope that it’s no worse than The Hurt Locker.