‘Thank You For Your Service’ Is A Solid War Film, But Let It Be The Last Of Its Kind

The late French filmmaker Francois Truffaut once said, or at least he’s credited with saying, that “there’s no such thing... 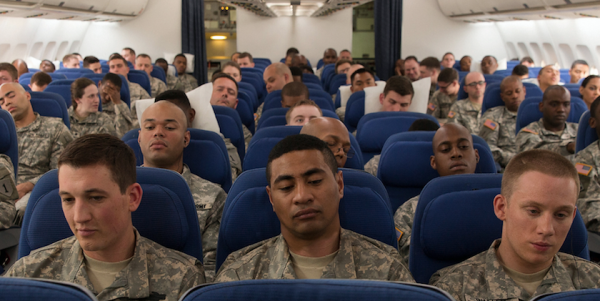 The late French filmmaker Francois Truffaut once said, or at least he’s credited with saying, that “there’s no such thing as an anti-war film.” Interpretations vary, but most take the quote to mean that movie depictions of battle, no matter how gruesome or conscientious, will inevitably glorify combat and the camaraderie forged in the trenches. I disagree. Anti-war films can and do exist, it’s just that they very rarely get made, and when they do nobody sees them. Truffaut wasn’t making a grand statement about the limitations of film as an artistic medium. It was simply a casual observation.

Indeed, the vast majority of films branded “anti-war” are not. As someone who served in the military after Sept. 11, I can attest that some of the great masterpieces of the genre — Platoon, Black Hawk Down, Full Metal Jacket— were hugely popular among the young Americans who volunteered for the wars in Iraq and Afghanistan. If the goal of those movies was to undermine the war machine, they failed. Anti-war films don’t inspire people to enlist, and they are not quoted ad nauseum in basic training. That’s rule number one.

A true anti-war film is all guts, zero glory. The 1971 cult film Johnny Got His Gun, about a soldier who returns from World War I without his arms, legs, eyes, mouth, ears, and nose might be the closest example. It’s just as boring as it sounds, which is why the film quickly faded into obscurity after flopping in theaters. A movie with no audience doesn’t influence policy or end wars. So it’s a bit of a double-edged sword. As the anti-war factor goes up, entertainment value tends to go down. Would Saving Private Ryan still have grossed $480 million in the box office had Tom Hanks been dragged off Omaha Beach covered in third-degree burns and spent the rest of the film in a hospital bed? Absolutely not. People would rather see Hanks die after he kills a bunch of Nazis.

Thank You for Your Service, which debuts in theaters nationwide on Oct. 27, is Hollywood’s latest addition to the anti-war genre, and its most earnest attempt to bring the War on Terror home. It is as haunting of a portrayal of combat-related post-traumatic stress disorder as anything that’s come before it. It is a scathing critique of the military brass and the Department of Veterans Affairs. It is, at points, very difficult to watch, and I imagine other veterans will also find some of the scenes too uncomfortably real. But it is hardly an anti-war film. It will not, as writer and director Jason Hall told Task & Purpose, “remind us that we need to elect officials who are going to only put us into honorable conflicts, and honor their word when they say we’re going to leave those place in due time.”

Adapted from David Finkel’s nonfiction book by the same name, the film stars Miles Teller as Adam Schumann, an Army infantryman who returns to his young family in Kansas after a brutal tour in Baghdad amid the 2007 troop surge. Back home, Schumann and his battle buddy, Tausolo “Solo” Aeiti (played by Beulah Koale), plunge into twin downward spirals after a member of their squad blows his brains out in front of his wife. The suicide is the first of several explosive episodes involving a veteran and his spouse. The message is clear: For a tiny fraction of the American population, the War on Terror has been a devastating family affair. Actress Haley Bennett, the daughter of a Navy veteran who plays Saskia Schumann, Schumann’s wife, provides one of the film’s most powerful performances, and that’s saying a lot. The acting is strong.

Hall earned an Oscar nomination for his screenplay adaptation of American Sniper, Clint Eastwood’s blockbuster biopic of the late Navy SEAL legend Chris Kyle. Thank You for Your Service is a dramatically different film. The Kyle depicted in American Sniper was irreproachable, a hero who killed a lot of bad people on behalf of his country and suffered the mental and physical consequences with quiet dignity. Schumann and Solo, on the other hand, are not larger than life. They are wilted versions of the men they were before they went to war. They’ve been damaged and discarded, left to rust in a bureaucratic landfill. For one VA waiting room scene, Hall rounded up 165 actual veterans to play their disgruntled selves. It’s like the ninth circle of hell.

One narrative thread follows Solo as he embarks on a junky’s quest to find MDMA after he hears rumors that it’s a miracle cure for PTSD. Making matters worse, Solo suffers from a severe traumatic brain injury sustained in an IED blast in Iraq that set another soldier ablaze. Solo couldn’t get to the man in time and watched him burn, and his memory of the man’s death plays on repeat in intense hallucinations. Schumann sees ghosts, too. And then there are the specters in the flesh: a predatory drug dealer (Omar J. Dorsey), a grieving soldier’s widow prying for answers (Amy Schumer), an estranged comrade whose paralyzing injuries Schumann blames himself for (Scott Haze), among others. We’ve seen this setup many times before, in films like Born on the Fourth of July, Hurt Locker, and Stop-Loss: War is the frying pan; home is the fire.

In our conversation, Hall was quick to point out that Thank You for Your Service is not an attempt to capture the breadth of the post-9/11 veteran experience. This is a movie about what the real-life Schumann and a few other members of his unit went through, and the war’s secondary impact on their families. However, the film draws as much from the imagination as it does from the work of nonfiction it’s based on. Some of the characters are amalgamations of the people Finkel described in his book. It is a copy of a copy of a copy. Still, I caught glimpses of my own reality throughout the film. It was clearly made with a military audience in mind, which sets it apart from the vast majority of movies about the wars in Iraq and Afghanistan — or any wars, for that matter. Though, I can already hear the complaints from my fellow vets coming, and they’re justified. This is the ultimate PTSD drama. But Hall sees it otherwise.

“I didn’t want this to be some trauma drama that everyone who served in the war is like, ‘Oh great, another movie about poor veterans that we should pity or be afraid of,’” Hall said. “I hope veterans feel represented here. I hope they take away from this that someone cared enough to get it right, and to tell their story. Not the story of the Chris Kyles of the world, the superheroes, but of the everyman working-class warrior, who sacrifices so much and who by and large feels forgotten and misunderstood. I hope they want to share this with their family and friends in an effort to have those people understand their experience a little bit better.”

The impressive level of realism in the film owes much to the fact that dozens of post-9/11 veterans were involved in the production. Additionally, Hall, the younger brother of Desert Storm veteran, made it a point to cast actors who also had personal connections to the military, and encouraged them to get to know the real-life people they were portraying in the film. “We had to push the envelope because these veterans were on set with us and were very much as part of the collaboration as Jason and I,” Bennett told Task & Purpose. “I’m so proud that they were able to be so generous and open with these experiences that are difficult to talk about.”

Teller, whose grandfather was a Marine and uncle earned a Silver Star while serving in the Army, added, “I hope veterans don’t feel this story is manipulative like Hollywood is making money off their service and that shit. We wanted to make an authentic film first and a movie going experience second.” Koele, a native of New Zealand and Hollywood newcomer, echoed that sentiment. “There’s a whole lot of blood on that uniform, I realized that the first time I put it on,” he said. “All I wanted to do is honor you guys. I don’t care what the media thinks. I’m not from America, but if I can make the veterans of this country proud that’s all that matters to me.”

While this sincere drive to do right by veterans benefits the film in a lot of ways, it ultimately prevents the story from crossing a crucial threshold. The nightmare universe that Hall has created is the perfect vehicle for a cautionary tale about the false promise of war. It is almost that, but in the end punches are pulled. Our protagonists enlisted in the Army during a time of war and suffered tremendously as a result of that decision. A true anti-war film — a movie that would, as Hall said, “remind us that we need to elect officials who are going to only put us into honorable conflicts” — would dig the knife as deep as it can go and twist it. There would be no getting back up. Instead, Thank You for Your Service ends on a hopeful note. There’s a light at the end of the tunnel. They are, after all, heroes, and heroes always triumph.

Hollywood’s infatuation with PTSD has inadvertently pushed some of the ugliest aspects of the War on Terror into the periphery. These would be things like the tens of thousands of Iraqi and Afghan civilians who have been killed by American munitions, and the military’s gross mismanagement of resources and funds, and the glaring lack of any clear long-term strategy, and the fact that many of the places where American soldiers like Schumann and Solo, like myself, fought and lost friends (and also our minds) have since been ceded to the enemy. These are the things that people no longer feel are appropriate to talk about with veterans. They have vanished from the conversation as we’ve become increasingly focused on “invisible wounds.” As ugly as it is, PTSD will never be as ugly as the visible wounds — as, say, a 19-year-old kid with no arms, legs, ears, mouth, eyes, or nose. Thank You for Your Service is a strong and in many ways necessary film, but let it be the last of its kind.

Schumann — the real-life Schumann — deployed three times to Iraq as an infantryman in the span of about four years. He told me that when he first received a copy of Finkel’s Thank You For Your Service he read the first paragraph and put it on the shelf. He never picked it back up. When I talked to him in early October, he had already seen the movie twice. He loves it.