Director Roland Emmerich has made some beloved movies about America: "The Patriot," "Independence Day" and "White House Down." He's long wanted to make a film about the Battle of Midway, and "Midway" will finally arrive in theaters on Nov. 8. 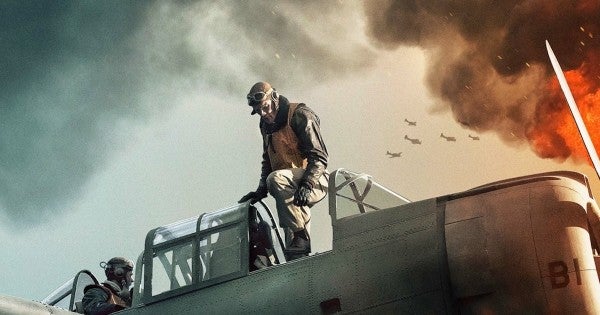 Director Roland Emmerich has made some beloved movies about America: “The Patriot,” “Independence Day” and “White House Down.” He's long wanted to make a film about the Battle of Midway, and “Midway” will finally arrive in theaters on Nov. 8.

We've got an exclusive first look at the movie's poster, and Emmerich took time to speak with us about the film from the editing room as his team races to meet deadlines.

The Battle of Midway began 77 years ago on June 4, 1942, and continued until June 7. It represented the first great American victory of the War in the Pacific after a string of bad news for U.S. forces, starting with the attack on Pearl Harbor in December 1941. Midway was the first step in a three-year campaign to win the war against Japan.

The Battle of Midway previously inspired a 1976 movie, also called “Midway,” that relied heavily on stock footage from World War II documentaries and recycled images from the 1970 war epic “Tora! Tora! Tora!” alongside an epic movie gimmick called Sensurround that introduced a bass-heavy sound system that rattled the seats in movie theaters. A cast that featured Charlton Heston, Henry Fonda, James Coburn, Glenn Ford, Hal Holbrook, Toshiro Mifune, Robert Mitchum, Cliff Robertson and Robert Wagner would have been full of movie stars 20 years earlier but, by 1976, most of the cast was too old for the roles they played.

Emmerich's 2019 movie looks to use modern technology and a big budget to recreate the battle with as much realism as possible. The Battle of Midway deserves a great movie. The cast, Emmerich's track record and his enthusiasm for this project suggests he just might deliver.

Here's our interview with Emmerich:

So, you're in the middle of editing. Is this one of your favorite or least favorite parts of making a movie? What's it like to be in the editing room? We never get to talk to anyone who is actually in the middle of doing it.

I actually like the editing room, but it's also like an extremely impatient place because everything takes too long. It's part torture, part joy. It's actually the best part when you do your first cut, where you see the movie come together.

Then it comes to testing, where people don't understand certain things, and then you have to put in lines and stuff to make it more clear. And your first cut is always too long, then you have to trim it back. That's not so enjoyable.

What inspired you to tell this story now? I guess it's been over 40 years since there was a movie about Midway.

The first time I had the idea to do Midway, it was really like 20 years ago. I had a deal at Sony, but the movie didn't come together because the studio was owned by Japanese, so they were not very inclined to do a movie where they felt like the big losers of a battle.

I always wanted to tell them that I will not show the Japanese as losers. Decision-makers started this war. The Navy did not start the war.

That movie didn't come together, and then Michael Bay and Jerry Bruckheimer did “Pearl Harbor.” I always wanted to start my movie with Pearl Harbor because you can only understand Midway when you show Pearl Harbor. “Midway” is more or less a movie about the six months in-between Pearl Harbor and the battle.

Then, I thought about our political climate right now where everybody has forgotten how wars are fought and how heroic these people were. I wanted to put a monument to these guys because it's amazing what they did and how selfless they were.

You grew up in Germany. What did you learn about the War in the Pacific growing up in school?

We like learned a little bit about it, but not very much. We learned about the American Revolution because that's a really big event. But then, when it comes to World War II, it's mainly what happened in Europe.

It was interesting for me because I wanted to do a historic film. After I couldn't do Midway in the '90s, Sony told me that they had just acquired a script called “The Patriot.” I read that and then wanted to make that movie.

It's such an important event, and there was only one movie made by an English director called “Revolution” with Al Pacino. And I knew that film,, and I didn't feel that the movie really represented what the American Revolution was really about. So, I did “The Patriot,” but I never forgot “Midway.”

I love to work with young writers, and I always ask them, “So, what is the movie you really want to write?” Four or five years ago, we met this young writer, Wes Tooke, who was writing an animated movie for us. I asked him, “So, Wes, what do you want to make, where is your heart?” He didn't even think for a second and said Midway. Wes told me that he comes from a Navy family and has this need to make a movie about the biggest naval battle America ever fought.

And I said, “Well, that's strange because 15 years ago I saw a documentary about Midway and I thought, “This would make a fantastic film.” So we hooked up and worked on it together. It took us quite a while to get a grab on the story. It's very complicated, and you always have to simplify.

Our readers are obviously always very interested in the gear. How did you recreate the ships and what are we going to see with the air battle?

Well, first of all, there's nothing left. None of these ships are in their wartime condition. Even when you have some aircraft carrier sitting around, like one in Alameda and one in, I think, South Carolina or in New York, they were altered in the '60s. The flight deck is totally different, et cetera, et cetera. And then they have actually put modern technology in some of the flak turrets.

So we knew from the very beginning we had to build everything. The biggest problem we had was that we had make this indoors because we have to shoot everything with bluescreen in order to constantly have the light to change. So that's what we did. We went to Montreal, where they have a very, very big stage, and built a flight deck or part of a flight deck.

We had to build the planes because even like some Douglas SBDs around, but they're also altered. They have to be altered because otherwise nobody would be allowed to fly them. There are no TBDs anywhere because they probably threw all these planes away because they were not such good planes.

So, we had to pretty much create everything. When you can create everything, then naturally you can be absolutely exact. Our aircraft carriers, both Japanese and Enterprise and the Hornet, what you see is super correct because there's endless research material, photographs and stuff.

I did the production design with the same gentleman who also did “The Patriot,” Kirk Petruccelli. He's very, very good in recreating historic stuff. He's very into research.

Then, really, I had to work with a lot of organizations. There's a roundtable group about Midway will all kind of people who have a lot of information who helped us to get this all right.

It's a relatively perfect re-creation of everything.

You've made “The Patriot,” obviously a very historically based patriotic movie. This is definitely going to be another, but you've also made the most patriotic science fiction movie ever with “Independence Day” and its sequel. You also directed “White House Down.” You've had a really consistent affinity for America in all these films you've made.

As a kid, I came to America twice — once I was 13½ and once when I was 14½ — for three, four months in summer as an exchange student. I got that early exposure to American life and, when I came back to Germany, I was more American. I felt more American than German. I always said to my mom, maybe in my former life I was American.

As a German, we don't grow up with comic books. So I always had to, in a weird way, invent my own movies. With “Stargate” and “Independence Day,” I had back-to-back quite successful movies.

When I did “Independence Day,” I didn't feel it was a very patriotic movie, but I guess it felt very patriotic because it was on the 4th of July with all the flags. And there's this big speech by Bill Pullman where he says, “This will be not only an American holiday, this will be now a worldwide holiday because it's about us against aliens.” So, maybe that is the reason.

For me, at that point, it was more having an African-American, a Jewish person and a whitebread American president work together as a team and save the world.

Some might say that the way you wrote it is actually the most patriotic way to approach the subject.

Yeah. I don't like really that we in our day and time still kind of are patriotic nationwide. We should all be patriotic as humans and try to figure a way out to save this planet. Right now, politically, it's America against the rest of the world. It's the Muslims against the Western World; it's the Russians against the West. It's become very, very nationalistic in the last 10 years, which I don't really like because that means that there are maybe wars on the horizon.

For me, that's also a reason why I wanted to make a movie about Midway. It's the right movie at the right time because the movie doesn't really, like, talk about politics very much. It talks about strategy, and you realize all of a sudden that mistakes were made on both sides. They're all normal human beings, and none of these people in the movie started the war. Politicians started the war.

For me, that was the interesting part about it. That's why I really tried to also be very honest about how we portrayed the Japanese. If they're not full-fledged characters — just the enemy — then I think it would be the wrong movie.

SEE ALSO: A $100 Million Remake Of 'Midway' Is Set To Start Filming Next Month