Blacksmiths, pigeoneers, crystal grinders and other seemingly archaic jobs were essential parts of the US military in WWII. 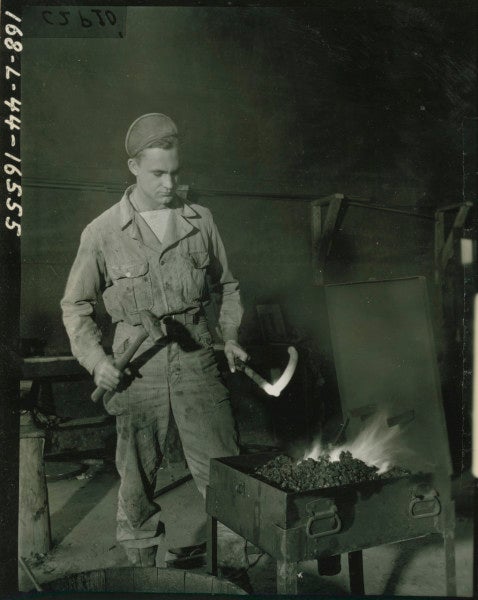 Today's military has some jobs that might surprise you — for example, did you know the Army and Marine Corps have instrument repair technicians? These troops repair musical instruments for the military bands.

But during World War II, there were a lot of jobs that would seem strange in today's technologically focused military. Over the course of the war, technological advances reduced or eliminated the need for many manual occupations. This transition is captured in the War Department's list of military jobs from 1944, where entries like ''horse artillery driver'' appear just a page away from ''remote control turret repairman.''

During World War II, blacksmiths still made many of the items needed to repair equipment and machinery. They would make metal tools and parts, by hand, in coal or coke forges. They also made shoes for some of the tens of thousands of horses and mules that saw service during the war.

Does what it says on the label: cuts meat. These troops were responsible for preparing whole carcasses, such as beef and lamb, for distribution to various units around the world.

Horsebreakers would train horses and mules so they could be issued to mounted units. They also trained them to carry packs and to be hitched to wagons and carts.

Although they weren't used in World War II to the extent they were used in the First World War, troops still relied on horses and mules to cross terrain impassable to mechanized units. For example, the 5332nd Brigade, a long range patrol group created for service in the mountains of Burma, was largely self-sufficient due to the 3,000 mules assigned to it — all shipped from the United States.

Today's military has jobs for skilled multimedia illustrators, but in World War II, military artists and animation artists created paintings, illustrations, films, charts and maps by hand. A number of successful artists served in World War II, including Bill Mauldin, who drew Willie and Joe, archetypes for infantrymen on the front line; and Bill Keane, who went on to draw Family Circus after his military service ended.

The military's animation artists were quite busy during World War II. The Army even stationed soldiers at Walt Disney's studios for the duration of the war to make patriotic films for the public and instructional or training films for service members.

During World War II, many radios still required crystals to operate, usually galena. Crystal grinders would grind and calibrate these crystals to pick up specific frequencies.

Personal radios were forbidden on the front lines, but crystal radio sets lacked external power sources, so they couldn't be detected by the enemy. For this reason, troops often improvised crystal radios from a variety of materials — including pencils and razor blades — in order to listen to music and news. These contraband radio sets were dubbed ''foxhole radios.''

Troops who worked as coopers built and repaired the wooden buckets, barrels, casks and kegs used to pack, store and ship supplies and equipment. They used hand tools to plug holes with wood and salvage damaged barrels.

Wood was used to package a wide range of goods for transport all the way through World War II, but improvements in metal and cardboard packaging technology marked the beginning of the end for wooden barrels and crates.

Military model makers were charged with creating scale models of military equipment, terrain and other objects to be used in movies, as training aids and for operational planning. The models built by these troops were used in what was perhaps one of the greatest examples of wartime deception, Operation Fortitude.

Operation Fortitude was aimed at convincing the Germans that Allied troops heading to France for the D-Day invasion would land in Pas de Calais in July, rather than Normandy in June. Dummy buildings, aircraft and landing craft were constructed by model makers and positioned near Dover, England, in a camp built for the fictitious First U.S. Army Group. The deception was so complete that Hitler held troops in reserve for two weeks after D-Day because he believed another invasion was coming via the Dover Strait.

Pigeoneers were responsible for all aspects of their birds' lives. They would breed, train and care for pigeons that were used to deliver messages. Some birds would be trained specifically for night flying, while others learned that food could be found at one location and water at another. According to the U.S. Army Communications Electronics Museum, more than 90% of the messages carried by pigeons were successfully delivered.

These troops had the sickest beats. Until the development of radar, sound ranging was one of the most effective ways to locate enemy artillery, mortars and rockets. The process was first developed in World War I, and continued to be used in combat through the Korean War.

From a forward operating post, a field artillery sound recorder would monitor an oscillograph and recorder connected to several microphones. When the sound of an enemy gun reached a microphone, the information would be recorded on sound film and the data from several microphones could be analyzed to locate the enemy gun. The technology is still in use today by many countries, which often use sound ranging in concert with radar.

Although wood was largely phased out in favor of tubular steel in aircraft construction by the time World War II started, there was still a need for airplane woodworkers to repair and maintain existing aircraft — especially gliders and some training aircraft.

Wooden gliders like the Waco CG-4A — the most widely used American troop/cargo military glider of World War II — played critical parts in the war. The CG-4A was first used in the invasion of Sicily in July 1943. They most commonly flew airborne troops into battle, most famously for the D-Day assault on France on June 6, 1944, and Operation Market Garden in September 1944. They were also used in the China-Burma-India Theater.