"The Thunderbolt was the hammer: big and strong, it could take a lot of punishment and still deliver a lethal blow." 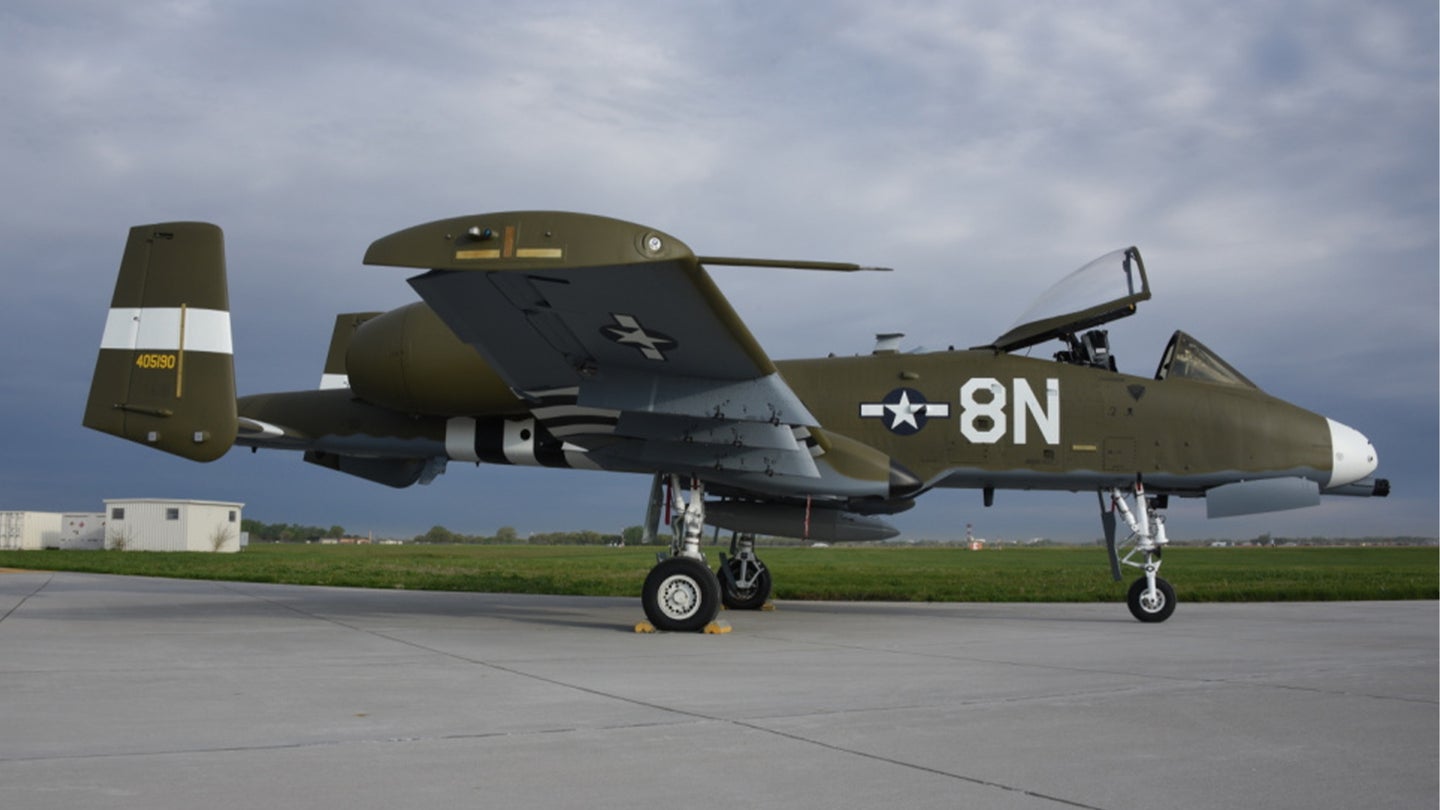 The A-10 Thunderbolt II looks good in any color, but the beloved close air support platform strutted its stuff in a cute new outfit this week when the Idaho Air National Guard’s 124th Fighter Wing showed off one of the aircraft painted in World War II heritage colors. This isn’t just some vintage outfit the 124th found on Etsy though: it’s a deeply meaningful choice that connects the wing’s current airmen with their Greatest Generation predecessors on multiple levels.

The olive drab paint scheme, D-Day invasion stripes, white nose and WWII-era Air Force roundels on the fuselage and wing are a throwback to the 124th Fighter Wing’s predecessor unit, the 405th Fighter Squadron, according to a recent press release. The 405th was deployed to western France during WWII, where it flew P-47 Thunderbolts.

The P-47 Thunderbolt shares more than just a name with the A-10 Thunderbolt II (which is also affectionately called a Warthog, or simply, Hog). Both the P-47 and the A-10 shared a ground attack role on the battlefield. Though the P-47 also served as an air-to-air fighter, the Royal Air Force adapted their P-47D to be used primarily for ground attack, much like the A-10 today.

Like the A-10, the P-47 was a tough-as-nails aircraft that could take a beating and still dish it out. Though many aviation fans cherish the P-51 Mustang as their favorite fighter of WWII, the P-47 was like the Mustang’s big older brother that you don’t want to mess with.

“It was not as famous as the P-51 Mustang, but it ranks as one of the best for that era,” Jeremy Kinney, curator and chair of the aeronautics department at the Smithsonian’s National Air and Space Museum, told Smithsonian Magazine in November. “The Thunderbolt was the hammer: big and strong, it could take a lot of punishment and still deliver a lethal blow. It was unparalleled as a ground-support aircraft and it was also a great dogfighter.”

The P-47 destroyed more than 7,000 enemy aircraft in the European theater, and it was light on its feet despite being one of the heaviest fighters of the war: flying 426 miles per hour at top speed while weighing 17,500 pounds fully loaded, Smithsonian Magazine reported.

The A-10 has a similarly rugged persona. Pilots say the Warthog is “a flying tank,” “Chewbacca with chainsaw arms,” and “a cannon with wings” that can fly full of bullet holes or with its canopy ripped off. The press release called the jet a “tank killer” because, well, it’s killed a ton of tanks over the years.

When the A-10 was first designed in the late 1960s and early 1970s, it made sense to name the jet after its kick-ass predecessor.

“Both are durable and amazing machines that were and are crucial to our country’s defense,” Kinney said.

Both aircraft were built by similar hands, too. The P-47 was built by Republic Aviation, which was later bought by the now-defunct Fairchild Aircraft, which produced the A-10 (fun side note, many early A-10s were built at the Fairchild plant in Hagerstown, Maryland, the author’s hometown).

When WWII ended in 1945, the 405th Fighter Squadron remained in service, but was renumbered the 124th Fighter Wing when it was reassigned to the National Guard. The 124th is one of dozens of Air Guard units with a similar backstory, the press release explained. The P-47 remained in service with the Air Guard through the early 1950s, where it was used as a cost-saving way to train aircrew.

Today, the old unit and the old bird lives on in the “8N” painted on the side of the A-10. The “8N” indicates the aircraft code of the 405th Fighter Squadron, which is used by air traffic control to identify aircraft, according to the International Civil Aviation Organization.

As demonstrated by the paint job, it seems thunder, like lightning, really does strike twice.