New documentary aims to tell the story of the deadliest attack at sea in the history of U.S. war 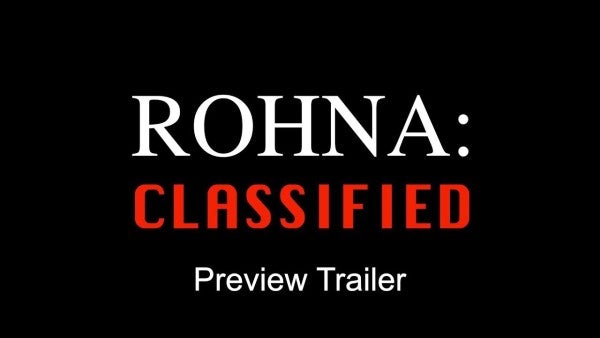 NEWPORT — The explosion and sinking of the ship in 1943 claimed at least 1,138 lives, and while the sea swallowed the bones there were people, too, who also worked to shroud the bodies.

The sinking of the H.M.T. Rohna was the greatest loss of life at sea by enemy action in the history of U.S. war, but the British Admiralty demanded silence from the survivors and the tragedy was immediately classified by the U.S. War Department.

Michael Walsh of Newport is working to bring the story of the Rohna to the surface with a documentary film, which includes interviews with some of the survivors of the attack. Walsh has interviewed about 45 men who were aboard the ship when it was hit.

“I've talked to so many of their (survivors') wives that didn't even know about it,” Walsh said.

“Rohna: Classified” focuses on some of the survivors and their stories as well as the Austrian scientist, Dr. Herbert Wagner, who invented the radio-guided missile that struck the ship and the commanding German pilot, Hans Dochtermann, who launched the missile in the attack.

On November 26, 1943, in the midst of World War II, the Rohna — a British transport ship — was en route to the Chine-Burma-India Theater to deliver troops to aid the allied war effort. A group of German bombers thwarted the journey; one bomber struck the Rohna with a rocket-propelled radio-controlled Henschel HS-293 glide bomb. Though each bomber carried two missiles, only one of those missiles struck its target; all of the other ships in the convoy were spared, Walsh said. Though eight German planes were lost.

The Rohna sunk in the Mediterranean Sea about 15 miles north of Tunisia, Walsh said, and those who didn't die in the blast died in the water.

After the tragedy the British Admiralty demanded secrecy, Walsh said. “The men were told not to talk about it…their mail was censored…so the story didn't get out.” Walsh can only guess as to why, exactly, the war-time mass casualty was barred from exposure.

What helped to bring the story of the Rohna to public attention was the work of the late John Fievet — a survivor of the attack — in the early 1990s, Walsh said. A Birmingham, Alabama, resident, Fievet was encouraged by his wife to write down his war-time stories, in order to pass them on to their children; he then submitted a story to a local Birmingham newspaper. Interest swelled and Fievet subsequently organized — with other survivors of the attack —a reunion for survivors of the attack on that convoy.

Walsh has a personal connection to the tragedy. His stepfather, Donald Dupre of Jamestown, served on the U.S.S Pioneer, a U.S. Navy minesweeper, which was a ship in the Rohna's convoy. Men on the Pioneer helped to rescue some 600 men from the Rohna blast, Walsh said. Though Dupre wasn't on the ship on the day of the attack, he had heard about it through word-of-mouth.

Walsh attended his first reunion in 2001 and has been collecting interviews and conducting research since. He met survivors at the reunions — held at various venues across the country — and filmed interviews with those men; often without special lights and microphones in Walsh's hotel rooms, prior to envisioning a documentary.

“It was my way of preserving their stories,” Walsh said. Some later interviews were conducted with higher-quality equipment.

At last year's reunion in Memphis, Tennessee, Walsh connected with documentary filmmaker Jack Ballo. Ballo serves as the co-producer, director and writer of “Rohna: Classified,” while Walsh is the film's co-producer and story consultant. They have a small team assisting them, including researchers who are working to categorize the American men — some 1,015 of them — on the casualty list by state of residence. Walsh estimated there were six casualties from Rhode Island.

Walsh said some survivors of the Rohna attack may still be alive. Many of his documentary subjects have since passed away, though, he said.

To share a story like the Rohna attack is important “to honor these men,” Walsh said. “Who have gone into the unknown fog of history…you just feel they deserve recognition.”

The documentary is still in the works, with efforts to secure funding. To donate to support the project, and to watch a trailer for the film, visit rohnaclassified.com.

SEE NEXT: A new WWII documentary chronicles the heroism of B-17 bomber crews and the horrors they endured