This is not your typical World War II documentary. 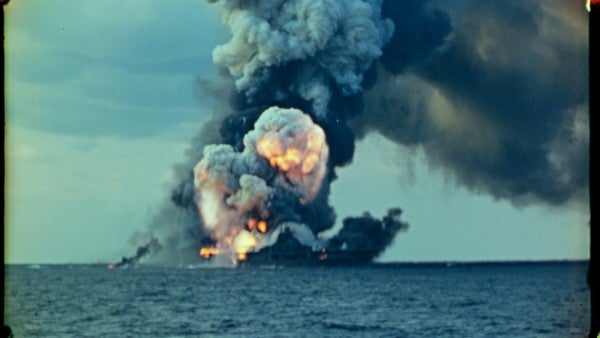 A new documentary painstakingly explores the heroism and horror of the final days of fighting during World War II.

Titled Apocalypse '45 and directed by Erik Nelson, the film focuses on the Pacific campaign and uses colorized and digitally remastered archive footage and interviews with veterans of the war to depict the final moments of the conflict, which ended with Japan's surrender on Sept. 2, 1945.

For anyone familiar with Peter Jackson's 2018 World War I documentary, They Shall Not Grow Old, the format and structure of Apocalypse '45 will sound familiar, though the effects are slightly different. Where Jackson's documentary succeeded in bringing a century-old war to life and rendered its soldiers relatable, Nelson's triumph lies in his ability to shock viewers who may feel they've learned enough of World War II — through second-hand stories, films, shows, and books — to understand just how violent it was.

Related: 'They Shall Not Grow Old' shows the essence of grunt life hasn't changed much since WWI

The film begins with a poem recited by Ittsei Nakagawa, a Hiroshima survivor who was 15-years-old when the “Little Boy” atomic bomb was dropped on Japan. As the screen fades to black, explosions and screams can be heard, as it quickly cuts to shots of U.S. troops in Hawaii celebrating the end of the war — in an instant, what felt like cries of abject terror are replaced with the cheers of elated sailors and Marines, home after a long and brutal war.

The sequence sets a brooding and introspective tone that persists for the entirety of the hour and 45-minute-long documentary. From the outset, the message is clear: This will not be a sanitized look at World War II.

Throughout the film, we're presented with never-before-seen moments: Kamikaze planes crashing into U.S. Navy ships; brutal assaults on Okinawa and Iwo Jima; and footage of Nagasaki and Hiroshima, still burning from the atomic bombings. These scenes, tough to watch as they are, muddy the waters and complicate an all-too-common narrative surrounding the Second World War: That because it was a necessary war, it was somehow less brutal.

And if heroic moments of triumph are shown, like the flag-raising on Iwo Jima, then so too is the cost: Footage of the maimed; burials for the dead; Marines scrambling for cover or advancing on an objective; and gouts from flamethrowers torching an already ashen wasteland. Following the iconic scene atop Mount Suribachi, the fighting continued for a further four weeks. In the end, nearly 7,000 U.S. Marines died, and another 20,000 were wounded. Of the island's 18,000 Japanese defenders all but 216 were killed.

Once just statistics on a page, Apocalypse '45 makes the cost, and the incredible sacrifices made there, impossible to ignore.

“World War II never really ended. It made our modern world, and we are still defined as a nation by its consequences,” said Nelson, the film's director, in a statement provided to Task & Purpose. “In Apocalypse '45, I wanted to present the last, most brutal year of this war as it actually was, in the raw words and rawer images from the time. As the last men who fought in that war — the men who literally saved the world — leave us, I felt it was vital that their voices be heard one last time.”

Apocalypse '45 was pulled together from more than 700 reels of footage from the National Archives, which were then laboriously digitally restored, frame by frame, to 4K resolution.

The film's only narration comes from conversations with 24 men who lived through the hellish last days of the war, many of whom were in their 90's at the time they were interviewed, with the oldest being Thomas Vaucher, a 101-year-old former B-29 pilot.

Their words, some spoken through sobs, are as hard to hear as some of the scenes on screen are to watch — but just as necessary.

“It took forever and a day to get off the beach,” says one of the veterans who served on Iwo Jima. “I kind of blocked all of that out of my memory. A lot of boys were praying; 18, 19 year-olds, they were calling for their mother.”

Another: “Pulling the bodies out of the water, and the body parts, that was the first shock I had.”

“All we wanted to do was leave there alive,” said a third. “There was no big esoteric reason why we were there. We just wanted to be alive that's all — stay alive.”

Nelson previously directed The Cold Blue, a World War II documentary that focused on the Eighth Air Force as they waged war over Europe, suffering horrendous casualties during dangerous daylight bombing runs. The Eighth Air Force accounted for nearly half of the U.S. Army Air Force's casualties — roughly 47,480 out of 115,330 — and included more than 26,000 dead.

Like The Cold Blue, Nelson's latest venture is as much a meditation on death and fear as it as a tribute to those who endured the horrors of that war, fighting through to its bitter end.

The film is available for virtual screening through select theaters until Aug. 27 — a full list of locations can be found here — before becoming available on Discovery Channel on Sept. 2, the 75th anniversary of the war's end.

Related: A new WWII documentary chronicles the heroism of B-17 bomber crews and the horrors they endured