A battle-scarred American flag believed to be the first planted on Omaha beach during the 1944 D-Day landings is expected to fetch more than $55,000 at auction next week, 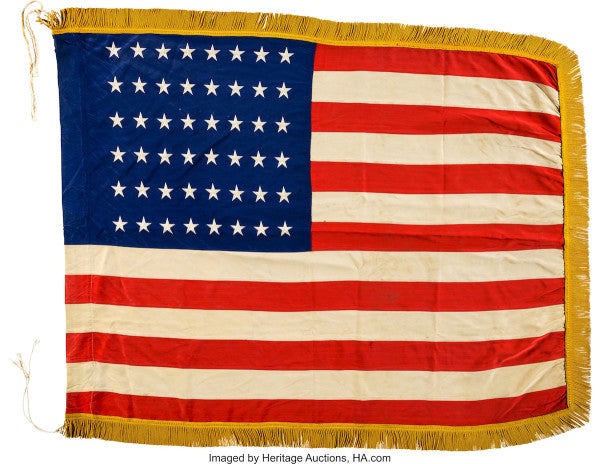 LOS ANGELES, (Reuters) – A battle-scarred American flag believed to be the first planted on Omaha beach during the 1944 D-Day landings is expected to fetch more than $55,000 at auction next week, Heritage Auctions said on Monday.

The flag, with a distinctive gold fringe and a repair from an apparent bullet hole, was planted by a U.S. army engineer on Omaha Beach, the scene of some of the bloodiest battles when Allied forces stormed the Normandy coast of France in World War II.

The Dallas auction house said the flag was planted by Columbus, Ohio bartender turned army engineer John Horvath, who later sent the flag to his wife with a letter.

“Take care of the flag. It's the first which went up on the beachhead, two hours after the invasion started. I had to use my tent pole to raise it,” Horvath wrote in the letter to his wife.

The letter and the flag's arrival in Columbus were chronicled in a 1944 newspaper clipping with the headline “First Flag on Beachhead in Normandy Arrives Here as Souvenir of Battle.” The clipping, which shows Horvath's wife posing with the flag, is believed to be from the Columbus Citizen-Journal in August 1944 and is being sold along with the flag, Heritage said.

Horvath died of a stroke in either 1961 or 1962 and left the flag and other war medals and mementoes to his nephew. The flag is being sold by a private collector.

The flag will be auctioned on June 9, along with Horvath's Purple Heart and other medals. Online bidding is already underway and by Monday had reached $55,000 – above the pre-sale estimate of $50,000.

Flags have become prized items among military collectors. The U.S. flag that flew from the boat that led the first American troops onto Utah Beach during the D-Day landings sold for $514,000 at a Heritage Auction in 2016 – more than five times its estimate.

SEE ALSO: What Americans Should Consider On D-Day's Anniversary, From A Man Who Knows

WATCH NEXT: How 'Live. Die. Repeat' Captures The Future Of Amphibious Assault