General Dwight D. Eisenhower's face was grim but composed as he read a short message to the assembled group of... 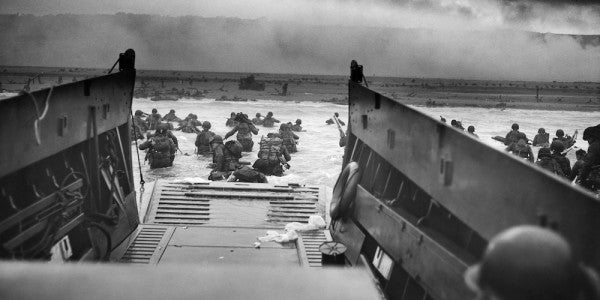 General Dwight D. Eisenhower's face was grim but composed as he read a short message to the assembled group of reporters on the morning of June 7, 1944.

“Our landings in the Cherbourg-Havre area have failed to gain a satisfactory foothold and I have withdrawn the troops. My decision to attack at this time and place was based upon the best information available. The troops, the air and the navy did all that bravery and devotion to duty could do. If any blame or fault attaches to the attempt, it is mine alone.”

Eisenhower never actually uttered these words. But he did scribble them down in the tense days before the Normandy invasion. Despite the years of planning for D-Day, and the awesome armada of men, ships and planes that he commanded, Eisenhower knew how risky it was to storm ashore into the heart of Hitler's Atlantic Wall.

With more than seventy years of hindsight, it is easy to assume that by June 1944, the Third Reich was doomed. Russian armies were relentlessly advancing from the East; Anglo-American armies were invading from the West, while German cities and factories burned under around-the-clock attacks by American and British bombers.

But those who fought the Germans knew better than to underestimate them.

As Eisenhower contemplated the assault on Hitler's Fortress Europe in the hours before D-Day, he knew how dangerous the operation was.

D-Day was a success. But here are five ways that D-Day could have ended in disaster:

Troops of the US Army 2nd Infantry Division march up the bluff at the E-1 draw in the Easy Red sector of Omaha Beach, Normandy, France on D+1, June 7, 1944. They are going past the German bunker, Widerstandsnest 65 (WN 65), that defended the route up the Ruquet Valley to Saint-Laurent-sur-Mer.

1. The Germans could have learned the location of the invasion

By early 1944, everyone knew the invasion would soon be coming. British civilians knew, as they watched their island practically sink under the weight of division after division of American troops. Hitler also knew, which is why he transferred his elite panzer divisions from the Eastern Front to the West.

The big question wasn't if the Allies would come, but where. Control of the seas gave the Allies immense flexibility in picking an invasion site, which meant the Germans had to be prepared for landings anywhere from France, to Belgium, to the Netherlands (Hitler was even convinced there would be a landing in Norway).

Nonetheless, the Germans could make some educated guesses. The ideal invasion site would be within range of fighter cover from English airfields. It would also be as close as possible to ports in southern England, to minimize sailing time for invasion convoys.

The Normandy peninsula was a possibility. But the obvious candidate was the Pas-de-Calais region, just twenty miles across the English Channel from the cliffs of Dover. The Germans kept many of their troops around Calais, and the Allies happily encouraged them to do so. They even created a fake army—commanded by George Patton—that appeared poised for a Calais invasion. The result was that the Germans maintained substantial forces in Pas-de-Calais for months, convinced that Normandy was just a decoy landing. Meanwhile, their armies in Normandy were relentlessly chewed up until the Allies achieved a breakthrough in August that took them all the way to Germany.

It could have turned out differently. Perhaps the Germans might have guessed that Normandy was the real invasion site. Perhaps a German spy in England had managed to penetrate Allied security. A careless word, a stolen document…there were so many ways that the secret of D-Day might have been compromised.

Whatever the reason, the result would have been catastrophic. German defenses would have been strengthened; every beach would have become a kill zone like Omaha Beach, where the first waves of U.S. soldiers were almost wiped out.

But the death blow to D-Day would have been the panzer divisions massing in Normandy to drive the invaders into the sea. At the least, substantial reinforcements would have been transferred from Pas-de-Calais to Normandy, which would have delayed the Allied breakout. Instead of celebrating New Year's Eve 1944 on the German border, the Allies armies might have spending it on an overcrowded beachhead in France.

LST-310 (2nd LST from the right) along with other ships putting cargo ashore on one of the invasion beaches, at low tide during the first days of the Invasion of Normandy in June 1944. Among identifiable ships present are LST-532 (in the center of the view); LST-262 (3rd LST from right); LST-533 (partially visible at far right); and LST-524. Note the barrage balloons overhead and Army “half-track” convoy forming up on the beach.

Even if the Allies managed to breach the German pillboxes and minefields on the invasion beaches, the danger was only just beginning. The most vulnerable time for an amphibious invasion is just after the landing, when the shallow beachhead lacks defensive depth, and the invaders haven't had time to bring ashore armor and artillery. If the Germans had been able to quickly launch a massed counterattack at Normandy with their panzer divisions, Eisenhower might have been forced to read his somber speech.

Yet it wasn't that simple. The Germans didn't know where the invasion would come. They had ten panzer divisions in France and the Netherlands. But where to place them? Hitler and his generals couldn't make up their minds. On one side, were the commanders of Panzer Group West, the central armored reserve in France, who urged that the tanks be massed in a central position near Paris, from where they could respond with a concentrated blow to any Allied landing. That was the way it was done in Russia, where the panzers functioned as a “fire brigade,” moving up and down the front to defeat Soviet offensives.

But in Russia, the Soviet air force had been a mere nuisance. Field Marshal Erwin Rommel, who commanded Army Group B defending France, had spent two years battling the British and Americans in North Africa. He had learned the hard way how difficult it was for mechanized troops and their supply convoys to operate when Allied aircraft blasted roads and rail lines. Rommel argued that Germany would only have forty-eight hours to crush an Allied invasion before the beachhead became too strong, which meant the panzers had to be positioned close to the invasion site.

Hitler may have posed as an iron-willed dictator, but he was often surprisingly indecisive. When it came to panzer placement, he split the various armored divisions between Rommel, Panzer Group West and a third reserve under Hitler's personal control. Most of them could not even move without the Fuhrer's personal approval. In the crucial early hours of D-Day, when German commanders begged for permission to activate the panzers, they were told that Hitler was sleeping. Only a single division, the 21st Panzer, was in position to counterattack the beachhead the first day. Even then, it managed to penetrate all the way to the water's edge.

What if 21st Panzer had been joined by three or four more tank divisions? The Allies would have had naval gunfire support; a shell from a battleship's big guns could flip a 60-ton German Tiger tank upside down. But they would have lacked tanks and antitank guns, their forces would have been disorganized from the landings, and they would have had no time to fortify their positions.

Panzer Group West's idea of a central panzer reserve sounded good in theory, yet Allied aerial interdiction would have rendered a long-distance counterattack difficult. However, if Rommel had been given control of ten panzer divisions, and he had been able to station some close to Normandy and ready to move at an hour's notice (or if Hitler had awakened early on June 6 and permitted them to move), then history might have turned out differently.

Eisenhower's most dangerous enemy wasn't Hitler. It was Mother Nature.

A major amphibious landing in stormy weather, when waves would swamp landing craft, was out of the question. Indeed, D-Day was supposed to happen on June 5, but bad weather forced Eisenhower to postpone it a day. His meteorologists correctly predicted that there would be a dry spell on June 6 (their German counterparts didn't, which is why the landings achieved tactical surprise).

But—and not that this ever happens in real life, of course—what if Eisenhower's weathermen had made a wrong forecast? What if storms had pummeled the invasion beaches during or soon after the landings? The effects of this scenario could be seen on June 19, when a fierce storm wrecked numerous landing craft and several “Mulberry” artificial harbors, delaying badly needed Allied reinforcements and supplies. And this was two weeks after the landings. If the storm had struck during the landings, the results would have been catastrophic.

Allied airpower was the decisive ingredient in the success of D-Day. In theory, the Germans should have been able to reinforce their armies faster than the Allies. It should have been easy for them to pour in reinforcements by road and rail, while the Allies, who lacked a major port, had to laboriously ship in supplies over the invasion beaches.

Yet it was the Allies who won the battle of the buildup. German troops could not travel on roads by day for fear of being strafed by omnipresent Allied fighters. The French rail network had been shattered by months of Allied bombing. German reinforcements that should have taken days to reach the front took weeks.

All this happened because the German air force was a spent force. Its best pilots were dead, its propeller-driven fighters increasingly obsolescent and short of fuel, and its fighter strength worn down attempting to stop the American strategic bombers and their Mustang and Thunderbolt escorts.

But Germany had a “wonder weapon.” The Me-262 jet fighter flew 150 miles faster than propeller-driven Mustangs and Spitfires. It didn't effectively enter the war until late 1944, a victim of teething troubles and Hitler's insistence in 1943 that it should be built as a jet bomber.

But what if Hitler hadn't meddled, or a crash development program had enabled jet fighters to fly in significant numbers on D-Day? The Luftwaffe's bomber fleet was a skeleton force by the summer of 1944, so the invasion probably wouldn't have been disrupted by bombing. But large numbers of Me-262s might have driven Allied bombers from the sky, enabling the panzer divisions to operate in daylight with impunity.

One of the most intriguing mysteries of World War II is why Germany and the Allies did not use chemical and biological weapons against each other. As the Third Reich crumbled, it seemed ever more likely that Hitler would employ weapons of mass destruction.

The reason he didn't was deterrence. Both sides feared that, as in World War I, once one side used chemical weapons, so would their opponents. It turned out that German nerve gases like sarin were far more effective than Allied chemical weapons, such as mustard gas, but the Germans didn't know that.

Allied retaliation would have come swiftly (Britain and America had produced large quantities of anthrax bombs to drop on Germany), but the immediate question is the impact of nerve gas on an amphibious landing. Landing on a fortified beach was difficult enough. Doing this while wearing a gas mask would have been a nightmare.