A 33-year-old French historian has been sentenced to a year in prison for stealing hundreds of dog tags belonging to U.S.... 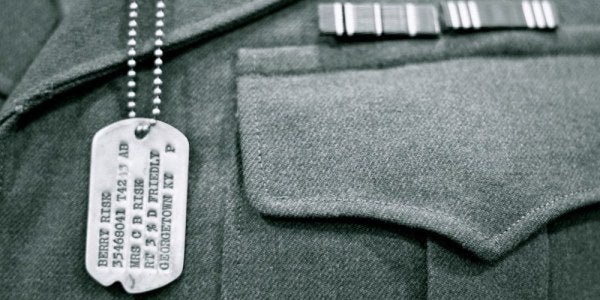 A 33-year-old French historian has been sentenced to a year in prison for stealing hundreds of dog tags belonging to U.S. service members killed during World War II from the National Archives in College Park, Maryland, with the intent of selling them on Ebay.

Antonin DeHays initially pled guilty in January to stealing more than 290 dog tags and 134 records that included “personal letters, photographs and small pieces of U.S. aircraft downed during the war” while visiting National Archives between December 2010 and June 2017, according to the U.S. Attorney’s Office for the District of Maryland.

DeHays, a historian apparently known for his focus on the Allied landing at Normandy Beach in France on D-Day, was ostensibly visiting to review documents regarding American aviators shot down over Nazi-occupied Europe. But his thieving behavior doesn’t capture the respectful and dignified character of a historian — or, you know, a decent human being. From the Department of Justice (emphasis ours):

DeHays visited the National Archives at College Park and stole two dog tags, one silver and one brass, issued to a downed Tuskegee Airman, who died when his fighter plane crashed in Germany on September 22, 1944. DeHays gave the brass dog tag to a military aviation museum in exchange for the opportunity to sit inside a Spitfire airplane. On a different occasion, DeHays stole two dog tags that were linked together with a wire loop.  One of the dog tags was issued to a U.S. serviceman who served in World War II, and the other dog tag was issued to his father, who had served in World WarI.

After his theft came to light in 2017, DeHays acknowledged that he’d pilfered the artifacts of American war heroes in order to turn a quick buck on Ebay. The stolen dog tags “bore evidence of damage, such as dents and charring due to fire sustained during crashes of Allied aircraft that were shot down,” features that federal investigators say DeHays played up when communicating with potential buyers (emphasis ours, again):

Although DeHays kept some of the stolen U.S. dog tags and other stolen records for himself and gave others as gifts, he sold the majority of the stolen items on eBay and elsewhere. Before selling the dog tags, DeHays sometimes removed from the dog tags markings made in pencil which could have been used to identify the dog tags as having been stolen from the National Archives.

In addition to his prison time, DeHays will have to pay $43,000 in restitution to the National Archives and Records Administration, but given the callousness of his offense, it’s hard to believe that the punishment fits the crime here.

“The theft of our history should anger any citizen,” Archivist of the United States David Ferriero told the Washington Post after news of DeHays’ alleged crimes came to light, “but as a veteran I am shocked at allegations that a historian would show such disregard for records and artifacts documenting those captured or killed in World War II.”