Welcome to the first, and hopefully final, installment of “No, drones can't fucking do that.” Today, the impossible problem set... 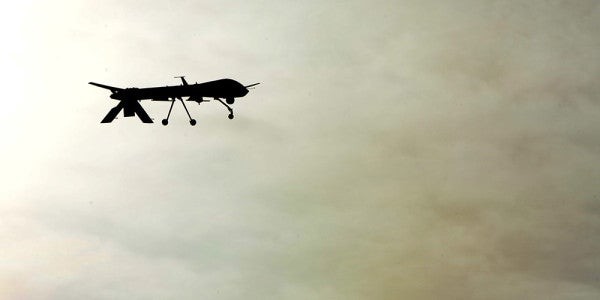 Welcome to the first, and hopefully final, installment of “No, drones can't fucking do that.”

Today, the impossible problem set out for uncrewed aerial vehicles is “stopping nuclear war, but after the missiles are launched.” This is not the fever dream of an InfoWars comment section; this is the opinion of two columnists published last Sunday in the Wall Street Journal. (Neither is a drone expert or has military experience; one is
a historian at a pro-defense contractor think tank; the other is a philosopher who writes about intelligent design.)

“
Drones Can Protect Us From Kim's Missiles,” the headline reads, somehow without a gigantic glowing footnote that screams “Someday, maybe, if the laws of physics agree, and the research pans out, and North Korea never figures out an effective countermeasure.”

The op-ed plows through its points with the speed and intensity of a fundraising email. No drone currently in the Pentagon's arsenal can save us from nuclear devastation, the authors lament. But! If Congress moves
now to respond to the North Korean threat, then lawmakers could fast-track funding for “an innovative but inexpensive missile-defense system that can neutralize North Korean missiles using high-altitude drones.”

You can fast-track funding, but you can't guarantee a sudden technological miracle. Can drones be missile defense? The short answer is “No.” The long answer, after inevitably spending several billions on testing and development, is “Almost certainly not.”

Physics: not just a good idea, but the law

Every missile defense program is vexed by the same three problems: the immutable laws of physics and the slightly more mutable laws of offense-defense theory and supply and demand.

Of these problems, physics is the simplest, and it's not very simple: Most missile defense systems, like the
ground-based midcourse defense system presently deployed on the United States' west coast, essentially boil down to hitting a falling bullet with a rising bullet. Track the missile's launch; launch an interceptor; hope the engines adjust in time and the the missile travels as expected, without any deviation or decoys; and maybe, just maybe, an interceptor can crash into the missile it's supposed to stop as it's falling toward its target. (There has yet to be a successful test in realistic conditions.)

Drones, though, would skip the whole ballistic-trajectory interception business, according the WSJ op-ed. Instead, the authors write, all you have to do is “deploy remotely piloted drones to target missiles early in flight while the missile booster engines are firing,” when they're
theoretically easier to track and attack.

You're gonna have to invent some new missiles or lasers, too

That's a tiny window of time to meet a rocket heading up toward the edge of earth's atmosphere. To target North Korean missiles this way, the U.S. would essentially need drones —
many drones — airborne at all times, watching a country roughly the size of Virginia, for any launch preparations. The WSJ authors propose continuous 20-hour flights, 45,000 feet over the Sea of Japan, as a way to do this. Then the drones (how many? The authors never say) will launch “new high-speed missile interceptors” to stop the missiles. (This means the drone program is also a missile defense program and a new missile program, a turducken of contracts to toss at the defense industry.)

There are specific hard limits for how missiles launched from drones could even do the interception. Tracking threats by radar requires the
drones to be close in, likely closer than the 45,000 feet stated in the op-ed. Tracking rocket launches by heat plumes requires drones to be closer still. As journalist Gerry Doyle notes, “assuming North Korean missiles could be fueled out of sight, then wheeled out and launched, there wouldn't be much time to fly a drone within range. That means drones would have to be persistently loitering inside DPRK airspace.”

Okay, sounds dicey, but once you have the tracking problems solved, everything's gravy WSJ's sales pitch argues: Later, once this drone program is in development, it can use
lasers instead of missiles — despite the fact that present defensive laser technology is both too large to fit on a drone and too slow to meaningfully stop anything flying faster than a mortar round.

In order for any of this to work, the drones have to not be shot down first.

Years of operations over Afghanistan and Iraq give Americans the impression that any drone can fly in any sky with relative impunity. Which is largely true, when you have an Air Force to secure the skies. But the strengths of Reapers — slow, persistent speed, long endurance, and downward-facing surveillance cameras to watch a narrow slice of ground — are all useless against any meaningful anti-air defenses of any kind.

Using stealth technology can help to a point, though stealthy drones lose many of the cost-saving efficiencies that come with the existing drone fleet. The most likely candidate for such a mission would be modifying an existing RQ-170 Sentinel stealth drone. There isn't much official information on the craft, but here are three salient points: it is
presently listed as unarmed, so that would take some adaptation. Less than two dozen are known to exist, so continuous patrols would require the construction and operation of many more drones. And almost a decade ago, Iran caught and dismantled one. Adapting or building a new stealth drone for continuous surveillance strikes on North Korean missiles is theoretically possible, but it's a steep hurdle.

Plus, no matter how stealthy the drone is, it is still a physical object that can be observed in the sky. Persistent patrols lend themselves to observation from the ground; regularly flying the same drones in the same place, to watch for the same thing, means North Korea will have ample opportunity to study the drones from the ground and figure out a way to either disable them or launch missiles where the drones won't pose a threat. It's not like the drones can be scrambled from a nearby airfield to do the interception; in order for any of this premise to work,
there have to be drones in the sky at all times.

Stop assuming your adversary is an idiot

Even assuming any of this comes to fruition — that RQ-170s are easy to arm, that the drones can stay in the sky for as long as they need to, that North Korea won't find an anti-aircraft weapon to disable the drones, that the drone missiles (or future drone lasers) can intercept and destroy their targets in the limited windows they'd need to — even assuming all of that, this premise further assumes North Korea won't simply adapt.

The simplest way to counter a missile defense system is by launching more missiles. And while nuclear missiles are not cheap, building another nuclear weapon is often cheaper than building and maintaining a system to counter it. If the drone-based missile defense can stop one launch, it makes sense that North Korea would respond by launching more missiles at once.

It's a paradox at the heart of missile defense: Any attempt to stop an existing threat encourages rivals to simply build more threats to overwhelm the defenses.

Beyond increased arsenals, North Korea could develop countermeasures — perhaps hardened engines that lasers can't burn through easily, or maybe rocket stages that eject chaff or flares to distract missiles. Hardened, underground launch silos in the interior of the country would operate out of the reach of drones and hardly reduce the range of the ICBMs. Regular fighter patrols off the coast could scramble drone patrols, even if they had to rely on
legacy jets.

If the fighter patrols are countered by American craft protecting the drones, there's a chance that the shooting war starts then and there, and the whole apocalypse drones are supposed to prevent begins with the drones under attack.

Great for contractors, though!

If this planned defense project did not already scream boondoggle, WSJ's authors peg the cost — for an 18-month turnaround on a new airframe, new missile, and whole new drone mission — at just $100 million, or roughly the purchase price of a single F-35A.

And then, killing irony, the op-ed urges Congress to pass funding for a new missile defense system on the anniversary of President Reagan's speech announcing the Strategic Defense Initiative — an almost fantastical missile defense program premised on developing new technologies to stop missiles, including missile defense weapons mounted on satellites in orbit.

Better known as “Star Wars”, the Strategic Defense Initiative burned through the equivalent of $96 billion in 2018 dollars by 1996, before being renamed twice and having its more elaborate plans shelved indefinitely. It lives on today as the Missile Defense Agency, which last May demonstrated it could intercept a dummy target in space under more-than-ideal conditions — for a
whopping $244 million. (Yes, we literally shot a quarter of a billion dollars into space and watched it blow up.) It is likely that testing a drone-based boost phase interceptor, complete with new missile (and without even accounting for likely countermeasures), could cost millions for every individual test.

Anti-missile drones, as proposed by the WSJ's columnists — who, again, are a Churchill biographer and an anti-evolution philosopher — are weapons with a singular use, which tweaks at the margins of an already-nightmarish scenario. Pretending they are the answer to a North Korean threat ignores North Korea's ability to simply try new, different, and more threats instead. Even the most successful drone-intercept execution would have negligible effects in a first-strike situation — and would more likely be destabilizing by its very existence.

If Congress wants to act fast to reduce threats on the Korean peninsula, it should urge the president to appoint an ambassador to South Korea instead.

Kelsey Atherton is a defense technology writer based in Albuquerque, New Mexico. His work has appeared in Popular Science, Aviation Week, Politico, and elsewhere. When not writing about the robots of future wars, he spends his time online arguing the semantics of what is and isn't a drone.