‘The end of the war is an anti-climax’ — A reporter’s notes on VE-Day, 75 years later

"It ended at different times for different soldiers. It ended when the Germans in front of them gave up.” 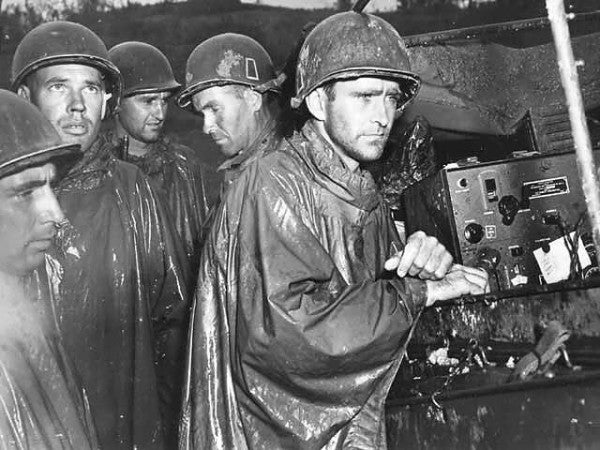 A day after World War II ended on May 8, 1945, Lee McCardell, a seasoned Baltimore Sun war correspondent, speculated in a front page piece: “How Long After the Shooting Stops Does A War Really End?”

McCardell’s wartime odyssey began early in 1942 when he joined the 29th Division, made up of National Guardsmen from Maryland, Virginia and Pennsylvania, who were training in England and Scotland for the eventual invasion of Northern Europe.

His first combat experience came on Feb. 2, 1944, at Cassino in Italy, as he observed the German attack on the historic 18th century Benedictine monastery from a hillside.

“It looked and sounded like the end of the world. I was fascinated,” he wrote. “Toward the end, when the Germans began to lob air bursts over the face of my hill, I was scared silly.”

Later attached to the 9th Air Force, he was one of four correspondents who covered the D-Day landings on June 6, 1944, from the air, and later was on the ground to witness and report on the 29th’s breakout at Saint-Lô. McCardell barely escaped death when Bebe Irvin, an Associated Press correspondent who was by his side, was killed instantly by a bomb fragment.

He chronicled the liberation of Paris by American forces and the French 2nd Armored Division on Aug. 25, 1944. It had been four years and 73 days since the French tricolor had flown over the City of Light.

“Tears are running down many a Parisians’ cheek,” he wrote. “Tears ran down mine once or twice, so genuine and unrestrained was the city’s greeting,” he observed.

'The horror of mass murder'

Assigned to Gen. George S. Patton’s 3rd Army, McCardell was with them when they reached a concentration camp on the outskirts of Ohrdruf, Germany, in April of 1945.

“There on the blood-soaked ground before you lay the bodies of 31 miserable men. Each had a bullet hole in the back of his head. They had been shot three days ago by SS Guards, you were told,” he wrote. “You heard of such things in Germany. You had heard creditable witnesses describe such scenes. But now you were actually confronted with the horror of mass murder, you stared at the bodies and almost doubted your own eyes.”

Three days later, the 6th Armored Division liberated Buchenwald, where 44,000 had perished and whose remaining 21,000 inmates were barely alive.

“Perhaps Americans are tired of reading these atrocity stories. God knows we correspondents are sick of writing them,” he wrote. “We are sick of seeing these people, sick of listening to their tales. But they belong to the Nazi wreckage, laid bare by the ebbing tide of war on the battlefront. And the tide is still running out.”

World War II, which raged for five years, eight months and six days since the Germans invaded Poland, ended on May 8, 1945, in a schoolhouse in Reims, France.

McCardell was in Bavaria with 3rd Army when German forces surrendered unconditionally to the Western Allies and Russia at Gen. Dwight D. Eisenhower’s headquarters.

'The end of the war is an anti-climax.'

“The end of the war is an anti-climax. The shooting ceased at 8 o’clock yesterday morning. Unofficially, it ended days ago,” he wrote in his piece that was published May 9. “It ended different times for different soldiers. It ended when the Germans in front of them gave up.”

McCardell’s mind roamed back to Baltimore, and the wife and three daughters who lived on Wilmslow Road in Roland Park, whom he had not seen in three long years, years that were defined by death, destroyed cities and villages, and man’s inhumanity to man.

“And I thought of Maryland, with a summer moving across it gently, and of a letter which arrived last night from home, a letter in which someone I love very much had written: “'I leaned out of our front window this morning. The rosebushes are filled with buds. Do you really think you’ll be home in time to smell them?'”

He reflected on the cruel lessons of war.

“They were the dead whose graves belonged to the sandy wastes of North Africa, the olive groves of Italy, the hedgerows of Normandy and the hills of the Ardennes. Men, who, in some mathematical calculations of the infinite, were killed in battle in order that we, the lucky ones, might survive.”