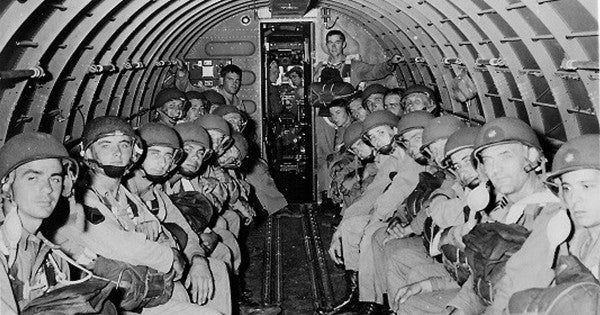 A new documentary film tells the little-known story of the small group of men and women during World War II who went deep behind enemy lines to gather intelligence and organize resistance to the Nazis before the D-Day landings, which kicked off 76 years ago today.

“This powerful film tells the story of allied special forces whose daring exploits changed the course of World War II and helped save the world from tyranny,” says Leon Panetta, former defense secretary and director of the Central Intelligence Agency, in the film's opening. “Their courage and sacrifice deserve our eternal gratitude.”

Produced by the nonprofit OSS Society, the film Operation Overlord: OSS and the Battle for France profiles the few who snuck into France and helped resistance fighters organize, train, and better fight back against their Nazi occupiers. They were members of the Office of Strategic Services, the wartime intelligence agency that preceded the CIA.

Though the French resistance had been fighting back against the Nazis for more than a year, according to the film, members of the OSS and their British counterparts worked together to recruit, train, and equip French-speaking commandos to carry out a “shadow war” of coordinating supply drops for friendly forces, gathering intelligence, and attacking and sabotaging the enemy.

Many were formed into what were called “Jedburgh teams” of two to four men. According to a historical account from the CIA, more than 90 of the teams parachuted into France in 1944, linking up with local resistance groups and providing a crucial link back to the allied command.

While many Americans know the story of D-Day on June 6, 1944, when more than 150,000 American, British, and Canadian troops landed on French beaches and began their effort to free the country from German occupation, OSS commandos worked ahead of them, in the shadows, to ensure their success.

Six months before the invasion, according to the film, the OSS and the resistance were responsible for the sabotage of more than 100 factories and the destruction of more than 1000 locomotives, which brought German industry to a halt.

“Been playing games with Boche patrols,” radioed one OSS lieutenant, using a derogotary term for German soldiers. “It's fun.”

They also photographed coastal defenses, analyzed the terrain, and mapped safe zones. And during the invasion, the OSS sent misinformation that the D-Day invasion was just a feint, confusing the Germans into thinking a larger invasion would happen elsewhere and delaying reinforcements.

Watch the film below: