American Women Who Served In Combat Before You Were Born

American women have served on the front lines of the battlefield since the United States declared itself an independent nation.... 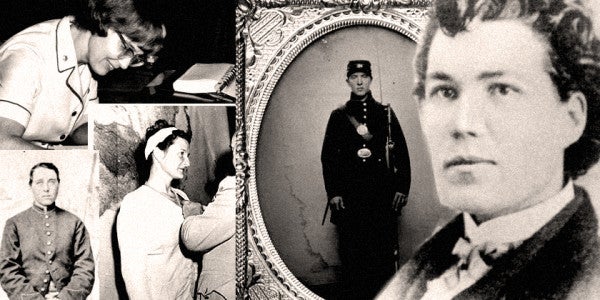 American women have served on the front lines of the battlefield since the United States declared itself an independent nation. Women disguised as men served in order to fight on the battlefields of the Revolutionary War and Civil War, and as formal members of the military in an increasing number of roles from World War I to Vietnam. Each generation of women that served volunteered to support and defend their country in eras when women working outside the home was uncommon or even frowned upon. Here are some of the stories of women who served from the Revolutionary War to the Vietnam War, paving the way for others to serve in front-line combat today.

Deborah Sampson was the first American woman to serve in combat arms. She joined the Continental Army disguised as a man under the pseudonym of Robert Shurtleff in the spring of 1781 — 167 years before women would be a regular part of the U.S. military, and 232 year before the lifting of the combat exclusion ban.

As Sampson’s first mission, she was sent to conduct reconnaissance on amassing British troops in Manhattan. She would see combat in the Battle of Yorktown, and then in again in 1782 in hand-to-hand, bayoneted combat near Tarrytown, New York. She was shot in the thigh during this skirmish, and removed the musket ball herself so that her sex would not be discovered by a doctor. Sampson eventually returned to full duty, and served until the Treaty of Paris was signed in 1783. She received an honorable discharge, and returned to her home of Massachusetts, where she returned to traditional life and married and had three children.

In 1792, Sampson petitioned the Massachusetts State Legislature for back pay from the Continental Army. Remarkably, her petition was approved, and the General Court of Massachusetts not only verified that she had served, but wrote that she “exhibited an extraordinary instance of female heroism by discharging the duties of a faithful gallant soldier.”

Hundreds of women are known to have disguised themselves as men in order to serve in the American Civil War, and the number who actually served is likely to be much higher due to the fact that many women served undetected and returned to traditional roles following the war. The majority were enlisted, and joined for a wide array of reasons. Some joined out of patriotism, devoted to upholding their cause of supporting either union or secession. Other women were drawn to the generous enlistment bonus and monthly pay that far exceeded anything they could make as factory workers or seamstresses. Finally, some women followed beloved male relatives — husbands or brothers — who were often the only family they had.

Sarah Emma Edmonds, originally from Canada, ran away from an abusive family to the United States and fell in love with her adopted country, willing to risk her life to defend it. She would eventually pen her memoirs post-war in 1865, “Memoirs of a Soldier, Nurse, and Spy: A Woman’s Adventures in the Union Army.”

Sarah Rosetta Wakeman and Jennie Hodgers had both previously disguised themselves as men in order to obtain manual labor jobs in the years preceding the war. Both known as the shortest soldiers in their units, each would serve in numerous battles as soldiers. Wakeman wrote numerous letters home detailing her love of rushing at the enemy amid gunfire.

Both Edmonds and Hodgers would file for pensions following the war. Edmonds waited until several years after the war, when wartime injuries came to plague her. Hodgers continued to live as a man after the war in order to maintain her pension and continue to work. When her sex was discovered after an accident, the state of Illinois revoked her pension. In both Edmonds and Hodgers’ cases, their former comrades came to their aid, testifying that regardless of their sex these women had served with honor and deserved the benefits of any male veteran.

Women had already been serving unofficially as battlefield nurses long before the Army Nurse Corps was founded in 1901. And women served on board Navy vessels as nurses a century before the Navy Nurse Corps was founded in 1908. However, these establishments meant that women were officially incorporated in the military, even if they did not yet hold rank. While American women in the First World War did not serve in the trenches, hundreds served in austere field hospitals. These nurses risked their lives during the 1918 flu outbreak killed more than combat itself — four women: Lenah Sutcliff Higbee, Edna Place, Lillian Murphy, and Marie Hidell, were even awarded Navy Crosses for their actions in 1920, although Higbee was the only living woman to receive the honor. The other three women died from the Spanish flu.

World War II was saw women began to hold rank in an increasing number of roles outside of nurses. Women who saw the most front-line action were in fact intelligence officers serving behind enemy lines. Over 4,000 served in the Office of Strategic Services, or OSS, the processor for both the Central Intelligence Agency and U.S. Special Operations Forces. Some of these women were even killed behind enemy lines, engaging in combat with resistance groups, in hidden, secret skirmishes against the Nazis. Others were captured, interrogated, and executed. All were fully aware of the risk that they had taken in volunteering for hazardous duty.

D-Day at Normandy likely could not have happened without the efforts of Virginia Hall, one of the most renowned American women to serve in the OSS. Limping through occupied France on with a wooden leg, Hall mapped parachute drop zones, set up safe houses, and served with a Jedburgh team following the Normandy landing. She helped train French Resistance units to help hold the line against the Germans until the American were able to advance.

Hall, fellow female intelligence officers in the OSS, and its British counterpart, the Special Operations Executive, were therefore the first women in special operations at its very founding.

Over 11,000 women served in Vietnam, 90% of whom were nurses. Eight of them were killed in the line of duty.

More women volunteered to serve in Vietnam than were permitted to go, with all branches of the armed forces choosing to fill stateside and European billets with women in order to send men to the combat zone.

The Vietnam War saw the first female officer, Cmdr. Elizabeth Barrett, to hold an operational command (rather than specialty, such as nursing) in a combat zone. Thirty-two enlisted female sailors became the first women to go to sea, joining the hospital ship USS Sanctuary as members of the administration, deck, operations, and supply departments. This assignment of both women and men to a Navy ship paved the way for women to continue to be assigned to non-combatant ships until full integration of women on all Navy vessels in 1993.

Women veterans of the post-9/11 era face additional scrutiny to their military records and service, and are often taken less seriously than their male counterparts because traditional paradigms dictate that only men can be veterans. Yet American women have served on every part of the battlefield for our entire history. We are not just here too; we have always been here.