Overpaid, Oversexed And Over The Military: A Review Of ‘War Virgin’

The saying “overpaid, oversexed, and over here” may have been true about American GIs during World War II, but today’s... 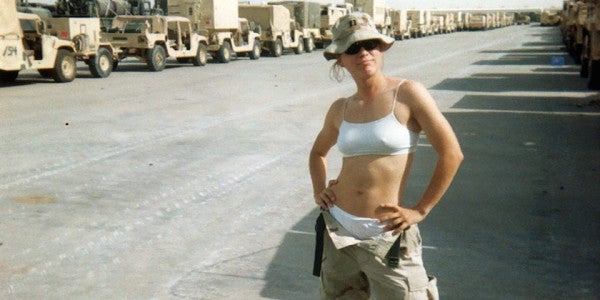 The saying “overpaid, oversexed, and over here” may have been true about American GIs during World War II, but today’s military presents itself much differently. Wartime regulations all but forbid sex in combat zones.

Still, amorous couples always find a way around the regulations. Just ask Laura Westley, Iraq War veteran and creator of the live comedy show “War Virgin: Make Love At War,” now adapted for publication as “War Virgin: My Journey of Repression, Temptation and Liberation.” Think of it as “M*A*S*H” for millennials.

Growing up, her overbearing father tells a teenage Westley she’ll “lose her sparkle” if she has sex, leading her on a hilarious campaign of shaming peers throughout her teenage years as she tries to spot her classmates’ “sparkles.”

After being accepted to West Point, she falls in with a religious mentoring group which teaches young female cadets — many of whom would soon be leading platoons in Iraq and Afghanistan — to be deferential to their future husbands, and above all, chaste.

Praise the Lord and pass the ammunition.

Soon after Westley graduates from West Point, she finds herself not just a virgin to war, but a virgin at war during “the invasion liberation of Iraq” in 2003. Most Post-9/11 Veterans are all too familiar with General Order Number One, the catch-all regulation forbidding sex, alcohol — even sniffing canned air. In Westley’s account, that regulation ironically made sex just that much more countercultural.

Westley’s (pseudonymous) supervisor keeps her working late to combat his own loneliness, then tries to cop a feel one night. Her brigade commander — a colonel in the style Apocalypse Now’s Bill Kilgore and who mercifully never pinned on his star — hands a Pepperidge Farm sausage to a junior enlisted soldier, coyly asking if she’d “like a bite of his sausage” while riding in the back of a Black Hawk helicopter during a mission which would later net him a valor award. And, yes, Westley tells us that same brigade commander is later shocked to find women reporting sexual harassment throughout the brigade.

Westley manages not to lose her sparkle despite skinny dipping in Saddam Hussein’s pools and taking the phrase comrade-in-arms just a little too literally. She returns from Iraq to finally have sex; but after waiting 24 years (and about 240 pages), the result is anticlimactic for Westley, and therefore the reader.

Her prose and humor keep the military’s ironic puritanism on display. Though the book lacks the song-and-dance routines of its live-action counterpart, Westley’s quips and one-liners make “War Virgin,” for lack of a better word, “sparkle.”