A rare D-Day flag that flew on a U.S. Navy ship leading the allied advance at the beaches of Normandy nearly 75 years ago will be returned to America after going on display in the Netherlands on Monday 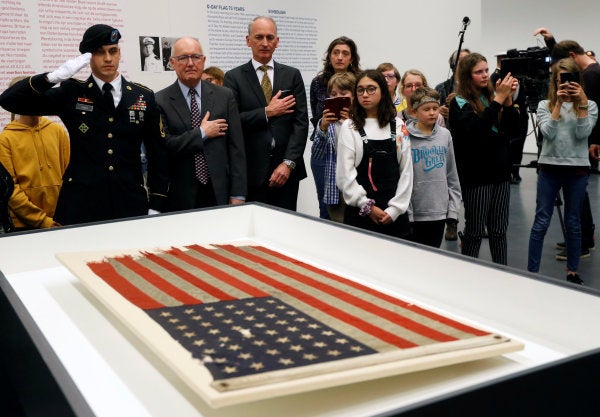 ROTTERDAM (Reuters) – A rare D-Day flag that flew on a U.S. Navy ship leading the allied advance at the beaches of Normandy nearly 75 years ago will be returned to America after going on display in the Netherlands on Monday.

The 48-star “Normandy” flag was on the U.S. Navy's LCC 60, one of just three advanced fleet vessels directing troops onto Utah Beach in German-occupied France on June 6, 1944.

“It was pierced by German machine gun bullets and ripped by the wind,” said Kreuk. “The flag will be going home.”

Rotterdam's orchestra played “Fanfare for the Common Man”, written in 1942 by U.S. composer Aaron Copland, as the flag was laid into a display case by soldiers.

“We are making sure that the White House is aware of this opportunity,” said Hoekstra. “Vander Beek carried it in his backpack across significant parts of Europe until the end of the war. They are all special, this one is maybe a little bit more unique,” Hoekstra said.