‘The Many Faces of War’ Isn’t A Comfortable Book, But It’s A Damn Good One

'The Many Faces of War' is a well-researched, creative, historical, mythological and academic look at war, in the cold and often harsh light of trauma, damaged brains, mythology and a very broad sweep of literature 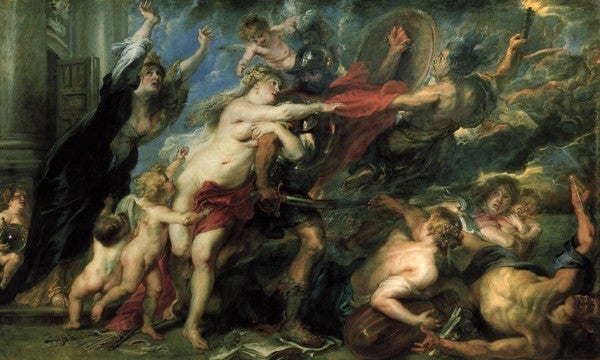 The Many Faces of War is a well-researched, creative, historical, mythological and academic look at war, in the cold and often harsh light of trauma, damaged brains, mythology and a very broad sweep of literature. It cast a light on the shadows lurking in dark, hidden and often unspoken corners of our minds, souls, our faces and the timeless and historical territory of the battlefield.

This is not a comfortable look that romanticizes the Warrior and killing. It opens into the invisible wounds scratching away at the veneer masking the depths of pain and terror. It looks at the “Beast” and “the elephant” that is rarely addressed. It moves across the landscape of holistic health care that defies the narrow parameters of evidence-based modalities. It addresses the adjustment impacts on the returning Warrior and the futility in trying to regain what is lost whether it is through medication, therapy, alcohol or drugs. The book addresses the tragedy of the impossibility of making that which is seen in war become unseen as it etches into our brains, bodies and stories.

The book invites the reader to critically look through a number of lenses at the many faces of war. It journeys through the literature on war exploring and juxtaposing the viewpoints on the war from the American war story genre and to cultural and political perspectives. It dives into contemporary American war literature which redefined the landscapes of narratives about the Iraq war. Through a diverse range of literature, we are brought face to face with the way in which War dismantles a sense of self which has its roots in the experience of violence and it's far reaching impact in the transitions to civilian life.

In exploring the book American Sniper, the writer makes visible the very different view points of Chris Kyle and his wife. We see the conflicting experience around the intrusion of war into the relationship where the need to return to the military tribe can often take precedence to the role of father and husband. We look at the war returning home and the family that become the focus of violent and encapsulated trauma. Through the stories we face the “ghosts and drones, the inescapable satellites of the heat signature of those who live with war-and rightly made visible” by these writings.

The Many Faces of War delves into the territory of comic books as it explores the faces and impact of combat stress. It offers a critical perspective of the simplistic and over-sensational depictions of combat to the traumatic impact of PTSD. It shows the comic genre reflecting the political and contemporary view points. The book explores how comics began to emerge that made visible the unspoken-the torture, the atrocities, reluctance to fight, and the tragic loss of men as well as those broken by their experiences.

The vivid experience of “Vets on the streets” is a heart opening and heart breaking look at homeless veterans lost in the “Forever War”. We are taken on a journey through tattoos as way of keeping memory alive and the strong bonds of Tribe. We witness the War through the eyes of men on the ground and the impacts on returning from combat where from being “inured to death” they are now “desensitized to life”.

From the faces of war portrayed through art, literature and history we are invited to explore and step into not just abstracted and researched perspectives on the “beast” of war but the tragic, heart wrenching lived experience, the suffering, the damage and the War that lives on. That this may be at times a challenging read is part of its value as it dispels romantic and heroic filters of combat and opens readers' eyes and turns their faces towards the violence of war.

Barry Zworestinewas born and raised in Rhodesia. He served in the Rhodesian Bush War in 1976 and understands the trauma soldiers carry with them from the battlefield. Zworestine became a trained clinical psychologist and works to support Australian veterans and current serving as well as veterans in Australia and Internationally. He is the author of Which Way is Your Claymore Facing: An Operational Manual for Veterans Adjusting to Civilian Life.