Surrounded. Low on supplies. Freezing. The Nazis demanded his surrender. He replied: ‘Nuts!” 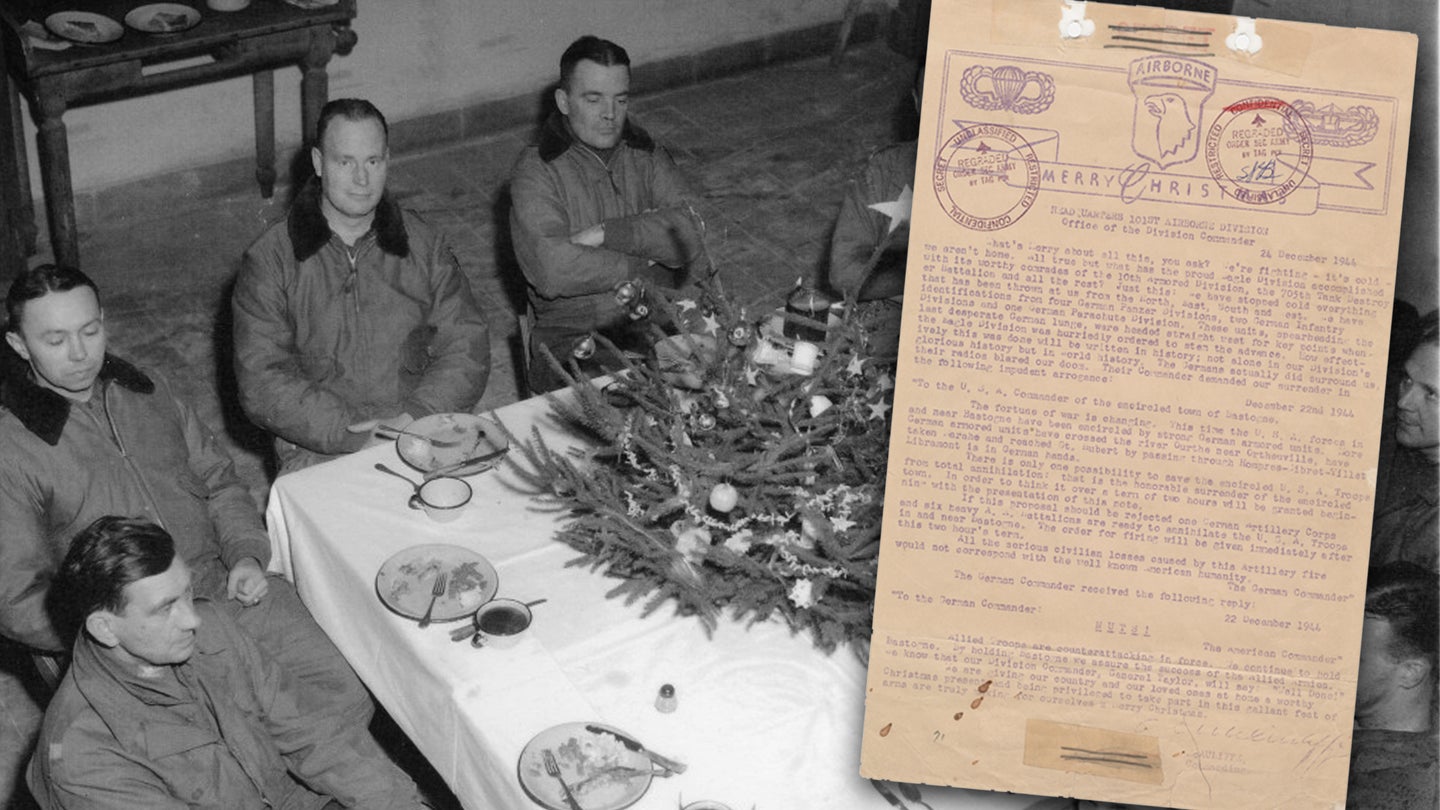 One morning a few days before Christmas in 1944, Army Pfc. Leo Palma looked out of his foxhole near Bastogne, Belgium, and saw something strange. There in front of him on Dec. 22 were four German soldiers waving the white flag of surrender. One officer carried a briefcase under his arm.

The two German officers, a major and a lieutenant, and two enlisted soldiers had walked past an American bazooka team before coming upon Palma, one Browning Automatic Rifle gunner among 14,000 other American soldiers of the 101st Airborne Division. Outnumbered 5 to 1, the Americans had been under siege for the past two days, enduring armored attacks, artillery fire, and frigid temperatures.

German morale was high. “The snow must turn red with American blood,” one German soldier had written his wife of the situation. “Victory was never as close as it is now.” Meanwhile, the American defenders were outgunned and lacking ammunition, food, and cold weather gear. And the harsh winter weather made resupply from the air improbable.

“I want to see the commanding officer of this section,” said Hellmuth Henke, the German lieutenant.

Palma said nothing, according to an official U.S. Army history, but Staff Sgt. Carl Dickinson, who was nearby, called over to the Germans. They said they needed to deliver a message to the American commander in Bastogne.

After donning blindfolds, the German officers left their enlisted men and were taken to an American company command post about a quarter of a mile away. Word quickly began to make its way along the line that something was up, with rumors spreading on the American front that “the enemy had had enough” and was giving up. But the rumor mill was wrong. Wagner, the German major, presented a written message from his commander: Surrender within two hours or face “total annihilation.”

Officers frantically began making phone calls, passing along word that the Germans had threatened “serious civilian losses” from artillery fire that would be unleashed immediately after the two-hour window expired. The division’s acting chief of staff, Lt. Col. Ned Moore, was the first to deliver the news to Brig. Gen. Anthony McAuliffe, the commander of the 101st.

“The Germans have sent some people forward to take our surrender,” Moore told him. McAuliffe, still half-asleep and climbing out of his sleeping bag, responded with one word: “Nuts!”

Eventually, McAuliffe read the full message, which was typewritten in English and German. “They want to surrender?” McAuliffe asked his operations officer. “No sir, they want us to surrender,” replied Lt. Col. Harry Kinnard.

The general laughed. “Us surrender, aw nuts!” he said, before dropping the message on the floor. McAuliffe walked out of his command post and headed toward the western perimeter to congratulate a unit that had destroyed a German roadblock earlier in the morning. As far as he was concerned, according to Army historian S.L.A. Marshall, the Germans were taking “one hell of a beating” and his men could hold out.

Meanwhile, the two German officers were waiting on an official reply. They delivered a formal demand for surrender and wanted a formal response to bring back. So at division headquarters, McAuliffe sat down with a pencil and paper and thought for a few minutes about what he would say.

“Well, I don’t know what to tell them,” McAuliffe wondered aloud to his staff.

“What you said initially would be hard to beat,” replied Kinnard. McAuliffe wasn’t sure what he meant. “Sir, you said nuts,” Kinnard reminded him, drawing applause from other American officers for the pithy initial reply.

McAuliffe wrote it down. “Have it typed up,” he said. The typewritten response was given to Col. Bud Harper, who delivered it to the waiting and still-blindfolded Germans. “I have the American commander’s reply,” Harper told them. Written or verbal, they asked.

“Is that reply negative or affirmative?” Henke asked. “If it is the latter I will negotiate further.”

“The reply is decidedly not affirmative,” said Harper. “If you continue this foolish attack your losses will be tremendous.” The German officers were then put into a jeep and taken back to where the two German enlisted men were waiting. But they were still confused.

“What does this mean?” the Germans asked of the “nuts!” message. Harper discussed how to explain the American slang with Pfc. Ernest Premetz, a medic who spoke German. “Tell them to take a flying shit!” Harper said. Instead, Premetz turned and faced the Germans. “Du kannst zum Teufel gehen,” Premetz said, telling them they could go to hell.

“And I will tell you something else,” Harper added. “If you continue to attack we will kill every goddam German that tries to break into this city.”

“We will kill many Americans,” Henke replied. “This is war.”

“On your way bud and good luck to you,” Harper said.

Despite the German threat, artillery fire never materialized. Instead, small units of German soldiers attacked the American line with small arms and tanks before being beaten back, according to Marshall’s account. Then the German air force began a four-day bombing campaign that failed to dislodge the American defenders. But McAuliffe inspired his soldiers even further with a Christmas Eve message to his troops that explained the situation.

“What’s Merry about all this, you ask? We’re fighting — it’s cold, we aren’t home. All true, but what has the proud Eagle Division accomplished with its worthy comrades the 10th Armored Division, the 705th Tank Destroyer Battalion and all the rest? Just this: We have stopped cold everything that has been thrown at us,” McAuliffe wrote on Dec. 24, sharing the German surrender message and his response with the division.

“We are giving our country and our loved ones at home a worthy Christmas present and being privileged to take part in this gallant feat of arms are truly making for ourselves a Merry Christmas.”

The siege was finally broken on Dec. 26 after elements of Gen. George Patton’s Third Army arrived in Bastogne from the southwest, though the 101st wasn’t pulled from the front until mid-January.

By Jan. 25, 1945, the so-called “Battle of the Bulge” was over, and the Americans were on their way to Berlin. But months before the Germans surrendered in May 1945, an American intelligence report summarized what had happened on that cold day in Belgium, when the tables were turned and the Germans had the upper hand.

“The Commanding General’s answer was, with a sarcastic air of humorous tolerance, emphatically negative. The catastrophic carnage of human lives resulting from the artillery barrage of astronomic proportions which was to be the fate of the defending troops failed to materialize. The well known American humanity was considerate of the threatened possible civilian losses by firing artillery concentrations directed at the enemy’s impudence.”