Military leaders ahead of the herd

Sure, we all know MacArthur, Patton and Eisenhower. Mattis is a household name. Add those bad boys to companies like... 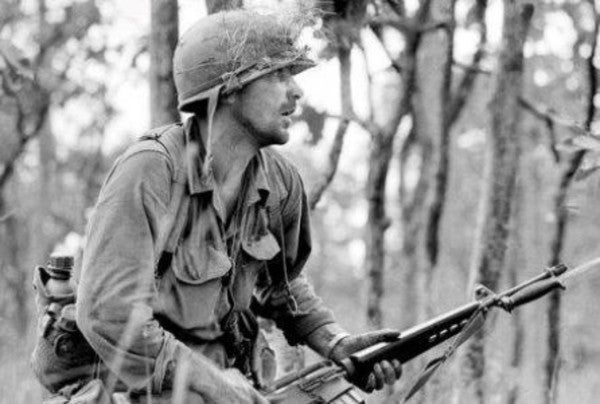 Sure, we all know MacArthur, Patton and Eisenhower. Mattis is a household name. Add those bad boys to companies like Grunt Style and Black Rifle Coffee Company, and we have just a few of the giants in the military world.

But what about the other, lesser-known military greats? We're talking about the ones ahead of the herd that maybe didn't get quite as much press. Dudes with swords, pigeons with crazy endurance, and Black Buffalo, a tobacco alternative to help military dippers keep the ritual and ditch the tobacco. Here are 4 military badasses that you may not have heard of, but need to know.

You might even recognize Rescorla from the cover of the book “We Were Soldiers Once and Young.” The British-born military officer served as a paratrooper, spent some time in Rhodesia and kicked ass and took names everywhere he went. But the real reason Rescorla was ahead of the herd was for his time after the service.

After Rescorla left the military, he joined investment firm Morgan Stanley as a security director. Rescorla was hyper-aware of the vulnerabilities of the World Trade Center where Morgan Stanley was located. In 1990, he and an Army intel buddy sent a report to the Port Authority about the need for more security, specifically to prevent a truck from driving into the parking lot with explosives. Spoiler alert: the report was ignored, and that was exactly what happened in 1993.

Because of this awareness, Rescorla was adamant that his people practice routine fire drills. Every minute away from a desk at an investment firm is time lost, yet Rescorla had the full trust and buy in from his senior leadership to conduct these drills, several times a year for eight years leading up to 9/11.

When the first plane hit, the Port Authority issued an announcement on the PA system for folks in the South Tower (where Morgan Stanley was located) to remain calm and stay put. Rescorla knew better, immediately getting on his bullhorn and telling his employees to do as they had trained. 2,687 of Morgan Stanley's employees evacuated seventy plus floors safely, and only 13 of their employees were lost.

Rescorla was last seen around floor 10, going back up.

Another British Army Officer, Churchill was known for fighting throughout World War II armed with a longbow, a Scottish broadsword and his hallmark bagpipes. You want to find someone leading the charge?

Look no further than “Mad Jack” and his signature motto, “Any officer who goes into action without his sword is improperly dressed.” And you thought those were just for the sword arch at weddings, sailor. Try killing Nazis.

Our favorite Mad Jack story? The one in Operation Archery where he leapt forward from his position to play “March of the Cameron Men” on his bagpipes before launching a grenade and charging into fight. Or, did you hear about the time he captured 42 prisoners including a mortar squad? No? How about the time he got captured and interrogated? Ok, what about the one where he coordinated an evacuation of 700 Jewish doctors, students and patients?

Yeah, we're gonna go ahead and add him to the top of our “If you could drink a beer with anyone” list.

Yes, we know this sounds like a Marvel comic, but White Vision was the name of a homing pigeon in World War II who served with the National Pigeon Service, specifically No. 190 Squadron RAF.

When the weather suddenly turned treacherous, a Catalina from the RAF Coastal Command was turned away from landing and diverted twice before having to ditch in the Atlantic. Radios were dead, and one life boat drifted away with only two men on it, leaving the rest of the men too heavy to occupy the remaining boat.

The crew decided to stay and the captain put their location and their lives in a message for White Vision and another pigeon to carry. The other pigeon didn't make it, but White Vision flew over 60 miles in harrowing wind with very little visibility to deliver the message. It's reported she arrived missing feathers and exhausted, but her valiant efforts led to the rescuing of 11 members of the crew and earned her the Dicken Medal.

In a modern day David vs. Goliath, this company lives the ethos, “No Compromise” with their innovative tobacco alternative products. Black Buffalo respects the legacy of Big Tobacco, but sacrificed years to deliver a kick-ass dip that still has the nicotine but without tobacco leaf or stem. With nearly 20% of active duty military using some form of smokeless products, Black Buffalo saw an opportunity to help service members keep the ritual, but ditch the tobacco.

The Navy veteran grandfather of co-founder Jeffery David (JD) once told him about going the easy way or the hard way. “For us, the easy way would've been to stay in our comfortable jobs and never take a leap of faith for something different.” JD said.

“There wasn't an authentic alternative out there, so we had to create one for the 'greater good of the herd' as we say. We refused to settle. Keep on pushing to charge ahead.”

These are just some of the lesser-known military greats. Grab some Black Buffalo and be the next one to Charge Ahead.

This post sponsored by Black Buffalo. Click here to use promo code T&P for 25% off your first order at BlackBuffalo.com