At long last, you can bring history to life — or just recreate your favorite scenes from 'Saving Private Ryan' 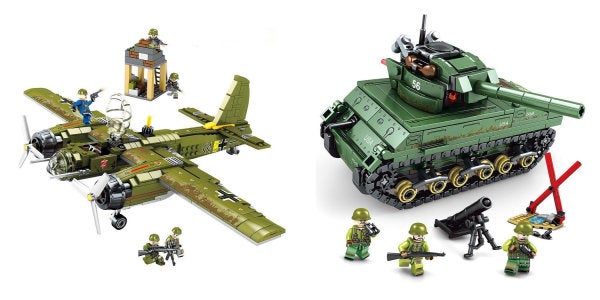 I have many fond memories of playing with Legos as a child. Using my imagination to create ungodly monstrosities; scouring the house for that one damn piece I needed to make the whole thing work; and hearing my father unleash a torrent of F-bombs early in the morning because he stepped on the sharp corner of that one missing piece on his way to the bathroom. Good times.

However, there's one childhood memory I sadly don't have, and it involves storming the blocky beaches of Normandy with a bunch of Lego GIs. Better late than never, I guess:

At long last, you can bring history to life (or just recreate your favorite scenes from Saving Private Ryan) for just $18.90 with the 6-Pack of “US SOLDIERS WW2 MINIFIGURES” found online at The Brick Armory. It's fun for the whole family! Hurray!

And of course, what's a mock war zone without opposing sides?

Though not technically Legos, as Brick Armory's website is quick to remind you, they are compatible with Lego sets, which in their own humble opinion “are super fun to play with.”

Now, the sets can get pricey pretty quickly, with some in the low- to mid-hundreds (though you can find them cheaper elsewhere), but if you desperately need a little armor to clear through that beachhead you've erected in your living room, then maybe grab an M4 Sherman tank — which in this case, is available on Blue Jay Goods for $29.95.

See Also: The Lego SR-71: Because Being A Grown Up Is For Suckers And Spy Planes Are Awesome