This WWII-era flying wing crashed in a California prison yard after doing a ‘barrel roll,’ according to the NTSB

The historic Northrop N-9M flying wing that crashed in a Norco, California prison yard in late April apparently conducted a "barrel roll" before plummeting to the ground, according to the National Transportation Safety Board's preliminary report 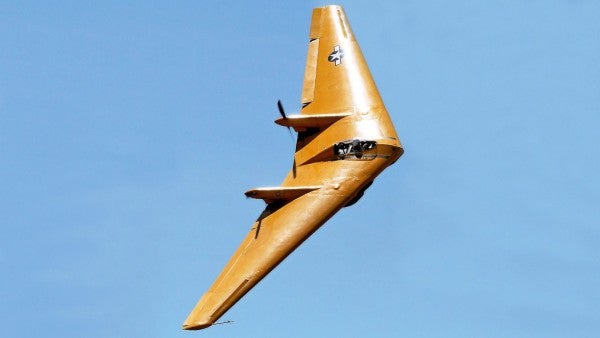 The historic Northrop N-9M flying wing that crashed in a Norco, California prison yard in late April apparently executed a “barrel roll” before plummeting to the ground, according to the National Transportation Safety Board's preliminary report.

One of four flying wings originally built in 1944 as test aircraft in support of the XB-35 and YB-35 experimental bombers developed for the U.S. Army Air Forces, the ultra-rare N-9M crashed at the California Rehabilitation Center on April 22nd, killing pilot David Vopat.

Moments before the crash, multiple witnesses “reported observing the airplane flying on a north eastern heading at a low altitude when it performed a 'barrel roll,'” according to the NTSB report.

“Several witnesses reported that after the maneuver, the airplane 'wobbled side to side' before the airplane's canopy separated. Shortly after, the airplane entered a steep right turn, and descended into the ground in a nose low attitude.”

The loss of Vopat and the N-9M is both heartbreaking and tragically unsurprising given the flying wing's inherent stability problems. But The War Zone's Tyler Rogoway smartly observes, there remains some uncertainty as to whether the “maneuver” observed by ground-based bystanders was actually an intentional barrel roll or evidence of another problem:

I have never heard of the N-9M, an antique that was built in the 1940s, doing barrel rolls at air shows, although that is based on seeing the performance myself and watching videos of it in the past. Such a maneuver in that airframe sounds excessively risky, especially if it hadn't been a staple maneuver that had been repeated many times over at altitude and cleared for air show routines in the past. The low altitude environment that the aircraft was flying in the time of the crash would have offered nearly zero chance of a safe recovery after a departure from controlled flight.

What we don't know for certain at this time is if the maneuver was intentional or if some unknown circumstance caused a maneuver similar to a barrel roll before the aircraft departed completely from controlled flight.

Either way, the vintage N-9M's destruction is a tragedy itself: the spiritual ancestor of the B-2 Spirit, it was the last of its kind.