Timed less for enemy inebriation than sunny skies, the World War II operation would nevertheless be remembered as the "Hangover Raid.” 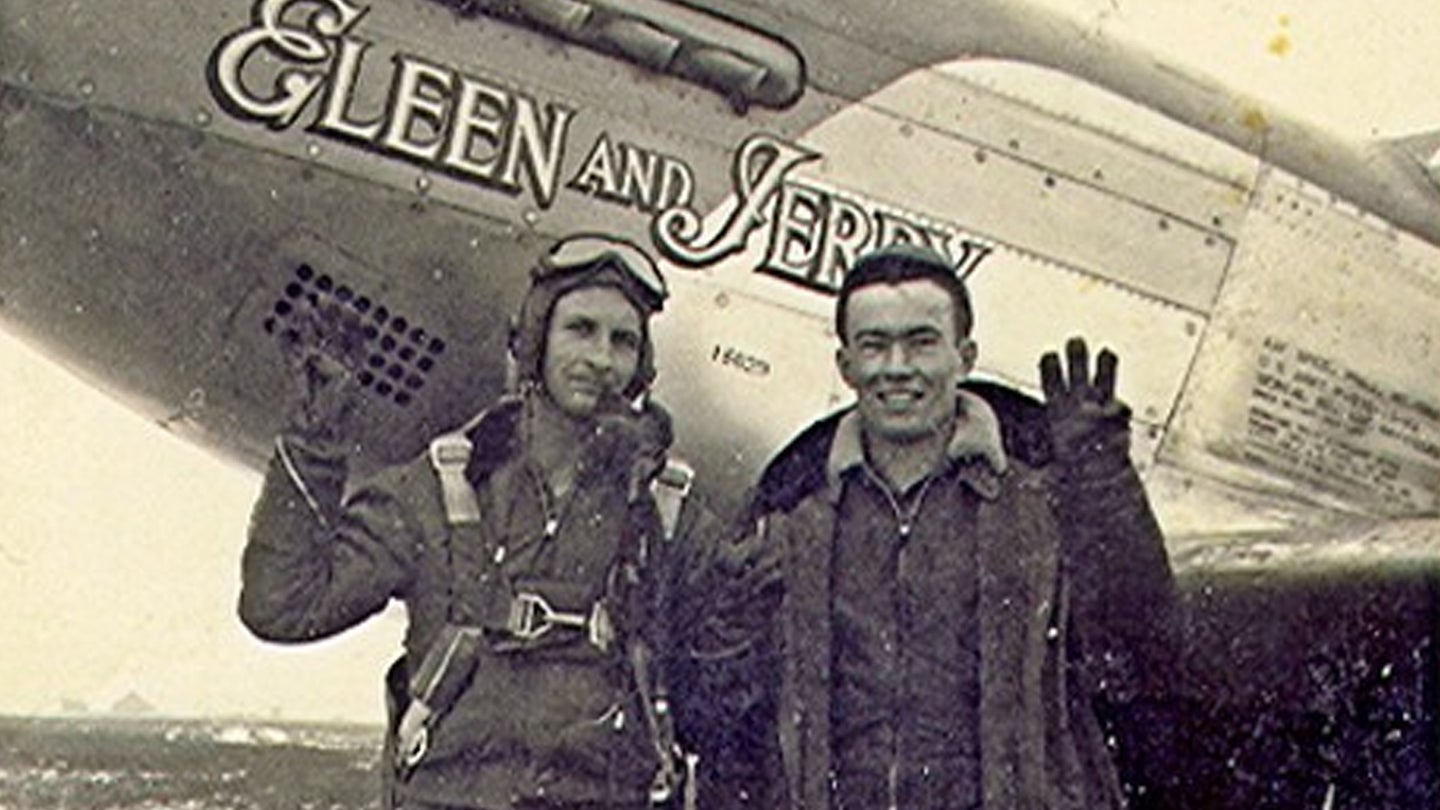 Lt. Alden P. Rigby (L) with Lt. Dean Huston in front of Rigby's Mustang following the "Battle of Y-29", Jan 1, 1945. The military designation for the Asch Airfield was Y-29, and the fight over the airfield during Operation Bodenplatte came to be known as "The Legend of Y-29." (American Air Museum in Britain).
SHARE

The first day of 1945 did not go the way Royal Air Force air controller Sgt. Peter Crowest expected it to. Shortly after reporting for duty at 9:00 a.m. at the airfield at Ursel, Belgium, Crowest and his colleagues detected an incoming group of German Focke Wulf 190 fighter planes.

“We barely had time to judge the extent of our hangovers from the ‘night before’ when we heard and saw a squadron of low-flying fighters approaching,” Crowest said, according to a 2015 Aviation History article published on HistoryNet. “Moments later I was firmly gripping the ground!”

Crowest was one of the thousands of Allied service members along the western front of the European theater in World War II who found themselves in the middle of a surprise air attack by the Luftwaffe on the first morning of 1945. More than a thousand German planes attacked airfields in Holland, Belgium, and France as a part of Operation Bodenplatte (base plate) in a final attempt to destroy Allied fighters while they were still on the ground.

However, poor planning and inexperienced pilots would doom Bodenplatte as the last stand of the Luftwaffe, despite the raid’s successful surprise attack on the Allies’ airfields.

“Timed less for enemy inebriation than sunny skies, Bodenplatte would nevertheless be remembered as the ‘Hangover Raid,’” wrote Aviation History. “In contrast to the festivities on the Allied side, celebrations and alcohol were verboten that night to German pilots, who mostly went to bed early, slept if they could and rose in the wee hours.”

The German fighters maintained complete radio silence as they flew a mere 150 feet above the ground in the darkness of the winter night. German Ju-88 and Ju-188 night fighters lit the way with flares. The plan was to strike just after dawn, which at that latitude at that time of year was at 9:20 a.m. The incoming aircraft made a dramatic entrance over Allied lines, according to a radar technician named Cpl. Geoffrey Coucke, who was posted on top of a lighthouse overlooking the Scheldt River in Belgium.

“They passed on both sides and many were nearer the ground than my perch,” the technician recalled in the Aviation History article. “I shall always remember that grandstand view of the last major effort of the Luftwaffe.”

However, the low altitude proved to be a double-edged sword, as not all German flak crews had received the memo that large formations of friendly aircraft would be flying overhead.

“What a mess, and this following several weeks of preparation,” said Ju-88 pilot Sgt. Erich Heider after evading friendly flak near the Netherlands’ Ijssel River, according to Aviation History. “The operational plan was no good.”

To make things worse for the Luftwaffe, at least one of the target airfields had been deserted while others were heavily fortified. But the German aviators attacking the American 365th Fighter Group in Metz, France, found plenty of fully-loaded P-47 Thunderbolts to destroy.

“Look at those P–51s buzzing the field,” said one American soldier, according to a 2005 article for the Smithsonian’s Air & Space Magazine. “P-51s, my ass!” said another. “Those are Germans!”

Indeed, 16 Messerschmitt Bf 109s screamed in from the north, catching the pilots, ground crews and aircraft in the open.

“As dozens of startled men dashed for cover in nearby gun pits, the German fighters hammered the field with long bursts of machine gun and cannon fire,” according to Air & Space Magazine. “Bullets and shells from the 109s’ propeller-hub-mounted cannon blew holes in the parked fighters. Explosions cracked across the open field as gas tanks caught fire, detonating bombs and ammunition.”

One soldier with the 388th Squadron, Cpl. Emanuel Catanuto, saw his friend Cpl. Lee Weldon was trapped in the cockpit of a burning P-47 and had been shot in the thigh. Catanuto ran through the smoke and heat, opened the cockpit and pulled Weldon out, tumbling back off the wing in the process.

“Grabbing Weldon by his good leg, he dragged the blood-soaked mechanic 30 yards to safety,” Air & Space Magazine wrote. “Suddenly, the P-47’s fuel tanks and bombs exploded, engulfing the two men in a hail of shrapnel. Both miraculously escaped unharmed.”

Other Americans responded differently to the attack. At one point a Bf 109 crashed on the flightline and threw out the body of its pilot, who came to rest a few feet from Flight chief Alvin Brady. The soldier saw justice in the grim sight.

“They got us into it, after all,” he said, according to Air & Space.

“I saw a ring on his finger,” said a crew member, according to Air & Space. “If I’d had something to cut that finger off, I would have probably got that ring off him.” But someone else had beat him to it.

The attack knocked out 22 P-47s, badly damaged another 11 and wounded at least 11 men, effectively putting the 386th Fighter Squadron out of action.

“It was terrifying to be on the receiving end of the tactics we’d been using all along,” an American pilot, 2nd Lt. Carl Riggs, said at the time, according to Air & Space.

Overall, Bodenplatte cost the Allies about 250 aircraft and 150 damaged planes, but the Luftwaffe came away almost as poorly, partly because experienced (and not hungover) Allied fighter pilots intercepted many of them. For example, when British Spitfire pilot Flight Lt. R.C. Smith encountered the attacking Luftwaffe over Eindhoven in the Netherlands, he dove straight in despite being outnumbered 40 to one, “scoring a Messerschmitt and attacking nine others before running out of ammo,” according to Aviation History. American P-47 pilot 1st Lt. Melvyn Paisley enjoyed similar success, downing four German aircraft over Belgium. The Americans shot down 32 enemy planes in total over Asch, Belgium.

“We hope at least one of their pilots got back to tell the story,” said 366th Fighter Group commander Col. H. Norman Holt, according to Aviation History. “They’d think twice before trying it again.”

Part of what allowed the Allied pilots to shoot down so many of their foes was due to the inexperience of the Luftwaffe pilot corps, who had been thoroughly diminished after six years of fighting on many fronts. Instead of hitting the airfield and running low and fast, the German pilots kept popping up and circling back to strike targets, which gave anti-aircraft crews more chances to shoot them down.

“Weave you stupid bastards!” British Flight Lt. Ronnie Sheward recalled yelling at the enemy aviators as they flew straight and level while being shot at by ground crews over Antwerp-Deurne, Belgium, according to Aviation History. A fellow British aviator had a similar opinion of the enemy performance.

“If any of my boys put on a show like that I’d tear them off a strip,” said Group Capt. Denys Gillam, according to Aviation History.

One American ground crewman at Asch saw some of that inexperience when a group of German pilots kept strafing a B-17 bomber on the ground that had already been cannibalized for spare parts.

“Nine or ten Jerries would go for the B-17 and try to get a big victory, but it had no fuel or anything to catch fire, so it just sat there and absorbed their gunfire like a large sponge!” said the crewman, according to Aviation History.

The attack was over by noon, with the surviving Luftwaffe pilots retreating in ones and twos. More than 200 German pilots had been killed or captured. “Nearly half fell to flak, too much of which was their own,” according to Aviation History’s account of the World War II battle.

The Allies quickly recovered from their New Year’s Day losses. Air & Space Magazine wrote that pilots from all three squadrons of the 365th Fighter Group were back in the air that afternoon due to the fast work of the ground crews, who cannibalized the wrecked P-47s for spare parts.

Luftwaffe Sgt. Stefan Kohl saw a similar feat after being shot down by flak at Metz-Frescaty. Under interrogation, the fluent English speaker pointed out the window at the smoking Thunderbolts and asked “What do you think of that?” A few days later, before Kohl was sent to a prisoner of war camp, a fresh fleet of “shiny new replacement P-47s” arrived to take the place of the wrecked ones, as if Bodenplatte had never happened, Aviation History wrote.

“What do you think of that?” Kohl’s interrogator asked.