Raiding Hitler’s liquor cabinet atop the Eagle’s Nest: The story behind this iconic Easy Company photo

What better way to end the war. 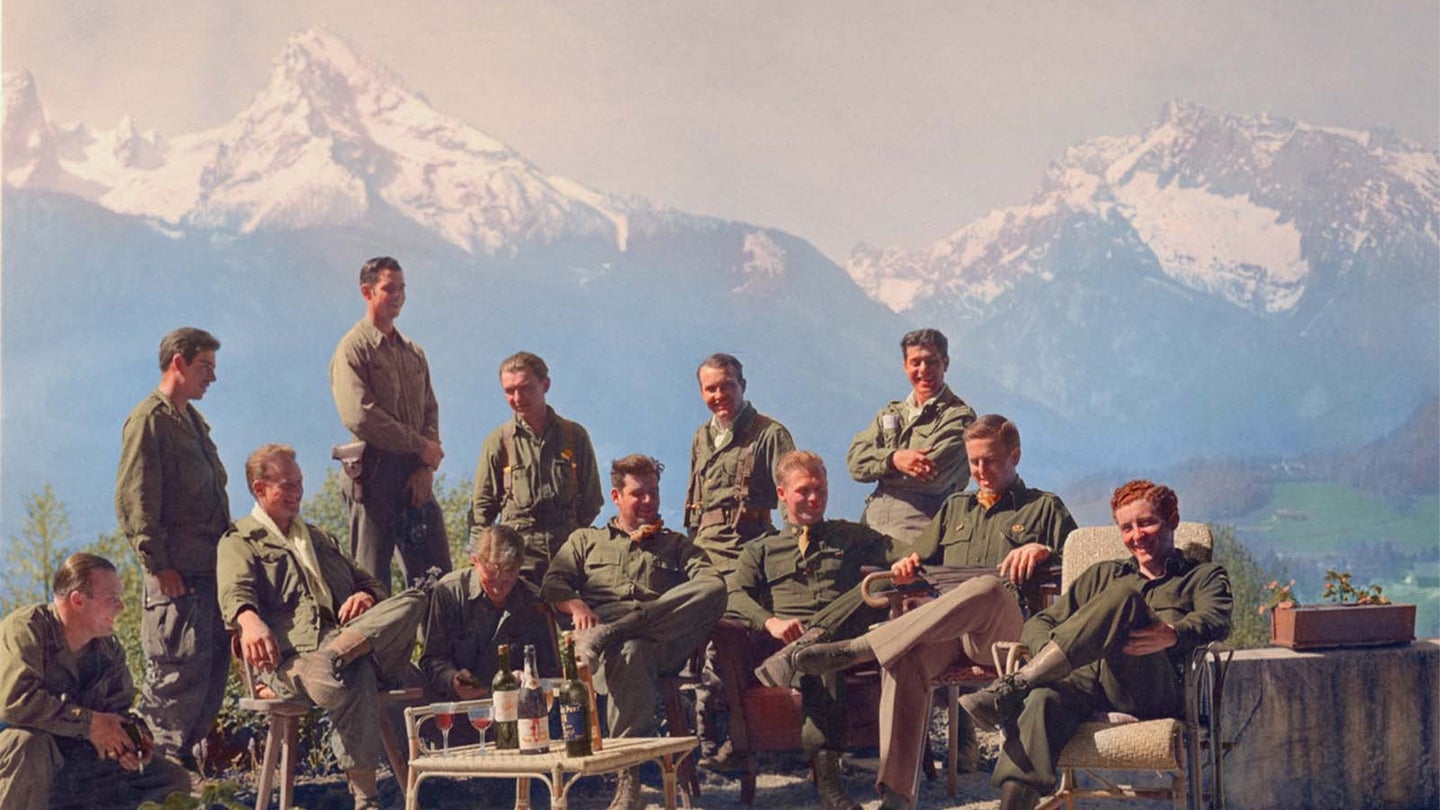 After spending almost a year fighting across France, Holland, and Germany, during World War II, one hard-bitten unit of Army paratroopers celebrated the end of the war in the most fitting way possible: By taking in some incredible alpine views while guzzling down one of the largest collections of alcohol in the world – and one owned by Hitler himself, mere days after the dictator’s death.

Anyone who has seen HBO’s Band of Brothers knows that Easy Company and the rest of the 506th Parachute Infantry Regiment ended the war occupying Berchtesgaden, home of Adolf Hitler’s “Eagle’s Nest” mountain villa. The town was also a de-facto second headquarters for the Nazi government. As Allied forces approached Berchtesgaden, each unit nearby vied for the opportunity to be the first to seize the town, and the prestige that would come with being the first to occupy Hitler’s Nazi getaway in the mountains. However, the story behind that operation, like many stories from war, is a bit more complicated than the narrative we get on screen.

On the morning of May 4, 1945, there were three units – the 7th Infantry Regiment of the 3rd Infantry division, the French 2nd Armored Division and the 506th PIR – in position to enter Berchtesgaden. While the 101st Airborne and the French units had been given the honor of entering Berchtesgaden first, the 3rd Infantry Division operated on a “ask for forgiveness not permission” principle and sent two battalions to capture the town, encountering little resistance along the way.

How many members of the 7th Infantry Regiment made it to the Eagle’s Nest, at the end of a long, winding road on a mountain peak overlooking the town, is debatable, as they didn’t end up staying for very long. The next day, as the 506th PIR and French units were entering the town, the 7th Infantry Regiment was already preparing to move on. Not entirely empty-handed, though, as the unit was apparently able to load up on 6,000 bottles from Hermann Goering’s personal wine cellar.

It did set the stage for the 506th PIR’s 2nd Battalion, including Easy Company of Band of Brothers-fame, to more officially occupy Berchtesgaden and its environs for the next several days as the war in Europe ended.

While the military complex on the slope below the villa had been bombed, the Eagle’s Nest itself had escaped any damage, which meant plenty of opportunities for the 2nd Battalion and Easy Company to make their way up to Hitler’s former mountain retreat and take in some of the best views the Bavarian Alps had to offer. (Hitler himself had died just a few days prior on April 30, of a self-inflicted gunshot wound in a bunker in Berlin.)

And with views like this, there were plenty of other high-ranking Nazi officials – Goering included – who had built their own fully stocked mountain villas. Which offered plenty of opportunities for the men of the battalion to liberate some very pricey bottles of booze from Nazi cellars, which is how this photo came to be.

Now, there is some question as to whether this specific photo, showing Maj. Richard Winters, Cpt. Lewis Nixon, and Lt. Harry Welsh, was taken at the Eagle’s Nest itself or another villa in Berchtesgaden. But, considering the battalion was in the process of working its way through the biggest stash of booze in Europe – Nixon apparently reserved five truckloads for the officers of the battalion, including the ones seen here – it’s not hard to conclude that it was simply marked “Eagle’s Nest.” After all, it wouldn’t be a good story without a little exaggeration.