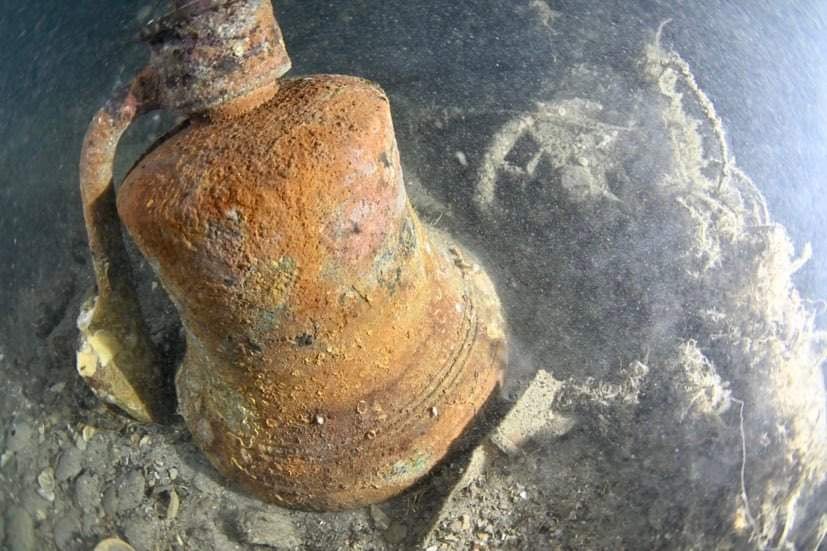 The bell from the wreck of the USS Jacob Jones, which was located this month off the coast of England. (Rick Ayrton).
SHARE

More than a century after it sank beneath the waves off the southwestern coast of England, the USS Jacob Jones has been found. Members of the UK’s Darkstar diving team announced they located the wreck of the World War I destroyer on Aug. 11. It was found 60 miles south of Newlyn, Cornwall, roughly 120 meters deep, according to Darkstar team member Steve Mortimer.

The USS Jacob Jones was one of six Tucker-class destroyers built by the U.S. Navy. Initially commissioned in 1916 and on duty patrolling the Atlantic coast, it was sent overseas when the United States entered World War I. While deployed, the crew rescued survivors from several shipwrecks; their biggest mission involved recovering 305 survivors of the British cruiser Orama after it was hit by a German torpedo.

Its final hours came on Dec. 6, 1917. On its way back to the British Isles from France, the USS Jacob Jones was hit by a torpedo from the German U-Boat U-53. Unable to dodge the torpedo, it started to take on water and the commander gave the order to abandon ship. Within eight minutes, the USS Jacob Jones was beneath the waves. It was the first American destroyer to be sunk by enemy fire.

The German U-Boat surfaced and captured two wounded sailors, while transmitting the location of the survivors to an American base. The German captain requested an hour to leave the area. U-53 left and the survivors of the USS Jacob Jones were rescued, yet 64 of the warhship’s 110 crewmembers died in the attack. The ship’s executive officer Norman Scott eventually reached the rank of rear admiral. He was killed during the Naval Battle of Guadalcanal, one of only two American admirals to be killed in World War II. He was posthumously awarded the Medal of Honor.

The dive to identify the wreck of the USS Jacob Jones this month presented challenges, according to Darkstar team member Dominic Robinson. Divers had to contend with a strong, shifting current.

“Identifying a wreck of historical significance is always going to be a brilliant experience but doing it at over 100 metres and so far out at sea magnifies that,” Robinson said on Facebook.

The dive team confirmed the identity of the wreck but did not disturb any part of the ship.

“Nothing was removed from the wreck site,” Mortimer said.

Mortimer said on Facebook that the dive team is in contact with the U.S. embassy to coordinate next steps.

The USS Jacob Johnson is the latest lost American ship to be discovered this year. The USS Samuel B. Roberts, sunk in 1944 in the Battle off Samar, was located on June 22. It was the deepest shipwreck ever found.