These are the security forces protecting nuclear sites in the United States. 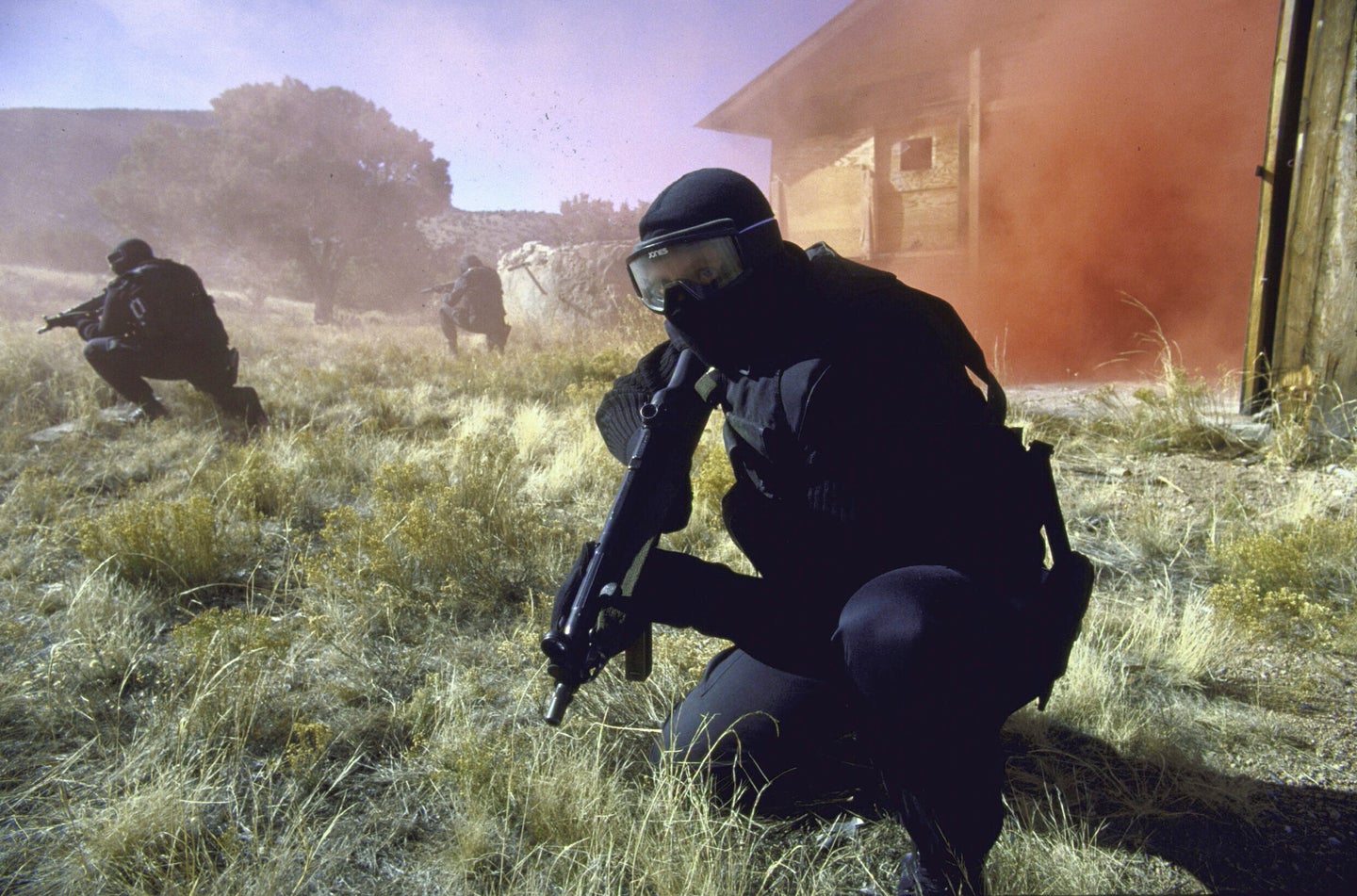 Tactical gear and special operations training are not limited to just the ranks of the U.S. military: Various U.S. government agencies and departments have militarized law enforcement and SWAT units formed to deal with emergencies, attacks, and hostage situations, among other exigencies. That said, looking like an “operator” is not always the same as being one, but it’s still not too surprising to discover that the Department of Energy has its own elite task force — and that it absolutely means business.

During the late stages of the Cold War, the DOE’s anti-nuclear terrorism team looked like menacing black ops commandos straight out of a video game. Seriously:

Photojournalist Steve Northup captured a series of images of the obscure team in training back in 1987 at the Department of Energy’s Central Training Academy, now known as the DOE National Training Center, which is on Kirtland Air Force Base in Albuquerque, New Mexico. According to the department, the pictures are from a tactical crisis resolution training, where Northup captured team members responding to a simulated attack, moving through the wilderness, clearing small cabins, and firing on targets. Team members plowed through an obstacle course, conducted marksmanship training, and rappelled from helicopters — all skills needed if they had to respond to a potential nuclear terrorism threat.

And boy, do they have the look down: all-black outfits that leave nothing exposed, giant goggles, and a large shotgun. One of the team members captured in Northup’s photos even has two 1911s holstered to his chest. It’s almost a parody of what a commando might wear on a stealth mission. And don’t worry, they have other outfits beyond the black knitwear:

Even when not in full Snake Eyes-from-G.I. Joe gear, team members still look like a cross between Counter Strike opponents and the specially-trained teams from Stargate SG-1.

The Department of Energy has a large force of highly trained fighters for emergency situations, since they are the security teams charged with protecting the country’s nuclear weapons and reactors, and specifically what the department calls “Category I special nuclear material.” Established in the 1950s, these security teams are officially known by the vague moniker of Federal Protective Forces (FPF) and are currently situated under the jurisdiction of the National Nuclear Security Administration (NNSA), a semi-autonomous arm of the DoE. The NNSA oversees the United States’ nuclear arsenal and nuclear reactors, and the FPF are the armed teams needed for the security response aspect of that mission.

The FPF is made up of contractors, rather than pulled from the Defense Department, although members require security clearances to work in their assignments. Under their direct mission, stemming from the Atomic Energy Act of 1954, the unit’s main job is to prevent any outside force from seizing “Category 1” nuclear material. To that end, they’re trained to defend sites against potentially overwhelming forces. They also have some jurisdiction to make arrests, if they see a threat.

Among the FPF, the department also fields special response teams, which are meant to handle special operations such as hostage rescue or regaining control of any stolen nuclear material. The teams go through rigorous training to meet any potential threat. That includes ambushes while transporting nuclear material (a job the NNSA handles), direct attacks on facilities, and responding to potential nuclear terrorist incidents. NNSA policy calls for a special response team to be stationed at every site with nuclear material. And these forces are heavily armed with armored vehicles, miniguns, and other weapons. Those teams are also backed up by the wider group of Federal Protective Forces at each Department of Energy site.

After the Sept. 11, 2001 attacks, the Department of Energy worked to reorganize the FPF to be more ready. That meant new gear and more armaments, and wider SWAT training for the overall force. Although they might still have their all-black commando looks in the 1980s, the units use modern camouflage and uniforms. But if you ever see a shadowy armed force outside a nuclear test site or reactor, never doubt the apparent lethality of the Department of Energy.