Last week, hundreds of people traveled to Shrub Oak, New York to attend the funeral of Robert Graham, a 97-year-old veteran who served in the Pacific as a Marine Raider during World War II. 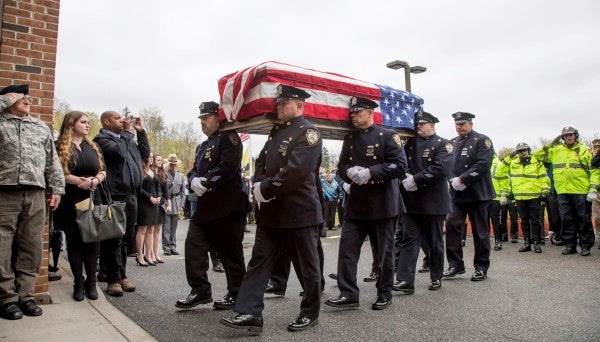 Last week, hundreds of people gathered in Shrub Oak, New York to attend the funeral of Robert Graham, a 97-year-old veteran who served in the Pacific as a Marine Raider during World War II. The attendees came from all across the state, many were veterans themselves, and few if any of them had ever met Graham.

But they came just the same because they heard he wouldn't have any family at his funeral, a local CBS news affiliate reported.

Graham died April 12 at Yorktown Rehabilitation and Nursing Center in Yorktown reports the Associated Press. Graham's wife of 60 years, Rosie, passed away two years ago, and with no close relatives, and few friends from his Marine days left, Graham's passing may have gone unnoticed, if not for the efforts of Beth Regan.

“I was afraid the funeral was not going to be well attended,” Regan, who volunteers at the nursing home where Graham lived, told CBS. “I thought there would only be a handful of people there.”

When Graham passed away, she took to social media and asked for people to attend his funeral, telling CBS that she “thought there would only be a handful of people there.”

Word quickly traveled and when Graham was laid to rest on April 26, his funeral included a police motorcade, an escort, and more than 200 military veterans, police, and firefighters from across the state in attendance.

According to the Associated Press, Graham fought at Guadalcanal and Bougainville as a member of the Corps' elite Marine Raiders, and earned both the Silver and Bronze star medals for his service in the Pacific. After the war, Graham returned to New York, and worked as a corrections officer.

“I just wanted to make sure people would attend,” Regan told the Associated Press. “He'd be floored. He wouldn't understand why so many people are out there celebrating him.”