Instead of passing on guidance to his leaders, it seems he is not interested in delegating, or he doesn't trust them at all. 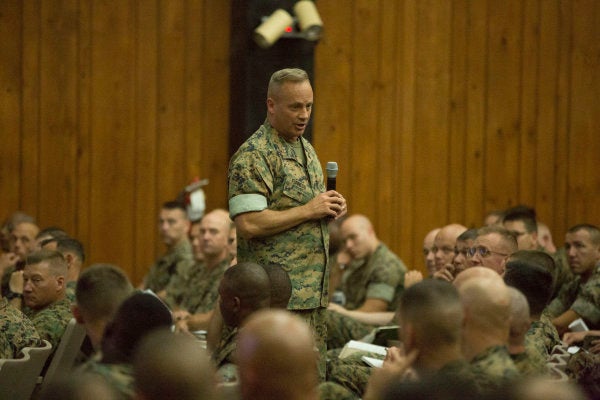 The two-star general in charge of the roughly 15,000-strong 2nd Marine Division has turned micromanagement into an art form with a new policy letter ordering his Marines and sailors to cut their hair, shave their faces, and adhere to a daily schedule that he has prescribed.

In his “Policy Letter 5-19,” Maj. Gen. David Furness lamented that he has noticed “a significant decline in the basic discipline” of troops he's come in contact with in the division area, which has led him to “FIX IT immediately,” instead of relying on the thousands of commissioned and non-commissioned officers below him to carry out his orders.

In the letter, sent to the entire division, Furness writes that “we have allowed Marines and Sailors to walk around with long hair, nonexistent or poor shaves, unserviceable boots and utilities and improper civilian attire. There are weeds growing around our buildings and work spaces and trash everywhere but the dumpsters where it belongs.”

Besides airing grievances regarding discipline and professionalism, Furness went on to outline a routine schedule that “EACH AND EVERY Marine and Sailor” should embrace, beginning with a 5:30 a.m. reveille and ending with liberty at 4:45 p.m.

“Any dissenters can answer to myself, the division , or the and will be dealt with accordingly,” he wrote.

It's worth noting that this letter came from a major general, who has at least a couple hundred colonels, lieutenant colonels, captains, sergeants major, and first sergeants below him, ready to carry out his commander's intent.

But instead of passing on guidance to his leaders, it seems he is not interested in delegating, or he doesn't trust them at all.

“I believe in giving commanders the latitude to do the job,” Furness said in an interview with All Marine Radio on Friday. “I don't like getting into people's business, but when you consistently see it not being done; the primary responsibility of any leader in the Marine Corps is you supervise them and trust them to the level necessary to accomplish the mission.”

“When you see that more direction and supervision is required, you must do that. That's what this is about,” he added, later noting that most of the Marines and sailors in the 2nd Marine Division are doing “what we want them to do all the time” and working hard to be “better warfighters.”

Still, despite his claim that most of his Marines aren't as jacked up as his letter makes it seem, they'll now be subjected to mass punishment for the few that don't have proper shaves or haircuts. And apparently every leader in the 2nd Marine Division, in Furness' eyes, is incapable of maintaining their Marines to standard — which is either true or a giant slap in the face.

I think it's probably the latter, as Furness' letter essentially undermines all of his subordinate leaders as ineffective and weak; no doubt many of their junior Marines will perceive it as such.

As part of Furness' multi-step plan to improve discipline while, in my opinion, losing the respect of most of the division's leaders, he's holding a unit-wide “leadership and discipline stand down” between June 3-7, he told AMR. There, he's planning to speak to every sergeant, staff non-commissioned officer, and officer in the division.

“The letter is just step one in a multi-step plan to get the division back on the right pathway,” he said in the AMR interview.

“It's important that these junior Marines understand, look: I'm not doing this just to see them clean their rooms,” Furness said. “They have to trust me that I'm looking out for their best interests by developing habits in them that I know lead to success on the battlefield. And since 90% of them haven't been there before, I think they need to trust some of us who have.”

But trust goes both ways.

Perhaps Furness should trust the hundreds of leaders under him and respect their authority on issues that should be unimportant to a general — what's happening around the dumpsters is one — and instead focus on higher-level command issues and stop treating more than 15,000 Marines like children.

And if the general wanted these problems addressed, maybe he should have made clear his commander's intent and trusted his subordinates to carry it out. As a general officer, it's his duty to review and relieve substandard commanders who are not fixing the problems he mentions.

In the interview, Furness said that “we're not doing either one of those things particularly well at the moment” after mention of the words “leadership” and “discipline.” And I agree with his assessment, with a caveat: His statement should apply to the headquarters of the 2nd Marine Division.