Transitioning Home: One Vet’s Journey From The Marine Corps To Cintas

When military service is over, being able to return home is often top priority. For Thomas England, the end goal was to find a job back home in Kansas City so he could provide a stable life for his family. Through Cintas, he found an occasion to do just that and has thrived in the process. 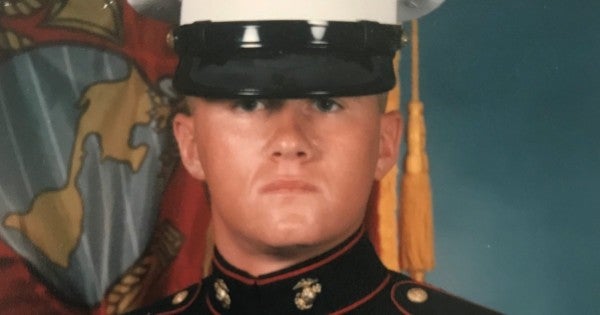 Military service takes people all over the globe and offers unique experiences. Those opportunities are invaluable. However, when military service is over, being able to return home is often top priority. For Thomas England, the end goal was to find a job back home in Kansas City so he could provide a stable life for his family. Through Cintas, he found an occasion to do just that and has thrived in the process.

For England, serving in the Marine Corps was second nature. He enlisted in the delayed entry program in 2000 prior to the start of his senior year in high school because it was the right thing to do. “I was willing and able and it was a good time to do it,” he said. He was not excited to go straight to college after high school graduation and the Marine Corps provided him with a chance to gain valuable experience at a young age. It also led to opportunity. After his first year as an enlisted Marine in the Marine Corps Reserve, England was contacted by his recruiter notifying him that he had been selected for a full ride NROTC scholarship. England then choose to attend the University of Kansas. That call was the catalyst for England to further his education and after college graduation in 2006, England was commissioned as a 2ndLt spending the next 7 years as an Armor Officer. As an officer, England spent his first several years with 2nd Tank Battalion where he deployed in support of Operation Iraqi Freedom and was selected ahead of his peers for Company Command. His later years were spent as a Project Officer at the Marine Corps Warfighting Laboratory (MCWL) including a year as MCWL's Commanding General's Aide-de-Camp. England gained advanced tactical, operational, communication, problem solving, and leadership skills during his time in the Marine Corps, never realizing that these same skills would serve him for years to come.

In 2013, it was time for a change. England had proudly served his country and was now longing to return to Kansas. “One of my personal goals was to return to Kansas City,” he said. “I wanted stability for my family and I wanted to be home.” While accompanying his wife to a hiring fair, England came upon another opportunity when he learned about Cintas and all they had to offer him as a veteran.

Cintas, a Fortune 500 company, provides a multitude of specialized business services including custom uniform programs, cleaning supplies and services, promotional products, floor mats, first aid cabinets and supplies as well as fire protection services. The hard working, industrial aspect of the company appealed to England. He went on to explain that strong work ethic is at core of Cintas' culture. “It is a lot like working in the military,” he said. Another aspect that England loved was the opportunity for career advancement with a rapidly growing corporation. “I was drawn to Cintas because they have three divisions in one location,” England said. Cintas offered opportunities in everything from sales and marketing to operations, customer service and project management. He recognized early on that a career with Cintas presented an occasion to “change careers without changing companies,” allowing him to settle down in Kansas City and still have possibilities for career growth.

Since he first began with Cintas in 2014, England quickly advanced within the company. He started as a Service Manager with their Rental Division before moving on to work in various sales positions, including a Market Development Rep, Uniform Sales, and his current position as a Market Sales Manager in the Fire Protection division. Each position presented new challenges none the less, England excelled as both a leader and as an individual contributor.

Like many veterans, England faced challenges as he transitioned out of the military and into the corporate world. “I never had experience in corporate America before the military,” he explained. “I didn't know what to expect.” But he was motivated by change and chose to view the challenges as a positive. The military taught him to not fear change but rather to accept these difficult moments head on. England had acquired a “challenge accepted” mentality that helped spur him forward in his transition.

One of the biggest challenges England recognized was the interview process. “It was very long,” he explained. “I went through five or six levels of interviews before getting the job.” England advised veteran job seekers to be prepared for each step of the process. “First impressions are important,” he said. “Be ready with a new suit and tie and make sure you look professional.” He recommended starting the job search early and identifying what specifically is important in an employer. “Conduct research on different companies and their culture so you can find a company that fits your goals instead of the other way around.”

England advised all veteran job seekers create a comprehensive list of specific, personal attributes to offer a company. Leadership was number one for England so when beginning his job search he did just that and came up with a detailed list to articulate his leadership experience and philosophy to present to future employers. He explained, “I wrote down teambuilder, complex problem solver, positive mental attitude, operational planning skills, strong communicator, things that directly link back to my service in the Marine Corps.” This helped him stay focused with how he marketed himself and aided him in his job search.

England also suggested veterans learn to leverage their advocates when seeking employment. “Letters of recommendation are extremely helpful,” he said. Job seekers should have a list of solid references they can present to all potential employers. Further, England recommends veterans seek opportunities to do mock interviews. “Find a list of frequently used interview questions and rehearse with a friend or spouse. The more rehearsals, the better.”

Veterans need to recognize the unique strengths they bring to the table, which often differ from those of a civilian counterpart. England's military service provided him with the specific skills he needed to land and succeed in his career with Cintas. “The culture at Cintas is very similar to the culture of the military,” he explained. “Both focus on camaraderie, teamwork, professionalism, continual improvement, and competitiveness. Both encourage and expect hard work and workers are rewarded for that.” This shared culture made the transition from the military to the corporate world much smoother for England. The recognizable values at Cintas have made it easier for the company to attract and retain veteran employees like England. Cintas' reputation for being a military-friendly employer has opened the door for veterans looking for a place to land after their service.

For England, a man who is not afraid of challenges, opportunities abound. He knows where to seek prospects and he knows how to accept them when they come knocking. That attitude propelled him through a successful career with the Marine Corps and continues to guide him in his career with Cintas. Working for a veteran-friendly company has provided England with unparalleled growth; being able to find success while living in his beloved hometown of Kansas City is the best opportunity available.