"The Eagle, Globe, and Anchor and No Better Friend, No Worse Enemy phrase are trademarks of the Marine Corps protected by Federal law. In accordance with 10 U.S. Code § 7881, the seal and emblem should not be used in conjunction with any political activities." 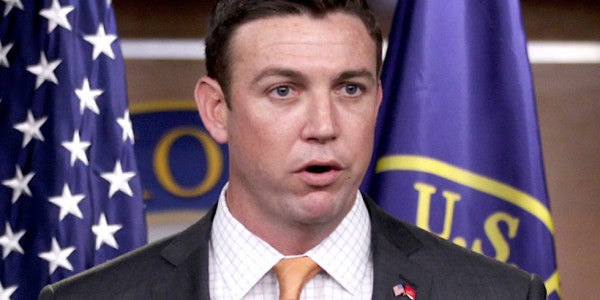 The Marine Corps Trademark Licensing Office has sent Hunter, a Marine veteran, a cease and desist letter telling him to quit using the Eagle, Globe, and Anchor emblem along with the phrase, “No Better Friend, No Worse Enemy,” on a fundraising mailer that accuses his political opponent of having links to terrorism, NBC News first reported on Wednesday.

“Please be advised that you are more than welcome to simply and accurately state that you are a Marine Corps veteran, or provide other information about your service that is based on fact,” according to the letter, which NBC News posted online. “As an alternative, we do offer a 'Marine Veteran' logo (Attachment B) for use by Marines to indicate their pride in service.”

“The Eagle, Globe, and Anchor and No Better Friend, No Worse Enemy phrase are trademarks of the Marine Corps protected by Federal law,” Butterfield said. “In accordance with 10 U.S. Code § 7881, the seal and emblem should not be used in conjunction with any political activities.”

Butterfield was unable to provide Task & Purpose with a copy of the letter, which he described as, “Official correspondence between the U.S. Marine Corps and Rep. Duncan Hunter's office.”

“It is personally disappointing to Congressman Hunter that he is now being told that he cannot use this motto or image that thousands of Marines like Congressman Hunter, who went to war under this banner, have used for tattoos, coins, and multiple other items of personal sentiment,” Harrison told Task & Purpose. “It is as much a part of them as it is the Marine Corps.”

A former major in the Marine Corps, Hunter has always included a disclaimer in his campaign materials explaining that any use of his rank, job, and pictures of him in uniform are not official endorsements by the Defense Department or Marine Corps, Harrison said.

Meanwhile, Hunter faces several legal woes after being indicted in August 2018 for allegedly using 250,000 in campaign funds for personal use, such as paying for extramarital affairs with five women. His trial is expected to begin in September.

Hunter also offered an odd defense of Navy SEAL Eddie Gallagher during a May 28 interview with Barstool Sports' Zero Blog Thirty podcast, claiming he “killed probably hundreds of civilians” including women and children while serving in Iraq as an artillery officer.