Eighty-eight homes at Fort Bragg were flagged for risk of carbon monoxide poisoning. The issue came to officials' attention after... 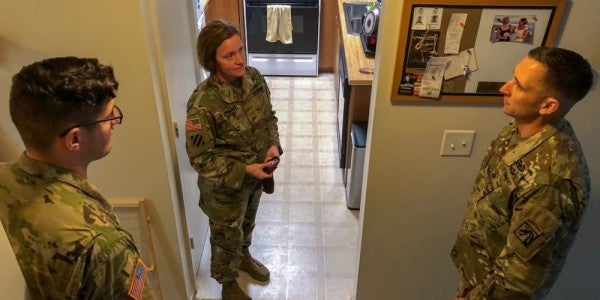 Eighty-eight homes at Fort Bragg were flagged for risk of carbon monoxide poisoning.

The issue came to officials' attention after one family in the Pope neighborhood at Fort Bragg went to the Womack Army Medical Center showing symptoms consistent with carbon monoxide poisoning, Fort Bragg said in a press release. The family was treated and released the same day, August 4th.

Three days later, another family in the same neighborhood “reported a petroleum odor in their home,” according to the release.

The cause of the issue in both families' homes was found to be the heating ventilation and air conditioner (HVAC) unit in the laundry room. Officials have notified residents both over the phone and in-person to ensure they are aware of the situation, and safe.

“The health and safety of our service members and their Families is, and always will be, a top priority for Fort Bragg leadership,” Col. Philip D. Sounia, the garrison commander, said in the press release. “When they are at risk, it affects the readiness and resiliency of all involved.”

The press release says that the Department of Public Work's Family Housing Office found that in the HVACs, the “main air intake duct was partially blocked,” and that families were closing the door to the laundry room — where the HVAC unit and hot water heater, both gas appliances, are located — while they did laundry.

Tom McCollum, Fort Bragg public affairs officer, told Task & Purpose that because the main air duct intake was blocked in the reported instances and the door to the laundry room was closed, the HVAC started pulling fumes released by the hot water heater and pushing the fumes into the rest of the house's ventilation.

So, they've taken the laundry doors off.

“This week,” the release states. “Corvias will remove the doors to the laundry rooms of all 88 homes and conduct tests of the unoccupied homes to find a quick and permanent solution.”

McCollum said that other solutions are being considered, but that the problem “would never have happened” if the laundry doors had not been closed, as an open door allows more air circulation into the laundry room. One of the solutions under consideration, McCollum said, is removing the HVAC from the laundry room, though nothing has been instituted yet.

Tamara Terry, an active-duty Army wife of almost four years who lives in Corvias housing at Fort Bragg, told Task & Purpose that the “entire base is appalled at what's happening.”

“What is going on? You're telling me you have over 100 homes at risk … and you're just letting them stay there? Knowing that it's a risk, you're allowing them to still live in those homes with their children?”

She added that removing the doors is “not actually fixing the problem,” and that they should “take out and put it somewhere else. … They're once again not getting to the root of the problem.”

A recently released Army survey of privatized military housing found that satisfaction in privatized housing decreased by 6% this year. Corvias' family housing was the lowest-scoring company, and had the “highest rate of decline” for its overall score, per the survey.

Corvias spokeswoman Kelly Douglas referred questions to Fort Bragg's news release. In July, Douglas told Task & Purpose the company wants “to hear from residents and we are listening and responding, providing better service and working with our Army partner to meet both the short- and long-term military housing infrastructure needs.”