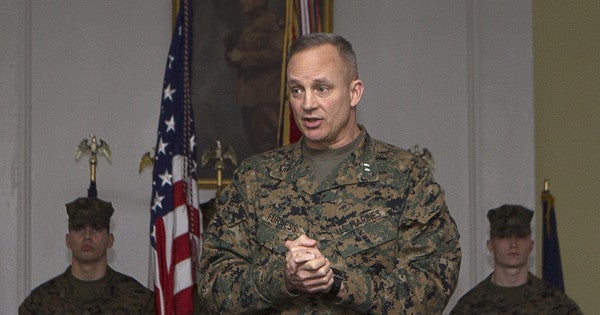 The claim by Maj. Gen. David Furness was regarded by a number of Marines reached by Task & Purpose as insensitive, since it suggested that a Marine killed by enemy action could somehow be to blame for their own death. The general made the remark while connecting things Marines do in combat with things they do in garrison as a way of explaining his decision to release a letter outlining steps to correct disciplinary and leadership problems in his unit.

But it didn't seem to come out very well.

“In Iraq and Afghanistan, I was presented right up front with the fact that the more disciplined a unit is going into a fight, the less it bleeds, period,” Furness said on All Marine Radio, which is hosted by a Marine he previously served with. “I've seen it played out time and time and time again.”

Furness served as the commander of Regimental Combat Team-1 in Afghanistan during a year long deployment beginning in Sep. 2010. There were 21 Marines assigned to RCT-1 that were killed in action during his time there, according to the Defense Casualty Analysis System.

“These basic breaches of attention to detail are a direct result of not habituating yourself to the small details that you learn how to do in garrison activity,” Furness said. “It's not chickenshit. This is all about combat performance.”

“It's everybody's responsibility,” Furness added, before mentioning a specific incident from the deployment in gruesome detail: “Like I said the whole thing about not wearing a seatbelt and the driver killing himself because he hit an IED and he went 200 G's into the steering wheel and separated his aorta from his heart, and he bled to death. Well, why didn't his tell him to put his seat belt on?”

“That kid could be alive today if that one act was done. Why wasn't it done?”

Task & Purpose reached out to 2nd Marine Division to ask for more specifics or other information that may have helped to put the quote in context.

“As a commander, I have always regarded the responsibility of training my Marines with the utmost gravity, because that's what they are owed in preparation for combat — our best efforts to prepare for the most challenging environment known man. I have nothing but respect and admiration for the Marines that have served under my command, and even more so for those young men who gave their lives in the service of our country.”