An active-duty Marine who ran the Boston Marathon on Sunday to honor three men who died by his side in Afghanistan finished the race the only way he could — on his hands and knees. 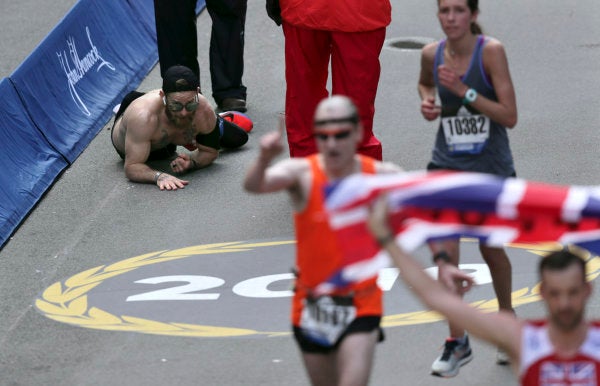 A Marine veteran who ran the Boston Marathon on Monday to honor three men who died by his side in Afghanistan finished the race the only way he could — on his hands and knees.

Micah Herndon, a 31-year-old Ohio native assigned to the 1st Battalion, 3rd Marines and veteran of several deployments to Iraq and Afghanistan, crawled across the finish line of the the grueling 26-mile slog he entered to honor two fellow Marines, Mark Juarez and Matthew Ballard, and British journalist Rupert Hamer.

Micah Herndon, a former Marine who survived an IED explosion in Afghanistan in 2010, collapsed and crawled to the finish at the Boston Marathon.

He says he now runs in honor of the three Marines who were lost in the ambush. (via @dana_gio6) pic.twitter.com/WfIj3OpR1h

The three men were killed in Afghanistan when a 400-pound improvised explosive device hit their Mine-Resistant Ambush Protected during the Invasion of Marjah in 2010, according to the Record-Courier.

It was the the first of several IEDs that strike Herndon's fellow Lava Dogs during theiir deployment; Herndon himself narrowly survived a 50-pound IED blast that knocked him from his MRAP's gun turret.

“I run in honor of them,” Herndon told the Record-Courier. “They are not here anymore. I am here, and I am able. I am lucky to still have all my limbs. I can still be active. I find fuel in the simple idea that I can run. Some cannot.”

When he returned home from Afghanistan, Herndon found himself burdened by survivor's guilt and started running “once he realized he was addicted to the adrenaline that raced through him and the love he had in honoring” his fallen comrades, as the Record-Courier put it.

Indeed, Herndon shared a photo on Facebook the Friday before the marathon of his pair of orange Nike running shoes featuring three small golden plates emblazoned with Juarez, Ballard and Hamer's names.

'I feel like if I am not running, then I am doing something wrong with my life,” Herndon told the Record-Courier. “If I get a heat cramp while running or my feet hurt or I am getting exhausted, I just keep saying their names out loud to myself. They went through much worse, so I run for them and their families.”

That exhaustion struck during Herndon's final stretch of the Marathon, when the Marine faltered mere yard from the finish line. But the memory of his fallen friends kept Herndon moving.

“Both my legs just gave up,” Herndon told The Washington Post. “[But] I kept repeating those names … The thoughts of their memories and their families flowing through the mind just like they always do.”