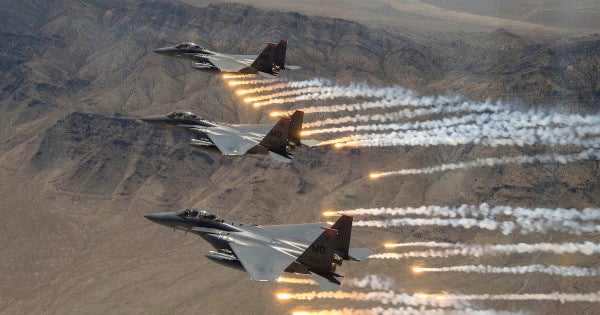 A cadre of Idaho residents are suing the Air Force over the “extraordinary and unprecedented” urban training exercises planned to take place in nine cities across the state.

In a complaint filed earlier this month in the U.S. District Court of Idaho, a group of Boise residents allege that the Air Force's Urban Close Air Support Air and Ground Training Project — proposed by the 366th Fighter Wing at Mountain Home Air Force Base in January — endangers the safety of Idahoans by “authoriz thousands of annual overflights of F-15 military jets, coupled with on-the-ground troop activity within the cities, occurring day and night.”

Civilian complaints about military exercises in their neighborhoods aren't unusual, but this complaint alleges that the Air Force Urban CAS Training Project “establishes a permanent urban military training program centered over nine cities across southern Idaho, from Boise to Burley … for up to 160 days per year.”

A map of a representation of the area around Mountain Home AFB that would be used for the urban air support training(U.S. Air Force)

Prior to mission training operations, F-15E aircrews would maintain flight in a circular path, known as a CAS wheel, in the airspace that overlies the farther outskirts of town or the outermost edge of the 15-NM radius from the urban center point.
…

Ground teams would be working within the urban center in accordance with their particular force position (FFOR or OPFOR). To begin a mission scenario, members of the FFOR team would contact aircrews flying in the CAS wheel with a request for air support to identify and locate a hostile threat. The aircraft would separate from the CAS wheel, fly toward the urban center point, and be guided with instrumentation and communication to identify, track, and simulate neutralization of the OPFOR.

Of course, citizens in those nine cities apparently had no idea this was going down: Air Force officials allegedly kept their plans to transform unsuspecting civilians into the military equivalent of non-player characters.

“Despite the vast scope of the Project and the potentially impacted population, the Air Force did little to notify or seek input from the public during this scoping period,” according to the complaint.

As the War Zone notes, Military Operations In Urban Terrain (MOUT) have gained increasing importance among military planners in recent years as the Army and Marine Corps expand their large-scale urban combat capabilities. Indeed, during the liberation of Raqqa in 2017, one A-10 Thunderbolt II squadron provided CAS against ISIS snipers hidden in the densely-populated city, earning a Gallant Unit Citation for their efforts.

But this surreptitious training might make the sudden appearance of strange folks in the center of town a bit suspicious, frankly.

“Ground support personnel are dressed and behave in a manner that is consistent with the civilian community to avoid drawing attention to the operations,” the Air Force document states. “To facilitate aircrew tracking of identified targets, lead JTACs may be positioned in or on buildings in areas that provide broad lines of sight. Remaining ground support personnel may be positioned anywhere on the installation such as in vehicles driving along streets or parked along the side of a road, walking along sidewalks, or walking into or out of buildings.”

In an alternate universe, “permanent urban military training program” planned and executed with little public notice might trigger a major freakout over the specter of, you know, military occupation — perhaps not unlike the insane conspiracy theories that cropped up back in 2015 during the now-notorious Jade Helm military exercise, maybe? Well, not really, per the Air Force document (emphasis ours):

Aircrews would use the on-board weapons firing simulation system to mock bomb identified targets. The proposed training operations would not involve use of weapons to fire munitions. Munitions would not be loaded on the F-15Es that are flown during the proposed proficiency training operations. Ground teams would not carry weapons. All interactions between air and ground teams would be achieved through use of electronic equipment including tactical communication radios (e.g., frequency modulation, very high frequency, ultra high frequency, and satellite communication), navigational GPS for maintaining awareness of target locations, low-power, eye-safe infrared training lasers for marking targets, and computer simulation systems on board the aircraft.

Perhaps these exercises won't be as freaky as, say, the Night Stalkers who scared the bejesus out of unsuspecting Los Angelenos during their own urban training exercises earlier this year. But even so, the nighttime simulated CAS runs are scheduled for between 10pm and 3pm; even if the complaint goes nowhere, Mountain AFB is about to earn itself a new gaggle of angry neighbors.

“We don't comment on pending litigation,” Lt. Emileigh Rogers, a spokeswoman for the 366th Fighter Wing, told Task & Purpose when reached for comment. “We haven't been served any papers, so there's nothing to comment on.”

SEE ALSO: The Night Stalkers Cruised Through The Streets Of Los Angeles And Scared The Hell Out Of Everyone

WATCH NEXT: Bill Murray Was An Urban Warfare Visionary