The Air Force wants to make it rain blood

Someone in the Air Force has either been dutifully studying their Old Testament or listening to a ton of Slayer, because the service's latest test study is one bloody show 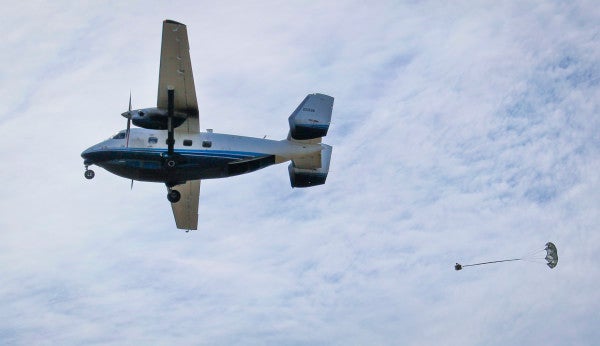 Someone in the Air Force has either been dutifully studying their Old Testament or listening to a ton of Slayer, because the service's latest test study is one bloody show.

An Air Force C-145A deliberately jettisoned a cooler full of blood over Eglin Air Force Base in Florida back in April as part of Operation Blood Rain, a study designed “to determine if fresh blood could withstand an airdrop to combat medics in austere environments,” according to a recent story from the 96th Test Wing.

The end goal of the research is to determine whether drones could potentially deliver critical blood supplies to combat medics downrange, thus extending the so-called “golden hour” window of opportunity for medics trying to save troops' lives amid traumatic battlefield injuries.

Operation Blood Rain is a combined effort between 96th Medical Group doctors and 492nd Special Operations Wing combat aviation advisors that, beginning in January, sought to develop the logistics and the tactical process for the study.

“The nature of the CAA unit with its teams of medics, pilots and aircrew flight equipment, made for easy communication of the requirements for the project,” according to the 96th Test Wing release. “This benefit specially enabled the team to move fast and compress Operation Blood Rain’s timeline from concept to action.”

The test in April involved dropping four 350 milliliter bags of blood secured in a cooled box out of the back of the C-145 at approximately 115 mph while flying about 200 feet above the ground.

The blood landed “safely” and was examined for any visible damage on the scene before Eglin AFB laboratory technicians analyzed the samples for impact damage, according to the release.

The Eglin lab team concluded that “there was no breakdown or disintegration in the red blood cells of the airdropped blood samples,” according to the release.

While the team's research has now determined that airdrop is “a viable way” of delivering blood to combat medics, their next step “is to continue to develop the blood drops with various aircraft and ground conditions to determine the results are replicable,” according to the release.

This is clearly a useful new practice in development, and we commend the Air Force for pursuing new and innovative ways to deliver blood to wounded service members in need.

Still: Operation Blood Rain? I'm just going to leave this here because I know you thought of it too.