"Don't say no immediately to something just because it seems weird..." 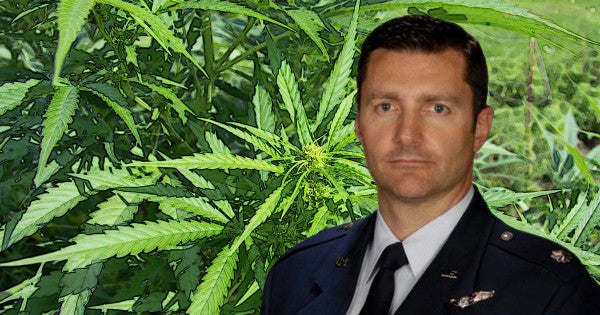 Shon Williams never expected he’d be making his living off of weed.

A career Air Force officer, Williams served two decades in the service from 1994 and 2014. Between working on satellites as an aeronautical engineer, the West Point graduate found time to wrap up his master’s degree in astronautical engineering, with a concentration in rocket propulsion — which kind of makes him a literal rocket scientist. Add to it that his resume includes flying 29 different types of aircraft as a test pilot; managing a multi-billion dollar acquisition program to develop the F-15 variants for sale to Saudi Arabia; and for good measure, a seven-month deployment in support of counter-terrorism operations in Afghanistan in 2011.

By the time he retired from the Air Force as a lieutenant colonel in 2014 it seemed like there was a clear path laid out: Williams took his decades of training, education, contacts, experience, and his security clearance, and headed to the private sector to work in the aerospace industry, and there he stayed, for a time.

Then a year and a half later, he got a cold call from a recruiter asking if he had ever thought about trying his hand at something new? Something like cannabis.

“I said no at first, actually,” Williams told Task & Purpose. “I had no knowledge of cannabis, no interest — it was illegal to me. I had a Top Secret Clearance and it was a risk to go into it, because I couldn’t come back to my chosen field.”

But the recruiter, who worked for the Mjardin Group, a cannabis consulting firm, persisted, and eventually Williams came around.

“I look back and it’s just a lesson for me and others: Don’t say no immediately to something just because it seems weird or it’s something that isn’t in your area, it might be one of the best things that’s happened to you,” Williams added.

He worked with Mjardin as a director of business development for roughly a year and a half, before starting his own cannabis company in Denver, Colorado in 2017. A year later, the company was sold to Westleaf, an Alberta, Canada-based marijuana business that cultivates, extracts, manufactures, and sells its cannabis products through their own retailers. Williams took a job there as the group’s chief development officer in 2018, and he and his team manage everything from the company’s supply chains, to its construction efforts, real estate, and security.

His current gig means Williams doesn’t have to navigate the hazy legal space that U.S.-based pot growers and sellers have to contend with — recreational and medicinal cannabis use is legal in Canada. Nonetheless Williams has some tips for vets and transitioning service members looking to break into the legal weed game.

So, if you have high hopes of making a career in the cannabis industry, here’s what you need to know.

Take your time warming up to the idea

It took Williams a while to get comfortable with the weed industry, especially in light of his first encounter with pot.

“My mom would be really upset if she hears this,” he said. “But there was one time in high school where I took one puff, and I got scared and I ran down the street thinking ‘I’m a good kid!?'”

Seeing as he spent most of his adult life in the military, it would be decades before Williams tried cannabis again. Due to the drug’s classification as a Schedule 1 substance, it’s illegal under federal law, and that means it’s barred in the military. For those in uniform, the consequences for popping hot on a urinalysis test are severe, and typically involve a service member being punitively separated from the military, which can preclude them from receiving Veterans Affairs benefits, like disability compensation or using the Post-9/11 G.I. Bill.

And for some transitioning troops and vets, the taboo surrounding marijuana is tough to reconcile.

“I’m certainly not judgmental of that,” Williams explained. “I was there. It was illegal and it was wrong, that’s what I had in my head. The more I’ve actually done my own homework and my own research and gotten involved in it — I live and breathe this every day — the more I’ve done that, the more I’ve realized that there really is a lot of bad information out there. There’s a stigma that really isn’t appropriate for both the industry and the plants and the products that come from it.”

Do your own research

“It’s not a bad plant,” Williams said of cannabis. “It’s a plant that has a lot of benefits. I’m not saying it solves all the problems of the world, but it definitely has a place. It’s not in the illegal space. It’s in the legal space, but controlled and regulated. It’s got so many medicinal benefits and other benefits I never understood prior to being in the industry.”

The push for cannabis legalization has picked up momentum in recent years, buoyed by popular support and a growing body of research, along with plenty of anecdotal evidence, that indicate the drug has tangible medical benefits for certain conditions. Currently, cannabis is legal for medicinal use in 33 states, and legal for recreational use in 10, though the exact rules governing what can be sold, to whom, and in what form, vary state-by-state.

“Get some real facts, talk to some people first-hand,” Williams said. “There’s so many people, to include veterans; there’s so many veterans who have been helped who were drug addicts on legal drugs and have gotten themselves off. And other medical conditions where nothing would help them.”

While service members are barred from using the drug, even in states where it’s legal, the Department of Defense regulations on working in the industry are a bit hazy.

The existing policy is based on guidance from 2014 which stipulates that anyone who ignores federal law about the “the use, sale, or manufacture of marijuana” could be denied a security clearance, Jeff Schogol previously reported for Task & Purpose. That said, there’s nothing in writing that bars service members or DoD civilians from owning stock in companies that legally sell marijuana products.

Whether or not that will change is unclear, so it’s a risk worth thinking about very carefully.

If your background isn’t in growing cannabis, or even horticulture or greenhouse work, that doesn’t mean there’s not a place for you in the industry. Like any business, it takes all kinds of people to make it run.

“Cannabis is like a regular industry,” Williams told Task & Purpose. “It’s not just growing weed out in the mountains. It’s a real industry that has real needs. It takes all different kinds of backgrounds to put a business together: you need people with financial backgrounds; you need attorneys; program managers; technical people; engineers; architects; designers; operational folks; and some folks that are familiar with the plants.”

“There’s all kinds of different backgrounds you can bring to bear on the cannabis industry that are really needed,” he added.

Once you’re in the industry: Be a professional

“Don’t cut corners,” Williams cautioned. “Be entirely within the regulations, be very compliant.”

“This federally illegal part is a bit of a weird nuance that I had to become okay with, coming out of the federal government,” Williams continued. “Being okay with being in a federally illegal industry, but having some federal guidelines that allowed the states to have their own legal industries, I got okay with that, because I felt like I was operating in a legal framework, albeit not federally legal, but state legal.”

Business is booming, but don’t expect bags of money to land in your lap

“You have a chance to be a part of one of the fastest growing industries in the world, while also contributing to improving people’s lives,” Williams said. “I really believe that. If you really get involved with a great team of people in this space you can wake up every day, just being excited with what you’re doing.”

“It’s not something that’s without work,” Williams explained. “It’s a ton of work and you have to bring skills to the table. Gone are the days of ‘If you get in, bags of cash are going to get thrown at you.’ That happened in the early days of the legal industry where anyone who was willing to take the chance and get in was probably making really good money, and you didn’t have to be that good of a business.”

Finally, you need to play to your strengths

Regardless of what your job was in the military, it’s likely you picked up a few skills along the way that’ll help you wherever you end up, and that includes the marijuana industry.

“Leadership is certainly something most people get out of their military background,” Williams said. “Really being able to work with a team and either leading a team or being part of a team is really important.”

To hear Williams describe it, cannabis doesn’t sound that different than any other industry, and in some ways is reminiscent of uniformed life — well, except for all the ganja.

You have to be organized, and you need to be able to pivot at the drop of a hat to some new task or mission.

“Adaptability and being able to be very responsive and agile,” is important, too, considering it’s a fast-moving and evolving industry, Williams said. Though perhaps the most important thing to do when you’re transitioning from a life of high and tights and crisp uniforms to helping people get high with crisp rolling paper, is to remember the core values that made you successful in the military.

“They’re really relevant and really valuable,” Williams said. “Make sure you don’t compromise those to be in the industry. Just have fun with the journey. It’s nowhere I expected to be and nowhere I tried to be.”