‘Do you wish you were a real pilot?’ — Comedian grills her F-35 pilot fiancé in hilarious interview

A comedian named Caroline Kennedy asked her fiancé, an Air Force F-35 pilot, all the fighter pilot questions the rest of us are too afraid to think about asking. 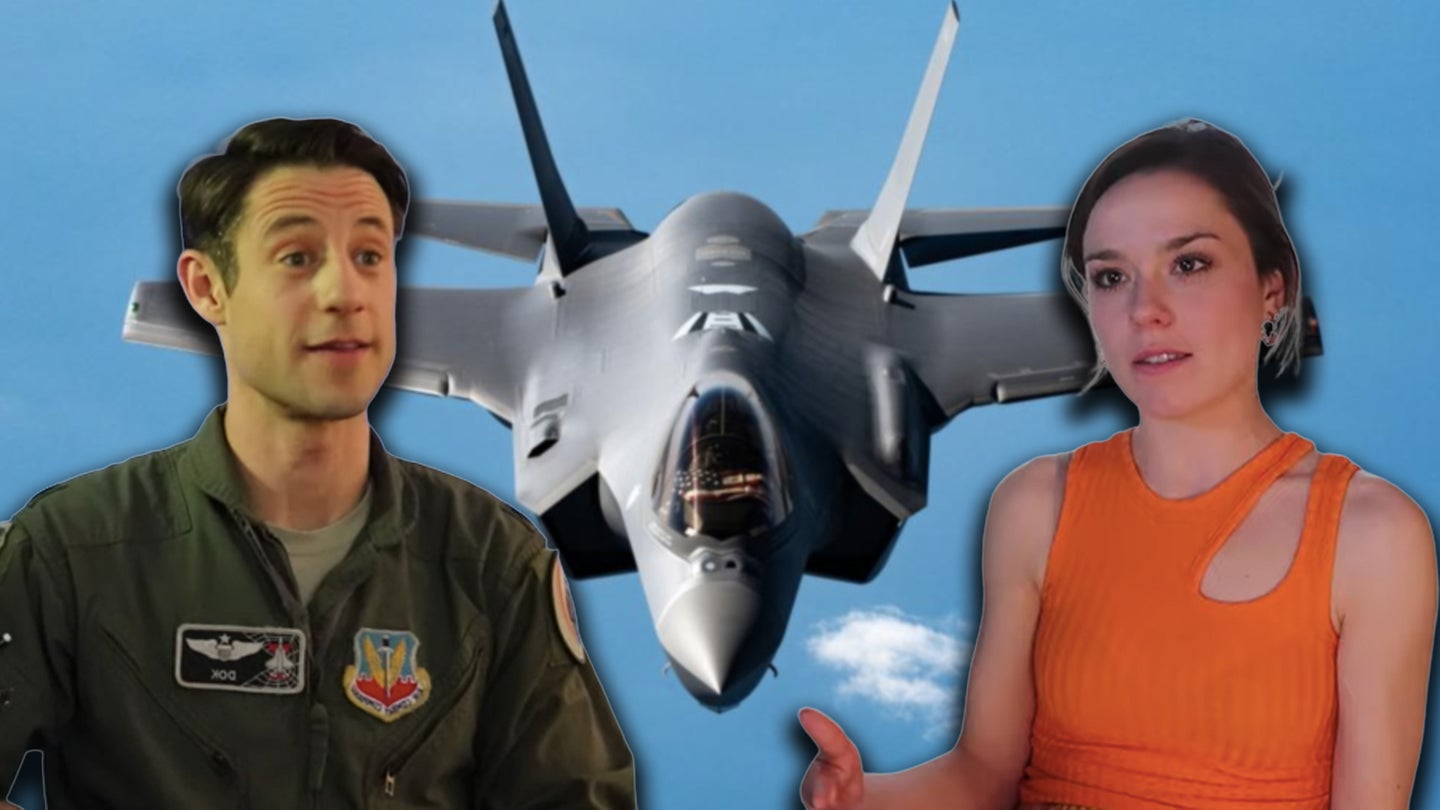 A comedian named Caroline Kennedy asked her fiancé, an Air Force F-35 pilot, all the fighter pilot questions the rest of us are too afraid to think about. (Task & Purpose photo illustration).
SHARE

When I grow up, I want to be as good at asking fighter pilots questions as the comedian Caroline Kennedy, who peppered an Air Force F-35 pilot with questions about military life that bounced between absurd, insulting, and awkward in an amazing 15-minute video she posted to YouTube earlier this summer.

“Do you think that you have to be a narcissist to be a fighter pilot, or is that unique to you?” Kennedy asked her fiancé, the F-35 pilot, in the satirical video.

“That’s really insulting,” said the pilot, Lt. Col. Jondavid ‘Dok’ Hertzel. “In the Air Force we actually really value humility and we try and teach that. It’s kind of an important character trait.”

“Well I’m surprised they haven’t kicked you out.”

There are plenty of similar exchanges throughout the video that poke fun at not only the myth of the swaggering fighter plot seen in movies like Top Gun, but also the types of interviews with fighter pilots that you see all over the internet, including at Task & Purpose.

“Does it hurt your feelings that Tom Cruise, who’s barely a fighter pilot … that he gets to fly more intense, cool missions than you do, and you’re a full-time guy?” Kennedy asked.

Speaking of Top Gun, the recent release of its sequel, Top Gun: Maverick was part of what inspired Kennedy to make her video.

“I’m a comedian, so I’m always mining pop culture for content inspiration,” she told Task & Purpose. When the new movie came out, “I figured it’d be a good time to interview a real fighter pilot (and lucky for me, I’m engaged to the one you see in this video).”

Satirical interviews make up Kennedy’s favorite genre of comedy, so she had famously awkward shows such as Between Two Ferns, Ziwe, Da Ali G Show, Borat, Chicken Shop Date, Caleb Pressley and more in mind as she scripted her side of the interview with Hertzel. By the way, the pilot was kept in the dark about Kennedy’s plan, so he had no idea what he was walking into.

“I think watching an interviewee be confronted with some unexpected form of intense ignorance is awkward in the most hilarious way,” Kennedy said. “I love the genre and have been developing my own version/comedic character for quite a while. This was my first official go!”

The satirical interview genre is a refreshing change of pace from the waterfall of ‘fighter pilot reacts’ videos saturating YouTube these days (or at least saturating my feed). In those videos, military pilots break down this or that flying scene from Top Gun or Stealth or Dunkirk or similar movies. Kennedy’s interview takes a similar premise and adapts it into something a little more … creative.

“Yeah, I am an officer in the Air Force,” Hertzel said.

“You have people calling you sir?” asked Kennedy in her video.

“Okay does it give you sort of a half-chub, when people call you sir?”

“I … don’t think that’s appropriate,” the pilot said, followed shortly afterward by “are you sure you’re a real reporter?”

This situation is very familiar to Task & Purpose reporters, some of whom have found themselves questioning their life choices while asking government officials and employees things like whether an Army major getting drugged and bitten by Polish strippers would affect the military’s footprint in that country; what do pilots say when they pee in the cockpit, and whether the Space Force will fight aliens. There’s no shortage of strange questions that need asking, and we salute Kennedy for having the courage to go find the answers. On the other side of the coin, we also salute Hertzel for rolling with it.

“I have to thank Dok for being such a great sport about this interview,” Kennedy said. “He didn’t know what I had planned but handled himself with class, unsurprisingly.”

Even so, there was one moment that Kennedy and Hertzel had to re-record because Kennedy broke character. It was the moment when Kennedy asked Hertzel if orphans should be allowed to fly F-35s (watch the video, it makes much more nonsensical sense in context).

“I couldn’t get that line out without laughing at the stupidity of it,” Kennedy said.

Kennedy’s been doing this a while though, and her lifelong effort of playing practical jokes and her method acting training makes keeping a straight face a bit easier.

“You go so deep into character that part of you believes everything you’re saying,” she said.

It is much more difficult to keep a straight face as a viewer, especially one who takes for granted many of the aspects of military life she pokes fun at. Even velcro, a universal military adhesive, was not safe.

“Babies … can’t tie their shoes, so you get a tennis shoe with velcro,” Kennedy said in the video, pointing out the amount of velcro on her fiancé’s flight suit. Keep in mind that one of the velcro patches on his flight suit is from Weapons School, so this guy is a bona fide expert F-35 pilot who’s toiled for years to be one of the best on the planet when it comes to flying a bomb-dropping multi-million dollar government asset. On top of that, Hertzel is a recipient of the prestigious and competitive Robbie Risner award for making “the greatest combat impact,” in his first year after graduating the school, according to an Air Force news release. But how did he do under fire from his fiancée?

“Does your uniform having velcro … I’m not trying to insult the military, but is that because you guys need some help putting on your uniforms in the morning?” the comedian asked.

“I wouldn’t say it’s related to … that,” the pilot answered.

Jokes aside, Kennedy was dead serious about one thing: her appreciation of Hertzel and his fellow service members across the military.

“I hope people know that this video is absolutely, 100% satire and I have the utmost respect for our service members and everything they sacrifice for our country,” she said.