The former Secretary of the Department of Veterans Affairs thinks that the VA needs to start researching medical marijuana. Not in a bit. Not soon. Right goddamn now. 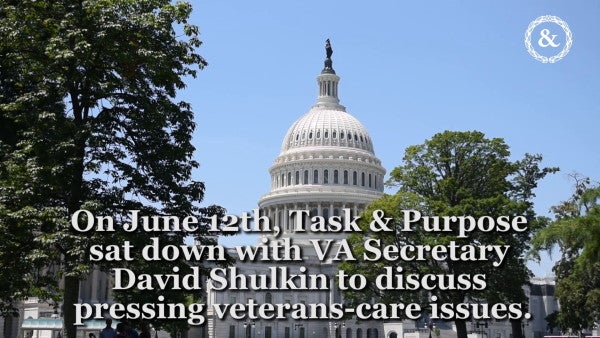 The former Secretary of the Department of Veterans Affairs thinks that the VA needs to start researching medical marijuana. Not in a bit. Not soon. Right goddamn now.

Task & Purpose had a chance to speak with David Shulkin ahead of the release of his new book: It Shouldn't Be This Hard To Serve Your Country, which comes out on Oct. 22.

In it will be a play-by-play of what it's like to run the Veterans Health Administration, which Shulkin did as the department's undersecretary for health; before taking on the post of VA chief; which was followed by a media frenzy fixated on accusations of misused funds during a taxpayer-funded trip to Europe.

What came next was months of nearly round-the-clock coverage looking into rumors, allegations, and outright claims — some from Shulkin, himself — that nefarious actors were trying to dismantle the VA by ushering it toward privatization, and that the secretary was being singled out because he refused to play ball. Meanwhile, others argued that White House appointees were simply trying to enact the president's agenda by expanding care to veterans through the private sector, and were growing impatient with a cabinet member who didn't want to follow the playbook.

All of which ended when Shulkin was abruptly fired in March 2018 by President Donald Trump. And that's all we're going to say about that, in this article at least.

Because it's not often that you get to chat with the former head of the largest medical network in the country, and ask him point blank if he thinks the Department of Veterans Affairs should be leading the charge on government-run research into medical marijuana. Especially now that there's no pressure from Pennsylvania Ave., or the need to toe the lines between the current administration's stance on weed, and the department's history of providing hazy and ambiguous guidelines when it comes to veterans' state-legal medical marijuana use.

So we asked. Here's what he said.

Task & Purpose: Do you think the VA should be researching medical marijuana? And do you think there's a time in the near-future where the department might actually prescribe it to veteran patients?

David Shulkin: I think the time is now. I believe that the VA should be involved in research on anything that could potentially help veterans and improve their health and well-being.

In particular, with the VA's focus on suicide as the top priority, people just don't take their lives because of no reason. They take their lives, often because of issues related to chronic pain, depression, substance abuse, and there is growing evidence that medical marijuana — I'm not talking about recreational marijuana — but properly prescribed, may have some real benefits in anxiety improvement, in pain management, and potentially, in the issue of substance abuse.

And therefore, I believe it's extremely appropriate for VA to be researching and developing therapies that can help veterans, particularly in areas where we don't have enough good therapies or answers.

T&P: Now, won't there be some pretty big obstacles to this, having the federal government research a controlled substance? (Note: Cannabis is classified as a Schedule 1 drug by the Food and Drug Administration, which are defined as drugs with no currently accepted medical use and a high potential for abuse.)

DS: Marijuana is a controlled substance, so therefore the challenge of doing research with the regulations, and the hoops that you have to go through, are making it too difficult to do for many of the researchers.

But, I do think that the way forward is a legislative solution, much of what VA responds to are changes in the law, where medical research for veterans in this area could be streamlined and clarity around what regulations and rules need to be followed to be able to do this research, as well as guidance about the type of research that can and should be done, which reports back to Congress.

So i think that's the way which, I believe this should be approached. I have no indication to believe that the president wouldn't be supportive of work that would help veterans improve their functioning and health.