The VA May Soon Be Forced Into Medical Marijuana Research. Finally

When it comes to the subject of medical weed research, or even whether it’s okay for a vet and physician... 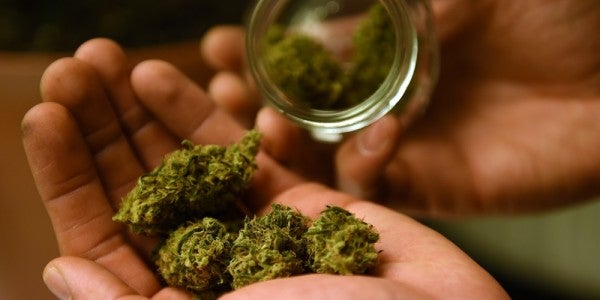 When it comes to the subject of medical weed research, or even whether it’s okay for a vet and physician to discuss medicating with herb, the Department of Veterans Affairs has a tendency of ducking action in favor of citing hazy policy, and vague restrictions.

A few recent examples: In December 2017, the VA announced new policy guidelines allowing patients to discuss their state-legal medical pot use with their doctors. But prior to that, it was already allowed, it just wasn’t widely broadcast — to care providers or patients — an issue Task & Purpose reported on previously.

As for what training physicians would get on medical pot now that they could discuss it with veteran patients; in a Jan. 17 email to T&P;, the department cited a May 31, 2017 statement saying the VA could not prescribe cannabis, but made no mention of educating care providers on its state-legal use.

Then, there’s the back and forth (and back again) between House Democrats calling on then-Secretary David Shulkin to direct the VA to conduct cannabis research, or explain why the department could not back a proposal that has overwhelming support from military veterans and their families. Shulkin’s Dec. 21 response cited bureaucratic red tape, a lack of congressional authority, and cumbersome interagency coordination as barriers to research.

Which gets us to where we are now: A congressional Republican and a Democrat are introducing a bill that states the VA can conduct research into the efficacy of medical marijuana as a treatment for veterans diagnosed with chronic pain, post-traumatic stress disorder, and other conditions deemed appropriate by the secretary.

Put it another way: No more blaming red tape. If this bill passes, the VA can research pot.

Introduced April 17, the bipartisan VA Medicinal Cannabis Research Act of 2018 is being spearheaded by Rep. Phil Roe of Tennessee, Republican chairman of the House Committee on Veterans Affairs, and Rep. Tim Walz of Minnesota, the panel’s ranking Democrat. Sen. Jon Tester of Montana, the top Democrat on the Senate Veteran Affairs Committee, is expected to announce companion legislation, though it’s unclear whether the Senate bill will have similar bipartisan support.

It’s unclear where the nominee for secretary, White House physician Ronny Jackson, stands on the issue. However, the law is less focused on forcing a VA chief’s hand, and more about trimming back the bureaucratic cover that’s been used to duck the issue in the past.

“Research on the effects of medical marijuana are incredibly limited right now at the federal level,” Kayda Keleher, an associate director with Veterans of Foreign of Wars, told Task & Purpose. “While the FDA has the ability to authorize the research, there are a lot of barriers to getting the approval and obtaining usable marijuana. This has really put the research on slow motion.”

Although more than half of all states allow some form of legal marijuana use, under federal law cannabis remains a schedule 1 substance — those drugs deemed to have no currently accepted medical use and a high potential for abuse.

“With this study we would be in a much better position to understand medical marijuana, what it effects, how it affects people in different ways and what types of interactions it has with FDA approved pharmaceuticals,” Keleher said.

Under the proposed bill, VA research would involve full plants and extracts; include at least three different strains of weed “with significant variants in phenotypic traits and various ratios of tetrahydrocannabinol and cannabidiol in chemical composition,” according to the bill; and cover different delivery methods, from topicals, to ingestibles, and both combustibile and non-combustible inhalation. Additionally, any data collected or used for the purpose of researching medical cannabis would have to be preserved.

If passed, the VA will have six months to submit a plan for the new policy to the House and Senate Veterans Affairs Committees, and the bill requires periodic reports be submitted annually, at the very least.

“As a physician, I am keenly aware of the need to look for opioid alternatives to treat patients’ chronic pain,” Roe said in a statement. “Until we have sound science behind whether or not medical cannabis is an effective treatment, we should not move forward with prescribing it, and I believe VA is uniquely equipped to conduct this important research.”

Medical cannabis research has widespread support within the military veteran community, with 92% of veterans saying they support medical marijuana research and 22% saying they currently use the drug as a safer alternative to a pill-heavy regimen, according to a Nov. 1, 2017 American Legion survey.

“That is why I am so proud to introduce this legislation,” Walz said in a statement. “Simply put, there is no department or organization better suited to conduct this critically important research than VA, and there will never be a better time to act.”

The drug’s prevalence among veterans and the department's decision to give patients the all-clear to discuss its medical use with their docs, places increased pressure on the federal government to conduct a comprehensive study of cannabis' efficacy for VA patients’ ailments.

“If veterans are able to legally access marijuana at the state level, then their doctors at VA should understand the medical implications of that,” Keleher said, adding that with more than nine million veterans receiving medical care through the VA, “we already know they are overrepresented in areas of PTSD, chronic pain, certain types of cancer and more.”

Assuming the VA Medicinal Cannabis Research Act of 2018 passes, the VA’s Office of Research and Development, which has conducted industry-leading research and development since 1925, would be tapped to spearhead the department’s medical cannabis research.

“When it comes to medical marijuana, veterans are the perfect population to use as participants,” Keleher said, “We also know that veterans overwhelmingly support advancing research of medical marijuana, so there’s a willingness to participate. And in my opinion, who else is more deserving?”