Navy Rear Adm. Ronny Jackson’s promotion from White House physician to Secretary of Veterans Affairs may be in jeopardy due... 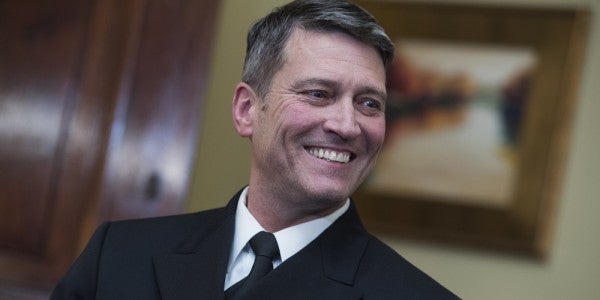 Amid a national opioid crisisbrought on by the overprescribing of painkillers, Veterans Health Administration medical facilities have indiscriminately handed out such powerful drugs to patients struggling with chronic pain — 9 million patients annually. According to VA data obtained by CBS News in 2014, narcotics prescriptions skyrocketed 259 percent since the early years of the Global War on Terror, eclipsing the meager 29 percent increase in actual patients during the same period. (Vets receiving private medical treatment are at even more risk of developing an addiction to their medication, but nobody ever said the VA was perfect.)

But to be fair, the VA was just acting on the advice of OxyContin manufactures like Purdue Pharma that, according to documentsmade public by Newsweek in October 2017, influenced the VA and DoD guidelines to minimize the addictive properties of opioids and explicitly targeted combat veterans. And honestly who better to trust about the safety of a drug than the very people making billions of dollars by pushing it to the public. Why would they ever lie?

Naturally, the VA responded to the tide of addictions it had inadvertently caused by cutting people off cold turkey: VA datareleased in January 2018 revealed that 99 percent of facilities between 2012 and 2017 saw significant decreases in their opiate prescription rates.