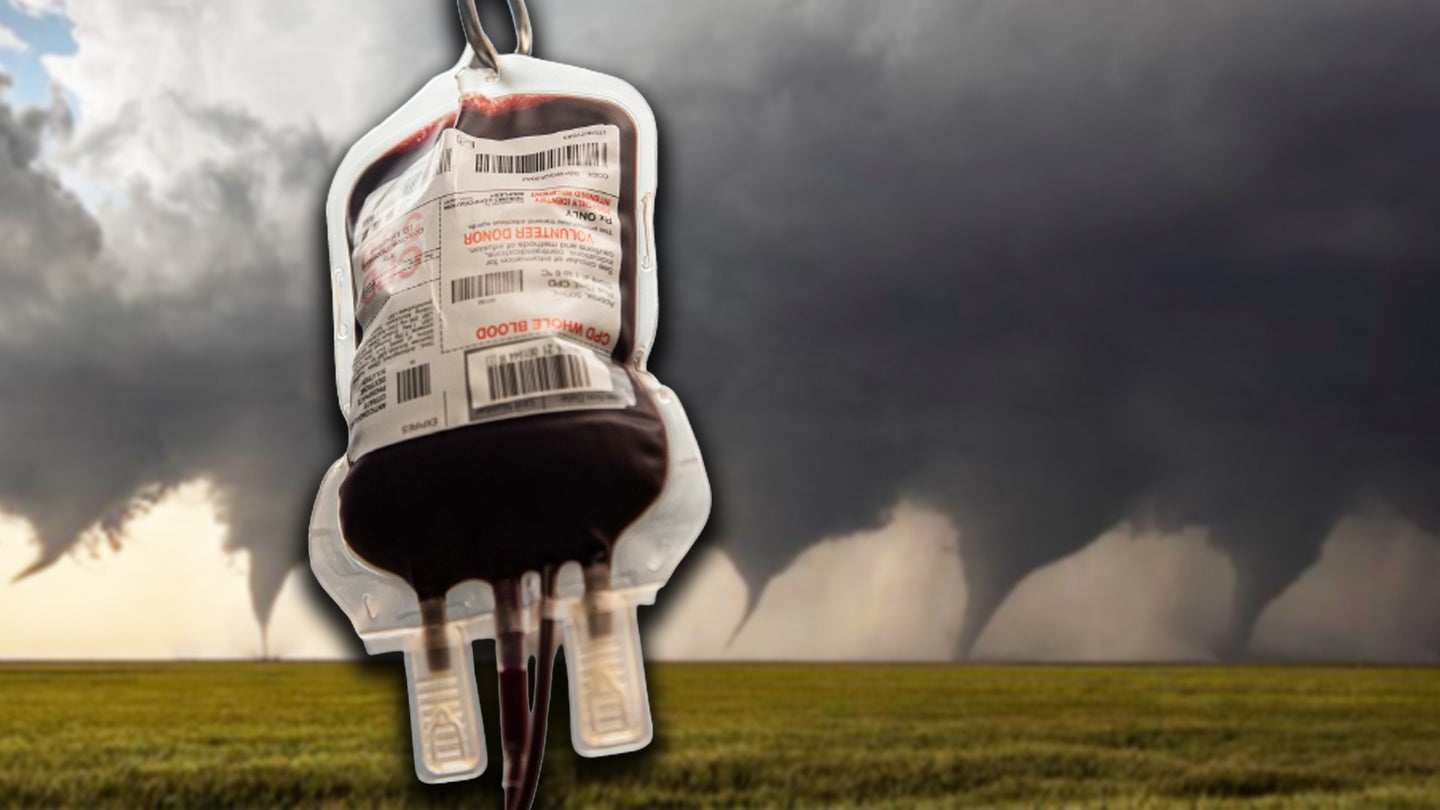 By design, military exercises are meant to push participants to find creative solutions to any and every problem imaginable. Enter: Bloodnado 2022.

The exercise took place on Feb. 3 at Naval Medical Center Camp Lejeune in North Carolina, where participants simulated a tornado cutting off electrical power to the base medical center. That meant the base blood bank, which requires refrigeration to keep donated blood safe to use for medical procedures, had to move its equipment to another location in the medical center. Hence the name, bloodnado.

“We are preparing the blood bank for continuous missions,” Mark Starnes, the emergency manager for the medical center at Camp Lejeune, said in a Navy press release. “If they had an incident that would make their laboratory unusable or parts of the hospital unusable, they could pick up and move to another section of the medical center to continue the mission in an emergency until we can figure out how to bring the laboratory back to normal” or find another lab to use.

The press release did not reveal many details about how participants moved the blood bank equipment under pressure, but one sailor did speak to the need to plan for contingencies so that they’re ready if an actual “bloodnado” ever hits.

“If you run a drill and repeat the drill, you gain muscle memory,” said Hospital Corpsman 2nd Class Matthew Jeffers, the hospital’s assistant emergency manager. “In terms of natural disaster drills, planning and learning from our mistakes — it’s a constant thing. We are planning for active shooters, mass casualties, natural disasters, hurricanes and tornadoes.”

Now they can add “bloodnado” to that list. But Thursday’s exercise was only one among several recent Department of Defense initiatives to ensure service members have a fresh supply of blood available for emergency use. In 2020, the Air Force jettisoned a cooler full of blood from a small C-145 transport plane over Eglin Air Force Base in Florida as part of Operation Blood Rain, a study designed “to determine if fresh blood could withstand an airdrop to combat medics in austere environments,” the 96th Test Wing said at the time.

The goal of the research was to determine whether drones could potentially deliver critical blood supplies to combat medics downrange, thus extending the so-called “golden hour” — a window of opportunity for medics trying to save troops’ lives amid traumatic battlefield injuries.  The Army seemed to be working on a similar project in August, when researchers and tech companies demonstrated an unmanned aircraft delivering blood to a landing zone in Fort Pickett, Virginia.

All on its own, the drone flew over the landing zone, scanned the terrain for a suitable place to touch down, and then came to a smooth stop in the field. If the landing zone was too cluttered to land, the drone just dropped the delivery off from a low-altitude hover, or released transport pods via parachute.

“This project allowed us to demonstrate the utility of autonomous, safe landing in complex, unstructured environments,” said Sanjiv Singh, CEO of Near Earth, one of the tech companies involved in the project. “It is especially gratifying to speak to end users who can benefit from the life-saving applications that are now possible through this innovative program.”

Innovation and life-saving skills aside, “Bloodnado 2022” is also the latest in a long line of creative names for exercises and operations that service members have participated in over the years. For example, there’s “Jukebox Lotus,” the name for the crisis response to the Sept. 2012 terror attack against the diplomatic compound in Benghazi, Libya; “Justified Seamount,” which refers to counter-piracy operations off the east African coast; and “Oaken Sonnet,” which refers to contingency operations in South Sudan.

But it was the Greatest Generation who came up with some of the best names for military ops. Amid the vicious fighting of World War II, Allied planners had the time to come up with headscratchers like “Operation Toenails,” for the campaign in New Georgia in the South Pacific; “Operation Dracula,” which was the plan to invade Burma; and “Operation LUSTY,” which was actually an acronym for Luftwaffe Secret Technology, and referred to U.S. Army plans to nab German aviation research near the end of the war.

Whether the Navy Medical Center at Camp Lejeune might up the ante and implement “Operation Sharknado XXL” is uncertain, but with sharks often appearing off the coast of North Carolina, let’s not put it past them. After all, readiness is everything.