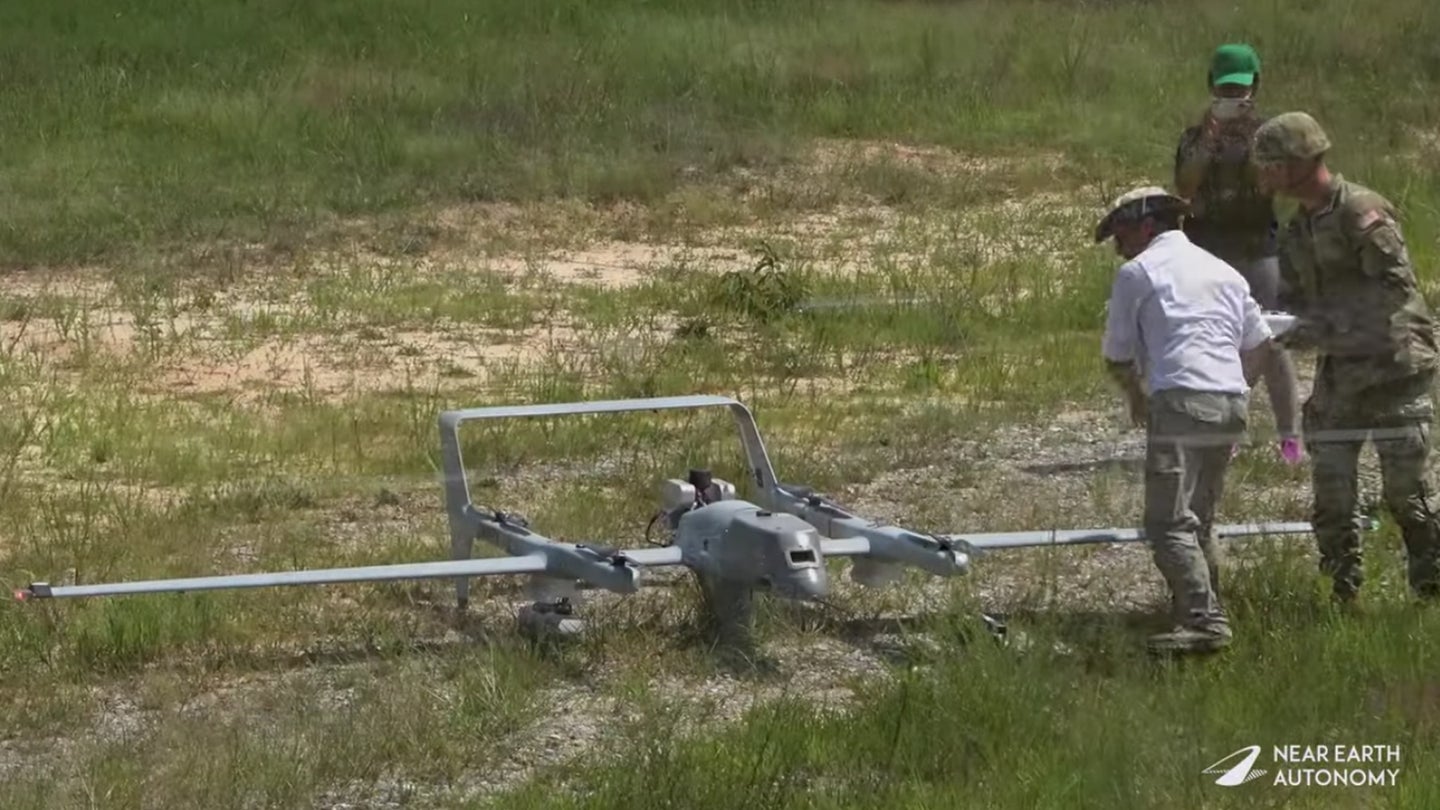 Researchers test out using an autonomous drone to deliver blood supplies to troops in the field. August, 2021, Fort Pickett, Virginia (Screenshot via Near Earth Autonomy).
SHARE

What if vampires delivered blood instead of taking it away? That seems to be the key concept at work behind the Army’s latest idea to deliver life-saving blood to medics in the field via autonomous drones.

In August, a team of Army researchers worked with tech companies Near Earth Autonomy and L3Harris Technologies to demonstrate an unmanned aircraft delivering whole blood to a landing zone in Fort Pickett, Virginia. It was not clear if the drone was actually carrying blood, but the drone nonetheless showed off its ability to fly over the LZ, scan the terrain for a suitable place to touch down and then come to a smooth stop in the field. If the landing zone was too cluttered to land, the drone just dropped the delivery off from a low-altitude hover, or released transport pods via parachute.

The new tech could be a big step forward for battlefield first aid, where medics and corpsmen fight against the clock to get their patients the care they need with the limited resources they have in the field. Delivering blood via drone presents key advantages because it would ramp up the amount of resources those medics have available without putting human pilots at risk, should the troops in the field be isolated by hostile fire or poor weather conditions.

“Near Earth and L3Harris have … smartly integrated their aircraft autonomy and blood storage system with a capable [unmanned aerial system], demonstrating the ability to support field care, when immediate patient evacuation is not possible, through long-range delivery and recovery of critical supplies without requiring any forward infrastructure,” said Nathan Fisher, Chief of the medical robotic and autonomous systems division at the Army’s Telemedicine and Advanced Technology Research Center, in an L3Harris press release on Tuesday.

In the August exercise, the team used an FVR-90 drone, which can take off and land vertically like a helicopter, fly 12 to 18 hours and carry up to 22 pounds of payload in its nose. The L3Harris product also carries a suite of sensors to help it determine where to land near medics in need.

“This project allowed us to demonstrate the utility of autonomous, safe landing in complex, unstructured environments,” said Sanjiv Singh, CEO of Near Earth. “It is especially gratifying to speak to end users who can benefit from the life-saving applications that are now possible through this innovative program.”

This isn’t the first time the military has tried new ways of delivering blood supplies to troops in the field. In 2020, an Air Force C-145A dropped a cooler full of blood over Eglin Air Force Base, Florida, as part of Operation Blood Rain, a study designed “to determine if fresh blood could withstand an airdrop to combat medics in austere environments,” according to the 96th Test Wing.

The end goal of that research was to determine whether drones could potentially deliver critical blood supplies to combat medics downrange, thus extending the so-called “golden hour” window of opportunity for medics trying to save troops’ lives amid traumatic battlefield injuries. The blood landed “safely,” and the Eglin lab team concluded that “there was no breakdown or disintegration in the red blood cells of the airdropped blood samples,” according to the release.

Still, a drone, especially an autonomous drone, could have advantages over manned aircraft when it comes to delivering blood supplies. Since it does not require a pilot on board, the drone is more flexible to deliver blood when and where it’s needed, wrote the research group RAND in a 2019 paper on drones used for blood delivery. That helps because blood expires after a certain point, which means the window for travel is smaller than a manned aircraft may be able to accomodate.

“With regard to the military, autonomous [unmanned aerial vehicles] could be used to quickly deliver emergency supplies on-demand during combat operations, such as in support of medical response to a mass-casualty event,” RAND wrote. “With regard to civilian use, supplies could be flown into difficult-to-reach locations that may have been denied by a natural disaster or
other catastrophic event.”

RAND saw two ways in which drones could benefit the military medical system. First, the drones could be used for emergency delivery to badly-hurt troops on the front lines. Those drones could be small and fast in order to deliver small batches of blood to a handful of patients in urgent need. But there’s also a second military use for blood-delivering drones: whereby the aircraft fly regular resupply of medical treatment facilities.

“For logistical resupply of MTFs, UAVs are flown continuously or on-demand from a central blood storage facility to more remote
MTFs that lack organic refrigeration capability,” RAND wrote. These drones may be slower but could carry larger payloads of blood or other medical supplies.

Even without the blood-delivery aspect, the autonomous landing capability of the FVR-90 could represent a big step forward for drone use in the military. For example, when the Air Force flies MQ-9 Reaper drones over the Middle East from cockpits half-a-world-away in Nevada or New Mexico, there is enough of a time delay between the two locations that the U.S.-based pilots don’t take off and land the drones themselves. Instead, local crews at MQ-9 installations in the Middle East take over piloting the drone for the minute adjustments needed to make a smooth landing.

“Previously, MQ-9s could only land and take off if there was a local crew to ‘line-of-sight’ link with the aircraft,” Air Force Lt. Col. Nathaniel Totten, deputy commander of the 49th Operations Group, said in July after the Air Force tested an automated landing and take off system for the Reaper. The system would eliminate the need for a local crew to control the take-off and landing process.

“With this new capability, an MQ-9 can theoretically land anywhere there is a runway large enough,” Totten added.

Maj. Dustin Barbour, 49th Wing commander’s action group director, said it is uncertain how soon automated takeoffs and landings would “become the dominant form of takeoff and landing,” but if it does, it would give the Reaper greater range to take off and land at any base, without as many airmen or contractors needed to guide the aircraft in.

The same goes for this potential new flying blood bank being tested by L3Harris and Near Earth Autonomy. The U.S. military spends a lot of time these days thinking about how to fight China in a possible war over the vast distances of the Pacific Ocean, where American troops may not have the long supply chains, air supremacy and sprawling support bases that they have become accustomed to during the Global War on Terror. The Air Force in particular is trying to decrease the number of people it needs to run airpower missions, so if the medical support drone can land itself, then all the better.