You done messed up. 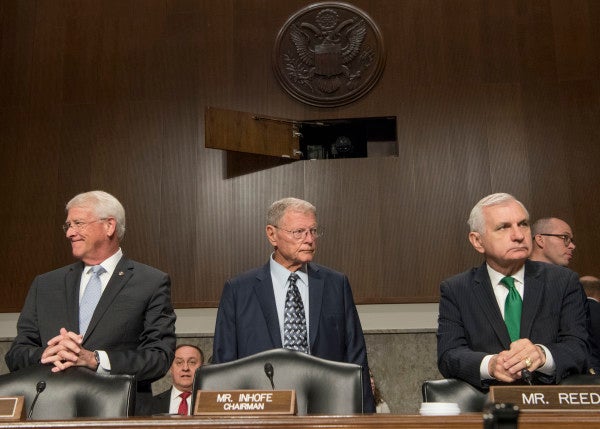 You done messed up, military leaders.

Sens. Jim Inhofe (R-Okla.) and Jack Reed (D-R.I.) — chairman and ranking member of the committee, respectively — said in a joint statement on Wednesday night that the Tenant Bill of Rights, released by Defense Secretary Mark Esper and signed by each service secretary, “does not go far enough to protect our military families,” calling it “yet another missed opportunity.”

Congress and the DoD have been working on the Tenant Bill of Rights — which is meant to give military families more power as they navigate the privatized housing system — for months now. The measure was first unveiled almost one year ago, in March 2019.

But the final document that the Pentagon released on Wednesday didn’t include three critical points — allowing tenants access to the maintenance history of their home, processes for dispute resolution, and allowing tenants to withhold rent until their issues are resolved.

All three of those were included in Congress’ version in the National Defense Authorization Act signed into law in December.

Inhofe and Reed told the military leaders that they misled families by putting those provisions in earlier drafts only to not include them in the final version.

“The FY20 National Defense Authorization Act was clear—this Bill of Rights should include three basic items: the right to dispute resolution, the ability to withhold rent, and access to a home’s maintenance history,” Inhofe and Reed’s statement said. “Additionally, the Department led our military families to believe these protections were in the Bill of Rights when they circulated a draft for comment as early as May 2019 with those items included.

“This goes directly against the promises made by the Department and the housing companies that they would work to regain the trust of our military families.”

On Wednesday, Esper was asked about this very problem during a House Armed Services Committee hearing. He told lawmakers that the Pentagon needs help from Congress on filling in those holes.

“What I don’t want to do is promise a right that I can’t deliver on,” he said.

While Congress and the Pentagon scramble to sort through their issues, service members and their loved ones are facing the real-life consequences of failed oversight and a complete breakdown in accountability. Families have reported issues from rodent infestations to rampant mold in their homes, which has led to children getting sick. Even worse, families have faced legal pressure from companies to stay quiet if they want to get their problems addressed.

This issue is far from resolved, as Inhofe and Reed acknowledge, and military leaders can expect to once again find themselves back in front of lawmakers explaining their decisions in the near future.

“[G]etting this done right is essential — and it needs to be completed quickly,” the two senators said. “We are watching and waiting.”