'I come to this new role as a civilian leader.' 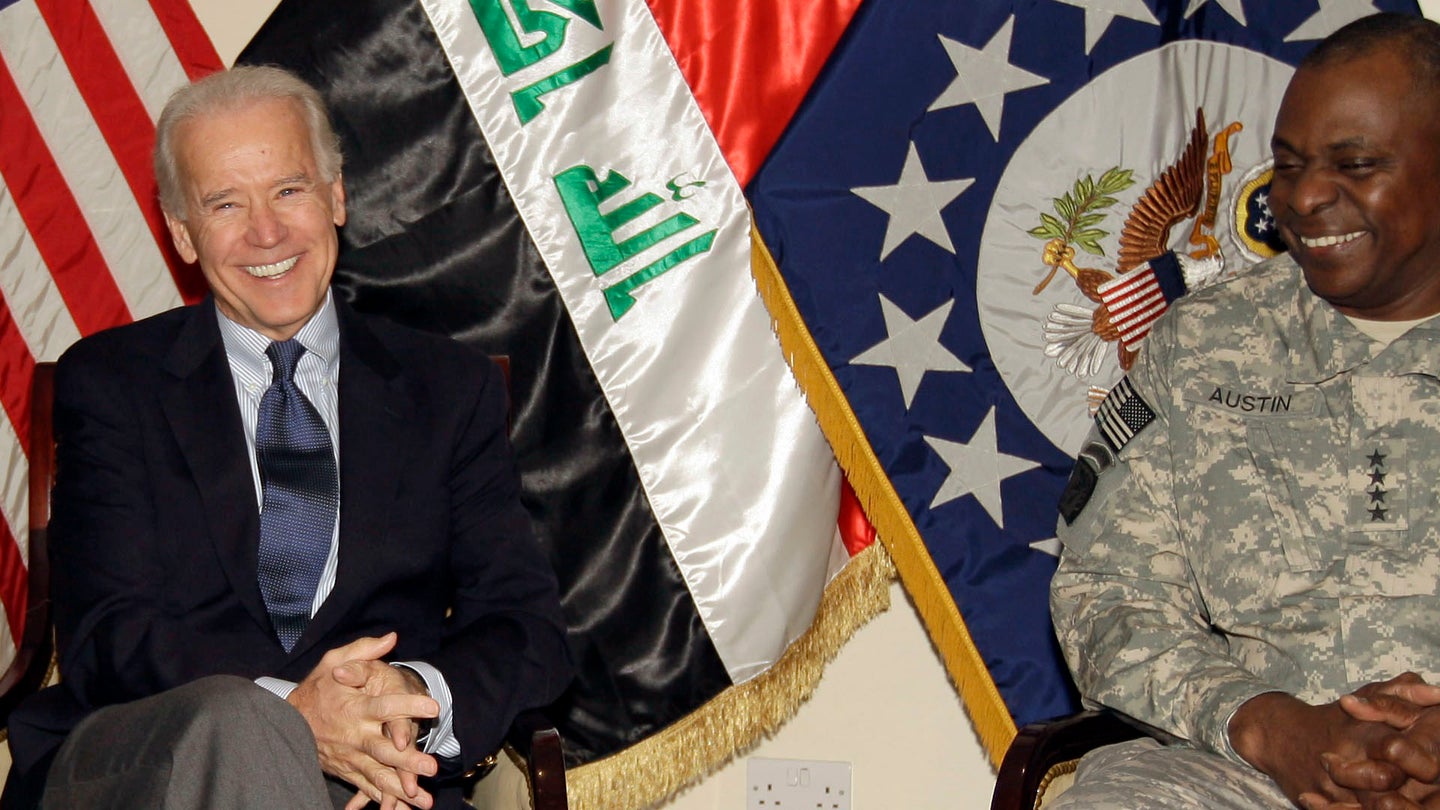 U.S. Vice President Joe Biden, left, is seen with Gen. Lloyd Austin, the top U.S. commander in Iraq, in Baghdad, Iraq, Tuesday, Nov. 29, 2011. Biden arrived on a surprise visit to Iraq late Tuesday in a trip designed to chart a new relationship between the two countries after all American forces have left the country in just over a month. (AP Photo/Khalid Mohammed).
SHARE

President-elect Joe Biden on Wednesday introduced retired Gen. Lloyd Austin, his nominee to serve as defense secretary, as “the right person for this job at the right moment.”

“As a leader, Gen. Austin has always followed the advice given to him by his first platoon sergeant,” Biden said at news conference. “Here is what his platoon sergeant told him: ‘If you focus on your people, take care of them, get out in front and lead them, they’ll refuse to let you fail.’

“That’s why he’s inspired so many young people who worked for him and give their very best to live up to his example of leadership – including, for a time, a young lawyer serving a year in Iraq as a captain with his Delaware National Guard unit: My son, Beau Biden.”

Biden praised Austin for overseeing the withdrawal of all U.S. troops from Iraq in 2011, which was a major feat of logistical skill.

The president-elect also recalled when he and Austin were at the house of the U.S. ambassador for Iraq when insurgents fired rockets at Baghdad’s Green Zone.

While Biden has repeatedly praised Austin for leading the end of U.S. military operations in Iraq, just over two years later the Islamic State terrorist group captured large parts of both Iraq and Syria, the Iraqi military’s leadership collapsed and Iraqi troops melted away as a much smaller force of Islamic State fighters took the key city of Mosul.

Retired Army Gen. Raymond Thomas, who led U.S. Special Operations Command from March 2016 to March 2019, tweeted on Tuesday that it is wrong to characterize the troop withdrawal from Iraq as a success.

“Did I dream about having to go BACK to Iraq and then the added bonus of Syria 2 years later to defeat ISIS?” Thomas tweeted.

After Iraq, Austin went on to lead U.S. Central Command before retiring in 2016. If confirmed by the Senate, Austin would become the first Black man to serve as defense secretary.

In his first public remarks since his nomination was announced, Austin paid tribute to all those who came before him and made it possible for him to potentially lead the Pentagon, including Henry Ossian Flipper, the first Black man to graduate from the U.S. Military Academy at West Point, New York, in 1877.

Austin noted that both he and Flipper come from Thomasville, Georgia.

“President-elect Biden: As you mentioned, we’ve worked closely together on some close issues,” Austin said. “We’ve gotten to know each other under some intense and high pressure situations. And sir, you can expect that as secretary of defense that I will give you the same direct and unvarnished counsel that I did back then.”

The retired general also paid tribute to Beau Biden, who died of cancer in 2015, by describing the president-elect’s son as “a very special person and a true patriot and a good friend to all who knew him.”

If confirmed, leading the Defense Department would be “the honor of my lifetime,” he said.

“As secretary of defense, my priority will always, always be the men and women — military and civilian — who make up the department and their families,” Austin said.

Austin will need Congress to provide him with a waiver to a federal law which prohibits retired general officers from becoming defense secretary if they have been retired for fewer than seven years.

Former Defense Secretary Jim Mattis received such a waiver from Congress when President Donald Trump nominated him for the job in January 2017.

Lawmakers have had mixed reactions about having to consider a second waiver for a retired general officer within four years.

In 2017, Sen. Jack Reed (D-RI), the ranking Democrat on the Senate Armed Services Committee, vowed that he would “not support a waiver for future nominees,” but on Tuesday he issued a statement saying he would carefully review Austin’s nomination.

Rep. Adam Smith (D-Wash.), chair of the House Armed Services Committee, called Austin’s nomination “historic” and said he is confident that Austin would make an excellent defense secretary, but he is also concerned about yet another recently retired general officer running the Pentagon.

“Civilian control of the military is an important principle in our Constitution,” Smith said in a statement on Tuesday. “General Austin should meet with the members of the House Armed Services Committee so they can ask questions about civilian control of the military, and to be assured that General Austin is committed to this important principle and understands what he will have to do to make sure it is upheld during his tenure as Secretary of Defense.”

On Wednesday, Biden said that in the years he has worked with Austin, he has seen the now retired general “faithfully carry out the orders of the civilian leadership of this nation.”

Biden added he respects the law that requires general officers to be retired for at least seven years before they can become defense secretaries.

”I would not be asking for this exception if I did not believe this moment in our history didn’t call for it –it does call for it – and if I didn’t have the faith I have in Lloyd Austin to ask for it.”

For his part, Austin said that when he hung up his uniform for the last time, he went from being “Gen. Lloyd Austin to Lloyd Austin.”

“It is an important distinction and one that I make with utmost seriousness and sincerity,” Austin said. “And so I come to this new role as a civilian leader – with military experience to be sure; but also with a deep appreciation and reverence for the prevailing wisdom of civilian control of our the military.”