Who Is Ash Carter And Why Does He Make Sense As Defense Secretary?

President Barack Obama announced on Friday that former Deputy Secretary of Defense Ash Carter is the White House’s choice to... 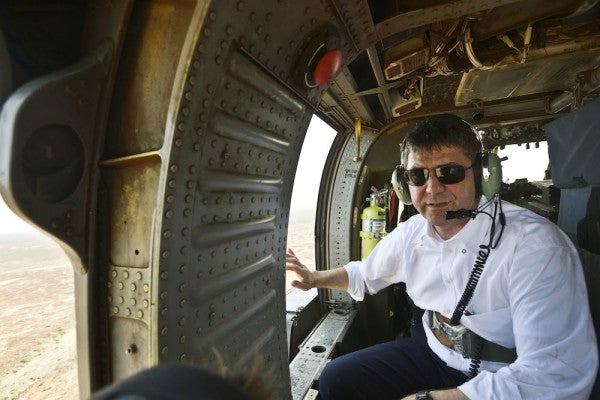 President Barack Obama announced on Friday that former Deputy Secretary of Defense Ash Carter is the White House’s choice to lead the Defense Department following Chuck Hagel’s abrupt resignation on Nov. 24. Hagel’s controversial exit, which he insists is mutual, comes as Obama seeks to shake up his national security team amid a wave of international crises.

Carter, an Oxford-trained physicist, nuclear weapons expert, and budget guru who has a long history at the Pentagon, is facing one of the most thankless jobs in Washington. But Obama administration hopes that a man with the reputation as always being the smartest guy in the room is up to the task.

It is clear that Carter is a wonk’s wonk, and well suited to navigate the Defense Department’s sprawling bureaucracy. He knows the defense industry and Congress, and few are better suited to understand the technical aspects of defense systems and policy. “His career has sort of prepared him perfectly for this kind of a moment,” Brookings defense analyst Michael O’Hanlon told CNN. “On paper and in terms of his resume and preparation you probably couldn’t do much better.”

However, unlike Hagel, Carter never served in the military, and may lack understanding of the concerns of rank and file soldiers. Hagel, who is the only former enlisted man to serve as secretary, was a decorated infantry sergeant in Vietnam, giving him credibility among regular soldiers that a policy expert like Carter cannot replicate.

But a secretary of defense doesn’t lead troops in the field. He must manage the most monolithic federal department in Washington, stand up to Capitol Hill and a micromanaging administration, as well as implement policy. Carter may never have been on point in the weeds like Hagel has, but he knows how to navigate a very different kind of jungle.

Facing shrinking budgets and a multitude of commitments across the globe, along with a deeply dysfunctional acquisitions process, a technocrat that can hit the ground running may be just what the job needs.

Carter will likely face little resistance from Congress, in stark contrast to the grilling Hagel took during his own confirmation hearings. Sen. John McCain, who is expected to chair the Senate Armed Services Committee, along with Carl Levin and Jim Inhofe, both said Carter is eminently qualified for the job. “I support it very strongly. I’ve known him a long time… I can’t imagine there will be significant opposition,” Inhofe told the National Journal.

His confirmation hearings will most likely focus on the president’s defense policies, not Carter himself. McCain told ABC news, “He’s not controversial. He’s qualified and he’s the last man standing, but he’s been around long enough to know he will have little or no voice in the crucial decisions on national security.”

Carter has held a number of posts at the Pentagon, working in the Clinton administration to reduce the proliferation of weapons of mass destruction. He played a significant role in implementing the second iteration of the Strategic Arms Reduction Treaty with Russia and negotiations concerning the Comprehensive Nuclear-Test Ban Treaty.

As deputy secretary, he was responsible for the day-to-day management of the Defense Department’s millions of employees. He was considered for the top spot following the departure of Leon Panetta, but was passed over in favor of Chuck Hagel. While serving as deputy secretary, Carter took such a prominent role in public events that he faced some accusations of trying to upstage his boss.

In 2006, Carter called for attacking North Korea’s ballistic missile program, when that same program ultimately turned out not be nearly the imminent threat to the U.S. Carter feared at the time.

Prior to his stint as deputy secretary, Carter was undersecretary for acquisition, technology and logistics, where among other measures, he canceled the Army’s massive Future Combat System, a $200 billion battlefield networking program that was plagued with cost overruns and delays. He has criticized the Pentagon for being too slow and unwieldy in its weapons programs, taking years to deploy equipment that was needed on the battlefield immediately.

Carter retired as deputy secretary last year among discord over the federal budget, and lamented the gridlock in Congress during his resignation speech. “The turbulence surrounding the governance in Washington is having serious effects. Most seriously, it embarrasses us in front of friends and allies, and also potential opponents. A great and strong nation needs a working government.”

Hagel said of Carter’s resignation, “He possesses an unparalleled knowledge of every facet of America’s defense enterprise, having worked directly and indirectly for eleven secretaries of defense over the course of his storied career.”

Carter made it no secret he wanted the top job, and his resignation was a sign of Hagel trying to put his own mark on the department after leaning on Carter during his transition into the office. His return underscores Obama’s efforts to shake up his defense team, who has been accused by Congress of insularity and micromanagement.

The former Rhodes Scholar’s academic credentials are impressive to say the least, with a doctorate in theoretical physics from Oxford University and a bachelor’s in medieval history from Yale. He is a former director of the Center for Science and International Affairs at Harvard’s John F. Kennedy School of Government, and has held positions at MIT and Rockefeller University.

For all his qualifications, Carter was not the Obama administration's first choice. Michelle Flournoy, former under secretary of policy at DOD and co-founder of the think tank Center for a New American Security, quickly made it clear she didn’t want the job due to family concerns.

Jeh Johnson, former general counsel to DOD and currently director of Homeland Security, also refused the position, citing the fact he had been at DHS for less than a year.

Hagel is on his way out, to the regret of many enlisted personnel who valued a man who could empathize with them. But with Ash Carter, the DoD will have an experienced and highly respected hand on the tiller, which in these days of international turmoil and budget woes is exactly what the department needs.