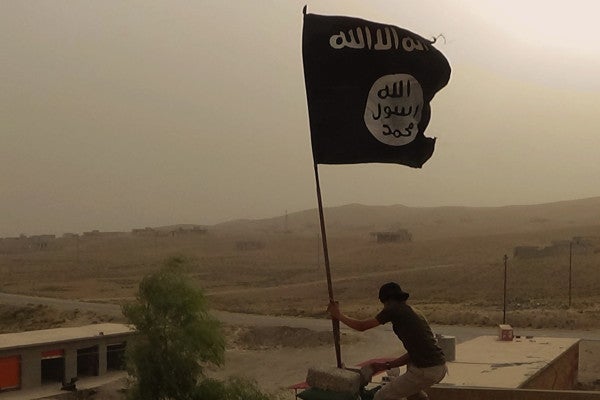 In late 2015, Secretary of Defense Ash Carter announced that a so-called Expeditionary Targeting Force comprised of elite U.S. special operations units would begin deploying to Iraq and Syria to assist in the war against ISIS. So far, that task force appears to have been instrumental in reversing the tide of the war, most notably in Ramadi, where in December U.S.-backed Iraqi forces managed to retake the city from ISIS after a five-month slog.

Now, U.S.-backed anti-ISIS forces are set to shift their attention to Mosul, a sprawling metropolis in northern Iraq that has served as the Islamic State’s chief stronghold in the country since the summer of 2014.

Most recently, the fight against ISIS centered around al-Shadadi, a town of roughly 15,000 in eastern Syria, which Kurdish and Arab forces retook over the course of several days in late February, in effect severing a key ISIS supply line between Raqqa and Mosul.

Task & Purpose spoke with Sebastiano Tomada, a veteran war photographer with Getty Images Reportage, who was embedded with the Y.P.G. Kurdish militia during the push into al-Shadadi.

His remarks offer an on-the-ground insight into the bloody fight to counter ISIS, and perhaps a glimpse into Western involvement.

Tomada told Task & Purpose that al-Shadadi, which is located 200 miles east of Raqqa, fell quickly with the help of American airstrikes. Once inside the corpse-littered town, Tomada observed the freshly destroyed remnants of a deeply entrenched ISIS force.

The center of al-Shadadi after the town was retaken from ISIS in late February.

Here’s how al-Shadadi looked to Tomada when he visited the town Feb. 19-21:

“[There were] bunkers for airstrikes, tons of Malaysian and Indonesian passports, antidotes and test tubes for nerve gas, presence of Chechen fighters and a destroyed town,” Tomada said. “[There was also] a supposed rape house with women's clothes beds, condoms, and chains.”

Related: Trumps Rhetoric On Muslims May Be Helping ISIS Cause »

Tomada, who has covered conflict in Afghanistan, Iraq, Libya, Yemen, and Syria since 2009, also described seeing between six to eight Western soldiers armed with suppressed sniper rifles and dressed in a combination of camouflage and khaki. All of them, he said, were Caucasian and spoke with American accents.

“I tried talking to them but they totally avoided me,” Tomada said. “They were posted on top of a house, and I think they were in charge of calling in airstrikes. At night, they’d leave in a convoy of white Land Cruisers.”

Task & Purpose reached out to the Pentagon to ask if U.S. troops were conducting operations within that area of Syria in the timeframe Tomado described.

“We are not going to discuss the location of U.S. special forces and whether or not they're in any particular area,” Army Maj. Roger M. Cabiness II, a Department of Defense spokesperson, told Task & Purpose via email. “We've said we have a small number of special forces that have been operating in Syria but we're not going to get into details that might expose them to risk.”

On Feb. 29, after weeks of intelligence gathering and preparation, the U.S. Army’s elite Delta Force — a key element of the Expeditionary Targeting Force — officially kicked off combat operations in Iraq to “target, capture, or kill ISIS operatives,” according to CNN.

“The only thing I'll say is the (Expeditionary Targeting Force) is in position, it is having an effect and operating, and I expect it to be a very effective part of our acceleration campaign,” Defense Secretary Ashton Carter told reporters on Feb 29.

Whether the U.S. special operations forces footprint in Syria will expand in the coming months remains to be seen (or will remain under wraps), but with Raqqa still under ISIS control, it seems very likely.

Right now, the focus is on Mosul, which is expected to be a far more brutal fight than anything anti-ISIS forces in Iraq have experienced thus far. Aside from being the country’s second-largest city, with a population of more than one million people, Mosul has been transformed into a virtual fortress since it fell to ISIS in 2014.

According to The New York Times, the push to retake the city could begin as soon as March.