How The War On ISIS Saved The A-10 From Retirement

The A-10 Warthog has become critical to the U.S. bombing campaign against Islamic State militants in Iraq and Syria, forcing... 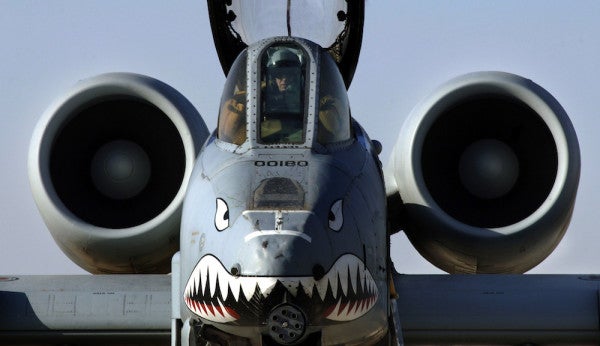 The A-10 Warthog has become critical to the U.S. bombing campaign against Islamic State militants in Iraq and Syria, forcing the Air Force to reconsider retiring the warplane, reported Defense One on Jan 13.

Rep. Martha McSally, a Republican from Arizona, said in a press statement on Jan. 13, “It appears the Administration is finally coming to its senses and recognizing the importance of A-10s to our troops’ lives and national security.”

The A-10’s delayed retirement marks a key policy shift that will be laid out next month when the Pentagon submits its fiscal year 2017 budget request to Congress. Though the Air Force has attempted for two years to retire the aircraft, it has proved incredibly difficult to shoot down politically; Congress blocked its retirement multiple times.

Air Combat Commander Gen. Mike Hostage said in a 2014 interview with Defense News, “I would dearly love to continue in the inventory because there are tactical problems out there that would be perfectly suited for the A-10. I have other ways to solve that tactical problem. It may not be as elegant as the A-10, but I can still get the job done.”

The Air Force has adamantly pushed for the retirement of the aircraft, citing budget concerns, particularly sequestration, for its decision.

Some, however, suggest that the desire to remove A-10 from the Air Force’s inventory runs much deeper.

In 2014, Tyler Rogoway, a writer with Foxtrot Alpha wrote, “Regardless of the Warthog's undeniable effectiveness on the battlefield the aircraft has always been the unwanted straight-winged stepchild of the USAF.”

Rogoway also suggested that the plan to retire the aircraft comes from the Air Force’s desire to field more stealthy, high-tech planes.

A report from the Government Accountability Office found although the service has estimated that retiring the aircraft would save $4.2 billion over five years, the “analysis found that the Air Force’s estimated savings are incomplete and may overstate or understate estimated savings.”

Despite its role across multiple operations, the Air Force still plans to retire the aircraft, though the question of when will be determined at a later date.

“With A-10s deployed in the Middle East to fight ISIS, in Europe to deter Russian aggression, and along the Korean Peninsula, administration officials can no longer deny how invaluable these planes are to our arsenal and military capabilities,” McSally said.