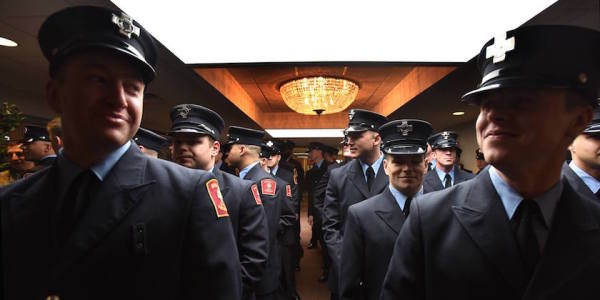 On April 5, 49 firefighters graduated from the Boston Firefighting Academy and were sworn in to the Boston Fire Department. All 49 graduates were military veterans, the Boston Globe reports.

Boston Mayor Martin Walsh and Fire Commissioner Joseph Finn presided over the swearing in ceremony, which was held in a banquet hall in the neighborhood of Dorchester.

“I’m proud that today 49 new members will join the Massachusetts firefighting family, and I’m confident this new class of recruits will carry on the Boston Fire Department tradition of excellence,” Walsh said.

“Everyone of these recruits is a veteran,” he noted. “We thank your families for supporting you, and we thank you for your service.”

While it is certainly remarkable that an entire graduating class was made up of veterans, it’s hardly surprising. As an employer, the Boston Fire Department places a high premium on military service.

To even be considered for a job with the department, applicants must first take a statewide aptitude test administered only once every two years. According to the City of Boston website, applicants who are “disabled veterans get preference first, followed by veterans.”

The graduation ceremony was held almost exactly three years after thousands of people lined the streets of Boston for the funeral procession of firefighter Michael R. Kennedy.

Kennedy, who died while fighting a fire in the city’s Back Bay neighborhood, was a Marine combat veteran of the Iraq War.

The 49 veterans who graduated from the academy now join more than 1,500 men and women in the ranks of the Boston Fire Department.

“I hear so much about the brotherhood and camaraderie of the force,” Kevin Oliver, a graduate who served in the Navy, told the Boston Globe. “I want to experience that and make those connections that last a lifetime, all while doing good and saving people.”